Having convincingly won their respective semi-finals, Kristoffersson and PSRX Volkswagen Sweden team-mate Petter Solberg battled side-by-side into Turn 1 on the Trois-Rivieres street circuit in the final.

Despite slightly edging the advantage on the outside, Solberg had to concede the race lead in the braking area for Turn 2.

In a bid to leapfrog the sister VW Polo, Solberg took his compulsory joker lap on the second tour and returned to the main circuit third, behind Timmy Hansen.

Aware of the speed that Solberg had displayed in his semi win, Kristoffersson elected to cover off his team-mate and rival by taking the joker lap next time.

He slotted back onto the main circuit behind Hansen, backing out of any potential contact with his compatriot, knowing he would retake the lead when Hansen took his extra route, which the Peugeot-Hansen driver duly did on the very next lap.

Kristoffersson and Solberg then ran in formation to the finish, Solberg moving off line on the long straight in a bid to distract his colleague but to no avail - as experienced circuit racer Kristoffersson sealed his fourth World RX win of 2017 and a fifth in a row for the Polo. 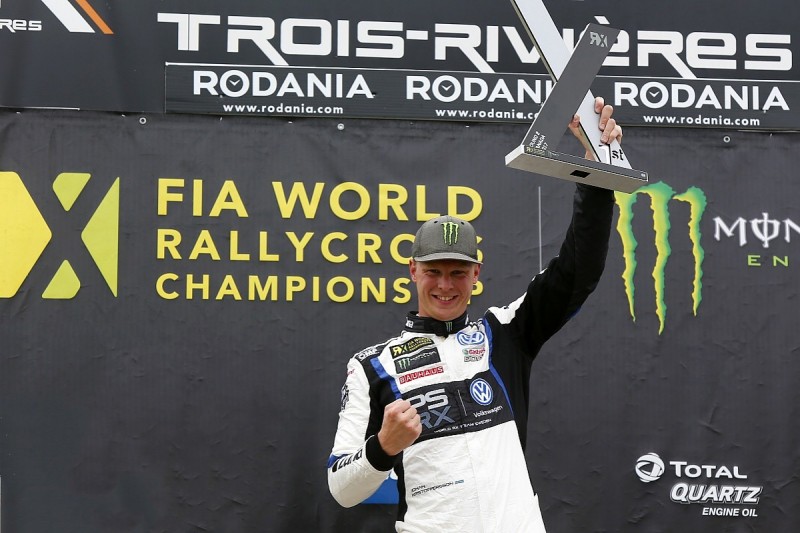 Hansen returned from the joker lap in front of team-mate Sebastien Loeb, but retired with a technical issue on lap five and elevated Loeb onto the podium ahead of MJP Racing Team Austria driver Kevin Eriksson.

EKS driver Toomas Heikkinen had a strong Canadian weekend and initially ran through behind the VWs in the final before a slow puncture dropped him back.

His reigning champion team-mate Mattias Ekstrom went out of the event in the semi-final stages, when a poor start due to a clutch problem dropped him from the front of the grid to the rear of the field.