"My main plan for 2015 is to defend my World RX title," revealed the Norwegian in a blog.

"It is guaranteed to be difficult to win again in 2015, but we have a good and developed plan to do it, and [2014's] world championship gold made me even hungrier for success."

Solberg became the first driver to win an FIA world title in two different disciplines last year when he added the RX crown to his 2003 World Rally Championship title.

He has been openly trying to attract manufacturer support to his Swedish based PSRX team, but made no reference to his planned car or team-mate for 2015 in his announcement, though he praised his team for its '14 efforts.

"In my new sport there were many drivers who dreamed of becoming the first ever world champion," said Solberg.

"But in the end my team was working the hardest, we played the smartest and did most things right on the way towards the goal.

"We made a plan and had small targets along the way during the season. We took calculated risks, we tried out new opportunities, we thought differently; we dreamed together and set common goals, and we reached our goals together."

Solberg believes his 2014 rallycross success has made him a better driver overall, and admitted he is eyeing outings elsewhere in 2015, including appearances in the WRC.

"Race victories and titles are doing something to me. I am 110 per cent sure that last year's season in rallycross has made me a better motorsport performer," he said.

"Therefore I have also toyed with the idea of driving a couple of WRC rounds if a good enough offer arises. 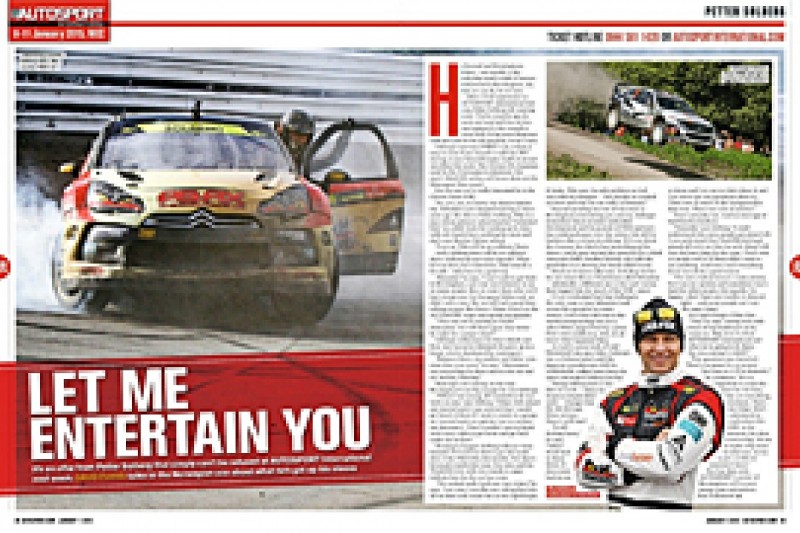 "I would also like to measure forces against GRC [America's Global Rallycross series] drivers in the X Games - and I want to win Race of Champions individually. The experience in Barbados before Christmas was really great.

"But on top of my list of wishes for 2015 is to retain my championship crown in rallycross."

Solberg will begin his 2015 season with an appearance at AUTOSPORT International at the NEC in Birmingham next week. His title winning Citroen DS3 will be on display, while he will perform in his Citroen Xsara WRC in the Live Action Arena.

For more on Solberg's plans for AUTOSPORT International, plus his reflections on rallycross success and why his WRC career waned, see DAVID EVANS' interview with him in this week's AUTOSPORT magazine.