The Japanese manufacturer has explained that it was this problem caused by damage to the underfloor plank and the rear wing that resulted in the pole-winning TS050 HYBRID losing contact with the Porsches that finished one-two in the race.

A statement from Toyota read: "Following analysis of the bodywork on the #7 TS050 HYBRID after the 6 Hours of Nurburgring, Toyota Gazoo Racing has identified the specific issue that caused an unexpected change in aerodynamic performance during the race.

"The pole-position-winning car had led the early stages but suffered a loss of performance in the middle of the race, which prevented it challenging the leading Porsches.

"Post-race investigation has revealed significant damage to the underfloor of the #7 car, as well as a hole in the rear wing, which caused cracks in the main plane during the race."

The team believed that the damage to the underfloor was caused by the car riding over the kerbs, while an unidentified piece of debris struck the leading edge of the rear wing.

The twin issues caused what Vasselon described as a migration of the front-rear aerodynamic balance during the race.

Kamui Kobayashi had led the opening stint in the #7 Toyota, but team-mate Jose Maria Lopez quickly dropped behind the two Porsches after taking over the car and then lost significant time during the second half of a double stint on a set of Michelins.

"When Jose Maria was losing time, it looked like it was tyre degradation, but it wasn't," said Toyota Motorsport GmbH technical director Pascal Vasselon. 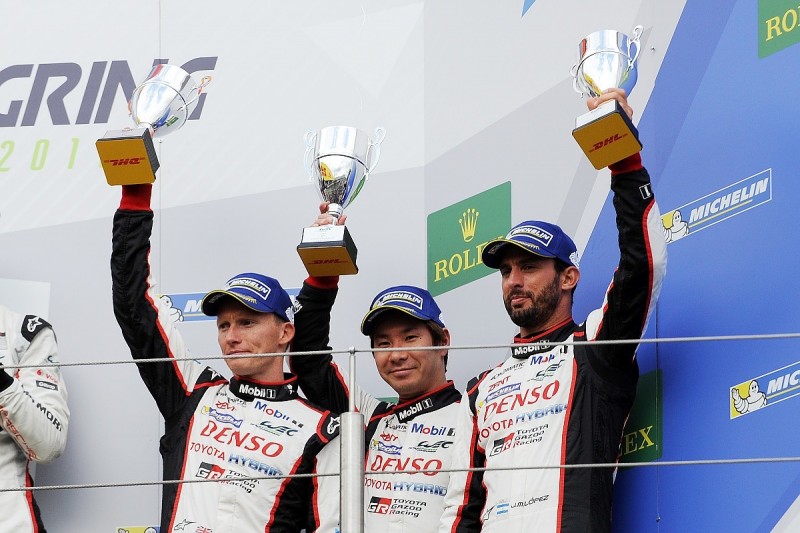 He described the German WEC round as a "lost opportunity" for Toyota.

"We were competitive for the first two hours, or one third of the race," he said.

"Yes, we were closer than expected, but on the other side it was a lost opportunity."

The #7 Toyota, which Mike Conway shared with Kobayashi and Lopez, ended up more than one minute behind the winning Porsche.

It failed sometime during the grid procedure, forcing Buemi to complete the formation lap in electric mode before pitting for the unit to be replaced.

The Porsche 919 Hybrid of Timo Bernhard, Brendon Hartley and Earl Bamber won the fourth round of the WEC after the German manufacturer invoked team orders in the final 10 minutes of the race.

The #1 car of Andre Lotterer, Neel Jani and Nick Tandy had been leading by just over 10 seconds, but was given an extra 20 seconds' worth of fuel during late splash-and-dash pitstops for the two cars in order to reverse the positions.