The McLaren Formula 1 racer will not drive the Toyota on track together with a full grid of cars before the Spa WEC superseason opener in May because the official pre-season Prologue test at Paul Ricard at the start of April clashes with the Bahrain Grand Prix.

Toyota Motorsport boss Pascal Vasselon said that Alonso's participation in the Daytona 24 Hours last month with the United Autosports LMP2 team and the prowess he displayed in traffic meant the team had no concerns with him missing the Ricard test.

"He will be less experienced in traffic than his team-mates and Spa will be his first experience of this in our car," Vasselon told Autosport.

"But he has already learnt about this at Daytona, so we have no concerns about this."

Vasselon said Alonso had shown an aptitude for the specific demands of endurance racing and was fitting in well with the Toyota LMP1 squad and his new team-mates.

"He understands what endurance is about and what his duties are," explained Vasselon. 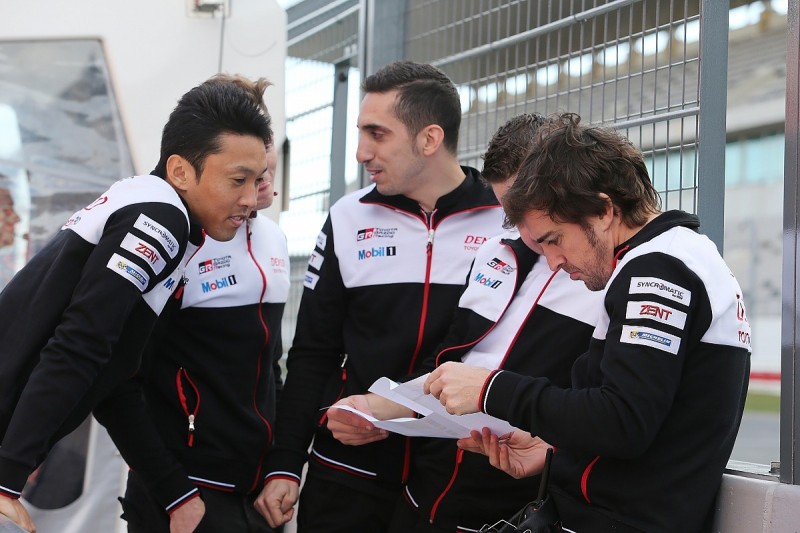 Alonso revealed during his second endurance test with Toyota this week at the Algarve circuit in Portugal that he had found the team very welcoming.

"The atmosphere in the team is amazing," he said.

"From the first day everyone was very friendly with me: we have a WhatsApp group in which we are constantly chatting."

Kazuki Nakajima and Kamui Kobayashi will also miss the Ricard test because they will be on the duty with Toyota's Lexus brand in the Super GT Series opener at Okayama.

All six Toyota drivers, plus test and reserve Anthony Davidson, are taking part in the Algarve endurance simulation this week.

The team undertook a day's performance testing on Monday before embarking on a 30-hour run on Tuesday morning.

The test continued through last night and is scheduled to end this afternoon.

Toyota has one further endurance test scheduled ahead of the Prologue on April 6-7.