Brendon Hartley's time of 1m41.289s set during the Friday night session stood as the fastest lap of the test on Friday and Saturday.

The other two drivers in the #20 Porsche, Timo Bernhard and Mark Webber, also dipped under the 1m42s mark during the course of the first day.

The second fastest car over the two days was the #2 Audi R18 e-tron quattro in which Andre Lotterer set a best time of 1m42.073s on Friday afternoon.

That just edged out Romain Dumas, whose time of 1m42.126s put the #14 Porsche third in the final times.

Fourth fastest was the best of the Toyota TS040 HYBRIDs, the #7 car which ended up on a 1m42.356s set on Friday afternoon.

The two slower, Saturday sessions were headed by the two Audis: Tom Kristensen was quickest in the #1 Audi car in the morning on a 1m43.017s; and Marcel Fassler in #2 with a 1m43.423s in the afternoon.

Each of the factory teams played down the significance of the test, each insisting that it was sticking to its own test and development programme.

The three manufacturers were also running their cars in different aerodynamic configurations: Porsche was running low downforce, Toyota had one TS040 in Le Mans aero configuration and one in sprint spec, and Audi tested with high-downforce aerodynamics.

The results of the test were further confused over the fuel allocation awarded to the turbodiesel Audi and the Porsche and the Toyota.

The FIA and the Automobile Club de l'Ouest insisted that the allocations of fuel that govern performance under the new energy-based rule book have been set in stone prior to the test, but declined to publish them over the course of the two days. 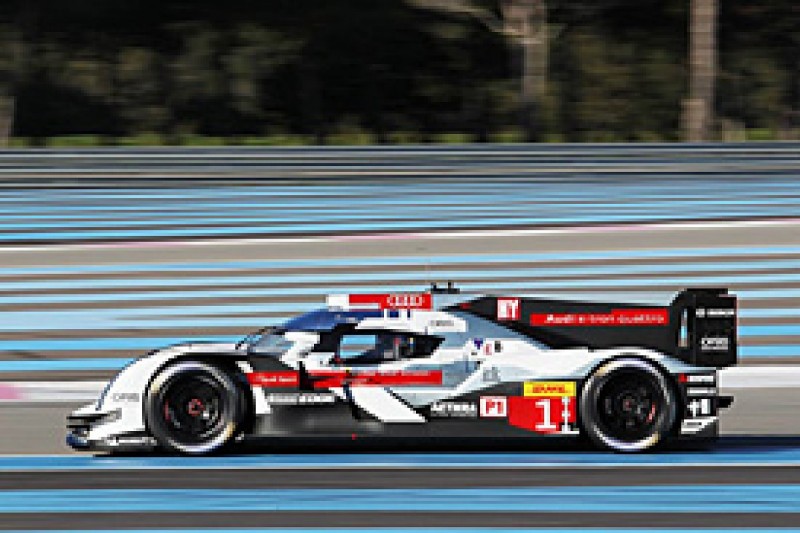 One conclusion that can be drawn is that Porsche, which undertook its first endurance test at Ricard earlier this week, looks reliable: the two 919s ran without significant problems until the final of the five sessions when an engine problem delayed the #14 car, which then lost a wheel on its first lap out of the pits.

Fastest in LMP2 was the Millennium/Delta ORECA-Nissan 03 driven by Shinji Nakano.

The Japanese driver's best time of 1m49.970s was a tenth quicker than Olivier Pla's fastest time in the G-Drive/OAK Morgan-Nissan LMP2.

Both Millennium/Delta, which had two cars present, and G-Drive/OAK limited their running because the rules dictated that they must run one of the three engines they are permitted for the season.

The factory Manthey Porsche team, which had just one 911 RSR present after a shunt during the marque's test earlier in the week, headed the GTE Pro times.

The car was fastest in class in three of the four sessions in which it ran, with Richard Lietz ending up with a best of 1m58.080s from Friday morning.

Paolo Ruberti was quickest in the GTE Am class on a 1m58.570s in the AF Corse-run 8Star Ferrari 458 Italia.