The #19 919 Hybrid moved to prominence through the night, with stints from Hulkenberg and Tandy hauling it back into contention after it lost some ground during an early safety car period.

Bamber then picked up the mantle in the early hours of the morning, and as Sunday progressed any threat from Audi behind crumbled as all three of its cars required unscheduled pitstops.

All that was left after that was for Porsche to nurse its #19 and #17 home to a one-two finish, including taking care during a light rainshower in the final 10 minutes.

The third-placed #7 Audi, which was in the thick of the lead battle with the #19 Porsche through the night, slipped back when it lost a chunk of its bodywork, and it would later require further unscheduled stops for an oil top up and further checks to the engine cover.

That left the #9 Audi leading the chase of the #19 and #17 Porsches that assumed the top two places, but that car's challenge ended when it spent nearly 20 minutes in the garage to have a front driveshaft changed.

The problems for the other two Audis weren't enough for the #8 car - which was crashed early in the race when Loic Duval tried to avoid a clutch of GT cars approaching a slow zone - to get ahead, as it had to make an unscheduled stop of its own for a change of engine cover, losing two minutes.

The #17 Porsche was in the lead fight in the first part of the race, but it fell out of direct contention after Mark Webber was forced to serve a one-minute penalty due to a yellow flag infringement by Brendon Hartley in a previous stint.

The third Porsche - which started on pole courtesy of Neel Jani, dropped down the order when Romain Dumas and Jani both committed the same error in consecutive stints - locking up and gently hitting the tyre wall head-on at Mulsanne corner in the night.

Both incidents required a change of front bodywork, and in the case of Jani the delays were longer because he got the #18 car stuck in the gravel when trying to reverse back onto the track.

The long stop for the #9 Audi on Sunday morning allowed a Toyota into the top six, after the Japanese marque's two cars spent the majority of the race running a distant seventh and eighth.

It was the #2 car of Alex Wurz, Mike Conway and Stephane Sarrazin that capitalised, with the #1 entry too far back after Anthony Davidson damaged the car colliding with traffic and then hitting the wall on Saturday evening.

Further back in the field there was no repeat of Rebellion Racing's fourth-place heroics from 2014, with its cars finishing 18th and 23rd overall, both still running at the finish.

The privateer team at least claimed the scalp of Nissan, which persevered with its troublesome radical GT-R LM NISMOs throughout the race, eventually getting the #22 machine to the chequered flag.

That car had been the most competitive in the early hours of the race, but through the night all three Nissans made regular visits to the pit garages.

The #21 car was the first to fall when a suspension failure left it stranded on track, while a gearbox failure forced Jann Mardenborough to stop the #23 entry on Sunday afternoon. 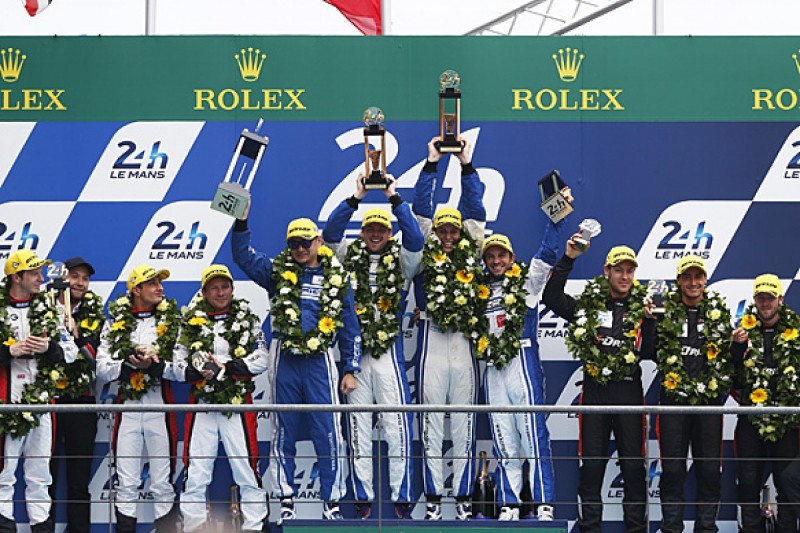 The line-up of Nicolas Lapierre, Richard Bradley and Matt Howson led the class at the end of every hour and at one stage had a lap on the entire field.

However two Sunday incidents threatened to rain on its parade - the first when the ORECA 05 stopped on-track for two minutes when Bradley overshot Mulsanne and realised the car had lost reverse, the other when Lapierre fell off the road at Indianapolis during the 22nd hour.

They managed the rest of the race accordingly, and Bradley crossed the line to secure a 50-second victory.

TDS Racing had been KCMG's closest challenger for the first half of the race, especially when Tristan Gommendy was behind the wheel.

Their campaign ended in the early hours of Sunday morning, though, when Gommendy was collected by the #99 GTE Aston of Fernando Rees.

Sam Bird led G-Drive (OAK) Racing's campaign and kept KCMG honest on Sunday, until he was passed during the penultimate hour by Oliver Turvey in the Jota Sport Gibson.

Jota's race, like in 2014, started in auspicious circumstances, losing three laps in the first hour with a gearshift problem, but Turvey, Mitch Evans and Simon Dolan persevered to reach the podium. 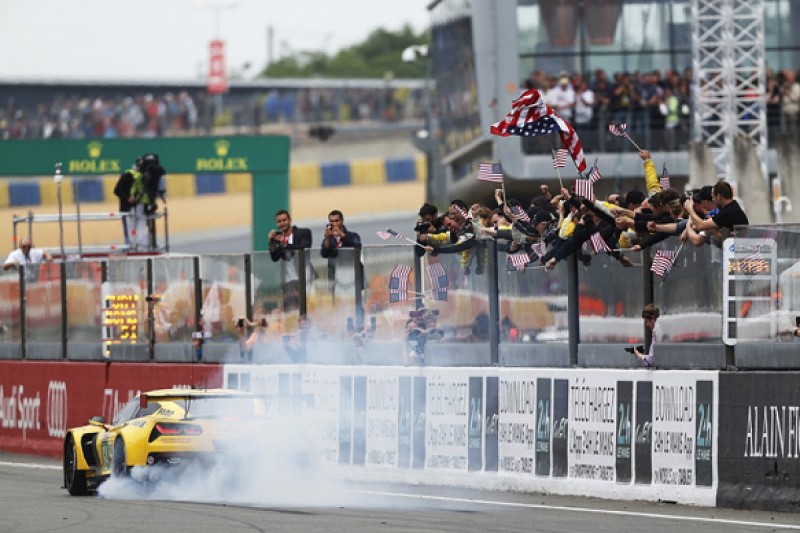 Corvette's lone entry prevailed in an attrition-hit GTE Pro race, in which every other car hit mechanical trouble.

A qualifying crash forced the withdrawal of the #63 C7.R, but Oliver Gavin, Tommy Milner and Jordan Taylor picked up the baton in the #64.

An early pitstop delay for the #95 Aston Martin Racing Vantage and a dramatic fire for the #92 Manthey Porsche 911 RSR set the tone, and Corvette was left to duel with the two remaining AMR cars and the #51 AF Corse Ferrari for victory.

Two Astons became none overnight. The #97 Aston was first of the leaders to go, suffering an engine failure not long after night fell, and the #99 dropped back in the early hours of the morning when Fernando Rees crashed into an LMP2 car.

With Porsche's remaining #91 911 dropping out of contention with a gearbox leak in the 21st hour, Corvette and Ferrari were left in a straight fight for the win.

Gianmaria Bruni hit the front with two hours to go but a gearbox problem consigned the 458 Italia to a 30-minute stay in the pits and dropped it to third.

It meant Gavin had a clean run in the last hour and a half to end up five laps clear of the #71 Ferrari of James Calado, Davide Rigon and Olivier Beretta, which was out of victory contention early on when it lost four laps to get the alternator replaced.

It looked as though Aston's reprieve would come via GTE Am, where a dominant performance from the #98 Vantage was less than an hour away from a deserved victory.

That was until Paul Dalla Lana ploughed into the barrier after spearing left on the entry to the Ford chicane in a bizarre incident that ended the Aston's race immediately.

That opened the door for the Victor Shaitar/Andrea Bertolini/Aleksey Basov #72 SMP Ferrari to come through to win, despite being briefly beached in the gravel on Sunday morning when Shaitar went straight on at Indianpolis.

The 458 Italia won by two laps from the Dempsey-Proton Porsche 911 RSR and the #62 Scuderia Corsa Ferrari.