Brendon Hartley topped the times aboard the #8 Toyota TS050 HYBRID in the opening minutes of the 60-minute session with a 1m43.557s.

The #7 entry with Mike Conway at the wheel was held in the pits for five minutes for a yellow-flag infringement in FP2 and then posted 1m43.659s, just 0.102s slower than the sister car.

It was the second time in the three sessions of practice that the #8 Toyota had set the pace, despite carrying a 0.54s performance penalty under the LMP1 success handicap system.

Kazuki Nakajima had a brief spin in the #8 Toyota during the session.

Jackie Chan DC Racing led the way in LMP2 courtesy of a 1m48.598s from Will Stevens in the team's ORECA-Gibson 07.

That put the Jota-run entry a couple of tenths up on the United Autosports ORECA in which Phil Hanson got down to a 1m48.810s.

The Signatech Alpine ORECA took third in the class times with Thomas Laurent, who posted a 1m49.134s.

Antonio Felix da Costa ended up fourth in the ORECA run under the Jota Sport banner with a 1m49.767s. 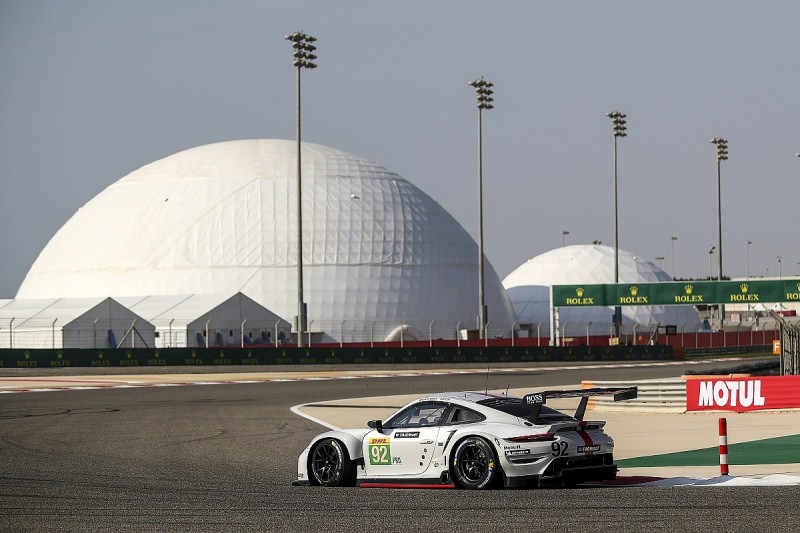 Porsche led the way in GTE Pro for the first time of the Bahrain meeting.

Michael Christensen ended up fastest in the best of the factory Porsche 911 RSRs with a 1m56.790s lap set early in the session.

That put the Dane nearly a second up on the second-placed Aston Martin Vantage GTE in which Nicki Thiim managed 1m57.709s.

James Calado was third fastest for Ferrari to make it three manufacturers in the top three. The Brit set a 1m57.964s in the best of the AF Corse-run Ferrari 488 GTE Evos.

A 1m58.321s put Maxime Martin fourth in the second Aston.

The GTE Am division was led by the Aston Martin Racing entry in which Ross Gunn posted a 1m57.947s, with Nicklas Nielsen second in class in the #83 AF-run Ferrari.

Qualifying for the eighth round of the 2019/20 WEC campaign begins at 6:00pm local time.