Marcel Fassler and Andre Lotterer took pole position aboard the #7 Audi R18 e-tron quattro with a 1m45.842s average that put them 0.141 seconds up on team-mates Loic Duval and Oliver Jarvis.

Fassler was fastest on the first runs with a 1m45.798s until losing the time for exceeding his fuel allocation for the lap.

Lotterer set the fastest lap of the session with a 1m45.703s, a time that eclipsed the best from Jarvis by three tenths after the Briton hit traffic on two of his three laps.

The #1 Porsche 919 Hybrid of Timo Bernhard and Brendon Hartley took third position with a 1m46.560s average.

The second Porsche in which Neel Jani had led the chase of the Audis in the first runs was third until the best lap from Romain Dumas was deleted for a track limits violation.

That allowed Toyota to take fourth with an average of 1m47.218s from Mike Conway and Kamui Kobayashi

Kazuki Nakajima and Sebastien Buemi took sixth in the second TS050 HYBRID, which like its sister car only used one set of tyres.

The championship-leading Signatech Alpine LMP2 team took its first class pole of the season with Gustavo Menezes and Nicolas Lapierre.

They ended up with a 1m55.582s average aboard their ORECA-Nissan 05, which put them nearly a second up on the Manor ORECA qualified by Roberto Merhi and Matt Rao.

The RGR Sport Ligier-Nissan JSP2 of Bruno Senna and Ricardo Gonzalez was a further half second back in third.

The G-Drive Racing ORECA that has been on pole four times this season will line up last of the P2 runners after Alex Brundle lost all his times for repeated track limits violations. 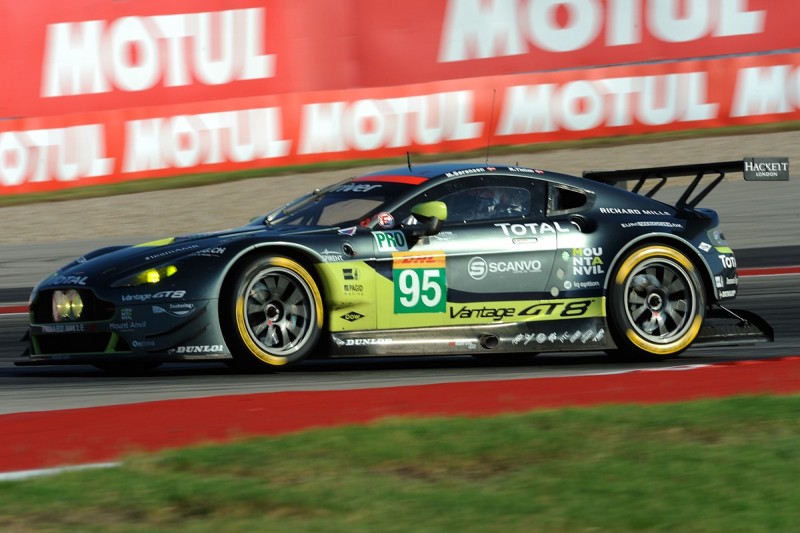 Sorensen had been within five hundredths of the two AF Corse Ferraris that led the way after the first runs, before Thiim went a tenth faster than his team-mate in the #95 Aston Martin Vantage GTE.

The Ganassi Ford squad, which had topped two of the free practice sessions, took third with Stefan Mucke and Olivier Pla on a 2m04.804s average.

Gianmaria Bruni set the fastest lap of the session in the other Ferrari, but James Calado was unable to get within half a second of his co-driver, dropping the car to fourth.

Pedro Lamy and Paul Dalla Lana claimed qualifying honours in GTE Am for Aston Martin despite failure of their traction control system.