Eliseo Salazar was due to be the third man in the Jaguar that would go on to win the 1990 Le Mans 24 Hours. But, in a cruel twist, the race that should have been the high point of his career instead became one of the most bitter, as ADAM COOPER recalls

When the 1990 Le Mans-winning Jaguar comes out of hibernation, for display at a motor show or a Goodwood demonstration run, it displays a strange anomaly. The record books show that the event was won by John Nielsen, Price Cobb and Martin Brundle. And yet on the #3 XJR-12 itself there's no evidence of the last of those names.

Instead the roof bears the legend "Eliseo Salazar", together with a little Chilean flag. Salazar did indeed qualify the car, but he never actually drove it in the race. The Jaguar with his name on was heading for a famous victory when, shortly before he was due to jump aboard, he was bumped out in favour of team veteran Brundle.

It was a hard but perhaps understandable decision, typical of pragmatic team boss Tom Walkinshaw. But its effect on Salazar, one of the nicest guys you'll meet in racing, was incalculable.

The story started the year before, when Salazar first became involved with the Jaguar team. TWR always had to find extra drivers for its multi-car onslaughts at Le Mans and, in 1989, Salazar's name came up. 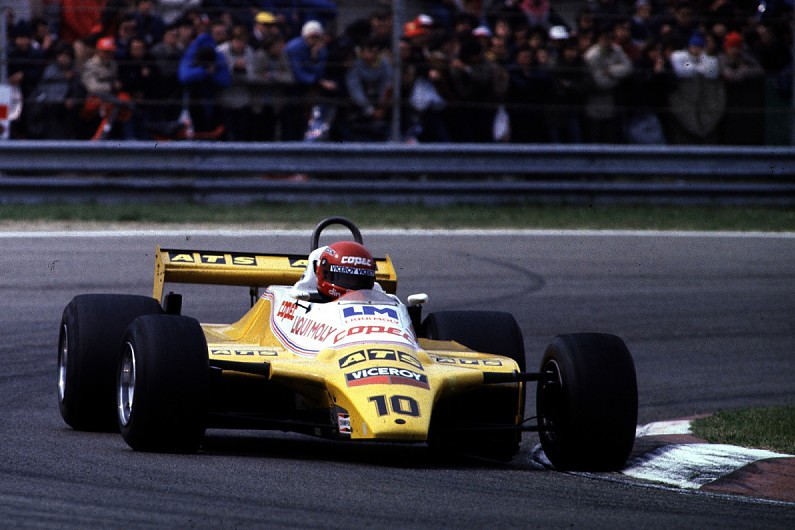 He'd never had a decent car, but he'd scored points, taking a sixth at Zandvoort in 1981 and fifth at Imola the following year in a field weakened by the absence of the FOCA-aligned teams amid a row with FISA. That was also the season that he became involved in an infamous clash with Nelson Piquet at Hockenheim that would overshadow his on-track achievements.

After running out of options in F1 and even briefly trying the new Formula 3000 category, taking a works Lola to fourth in the wet at the 1986 Birmingham Superprix, he re-emerged in sportscar racing with the works Spice Engineering team in 1988, winning the C2 class at Fuji.

Then an impressive Jaguar test at Dijon led to a seat in the 1989 24 Hours line-up, and sharing with brothers Michel and Alain Ferte, he finished eighth after gearbox delays. Not all of Walkinshaw's Le Mans selections did well enough to get a second chance - tardy IMSA racer Jeff Kline wasn't invited back after joining the roster for 1989 - so the fact that Salazar did make the cut for 1990 was an indication that he'd done a good job.

"They said they were worried about Price and felt that he wasn't going to be physically fine at night, so they wanted him to double or triple stints at the beginning, and then it would be me later. That turned out to be very bad" Eliseo Salazar

This time he was placed with Jaguar veterans Nielsen and Cobb. They were the stars of the marque's Castrol-backed IMSA effort, and their car was prepared and run by the Tony Dowe-led American team. Jaguar approached qualifying in conservative fashion, and the cars started seventh, eighth, ninth and 17th; they left the pole battle to the turbocharged Nissans, Porsches and Toyotas, which was won by Nissan's Mark Blundell.

PLUS: When Le Mans made its most controversial change

Before the race, Walkinshaw and his senior staff considered every possible scenario. They had one serious problem. New recruit Luis Perez Sala had proved to be hopelessly slow in the #4 car (below) he shared with Davy Jones and Michel Ferte, despite his F1 background with Minardi.

It was decided to keep the Spaniard as a reserve, but in truth there was little chance of him actually getting any seat time come the race. Walkinshaw also decided not to use Salazar in the early stages of the race. The rules restricted each car to just three drivers, so by keeping two on the sidelines the team gave itself more options to do some swapping around later on.

"What they said was they were worried about Price," Salazar recalls. "He'd been sick, and they felt that he wasn't going to be physically fine at night, so they wanted him to double or triple stints at the beginning, and then it would be me later. That turned out to be very bad under the circumstances..." 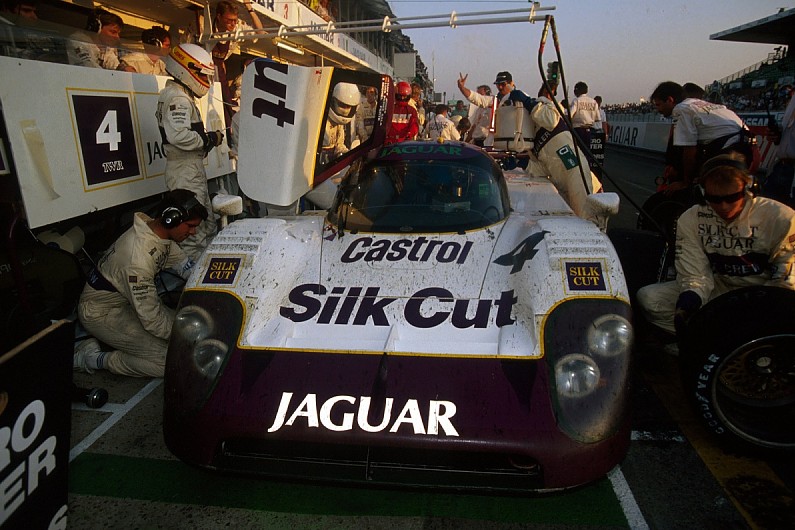 After a cautious start, the Jaguars gradually worked their way up the order, benefiting as others hit trouble. The #1 car of Brundle, Alain Ferte and David Leslie climbed into the lead but, shortly before midnight, a water leak caused a delay. Brundle, Walkinshaw's favourite son, seemed to have lost all hope of winning - at least with that car.

However, two of the other three entries had only been handled by two drivers, and thus each still had a spare seat. As Brundle rested through the night, Walkinshaw kept a close eye on the surviving cars. Salazar and Sala hung around, awaiting their turn, although the latter was wasting his time.

As the race went into dawn, so events began to shape Walkinshaw's plans. Brundle's already delayed car retired for good, and the team's quickest driver was therefore available, and fully rested. The Jones/Michel Ferte car, which the hapless Sala was supposed to drive, was several laps down. Holding a strong lead was the #3 Nielsen and Cobb machine. In the pits, an expectant Salazar could see his dreams coming true as he waited for his first turn at the wheel. But then he was summoned by the team boss...

"Tom called me to his motorhome," Salazar says. "It was just the two of us. He said it was very important for him and the team to have Martin in the leading car. I understood it from the business point of view, I'm a business guy too. But I pledged to him, and I said Tom, this is my life, it's very important for me as a driver. This was my big chance.

"There was a point when he was undecided, I had nearly convinced him. I really went for it! At the time we didn't know it was going to win, there was still maybe half the race to go. He thought for a while, and he said 'I like you and I want you to do well, but I have to do it.'

"'It's Martin, it's Jaguar, there are 50,000 fans out there, and he's a British guy.' He asked me to drive number four, which meant Luis Perez Sala didn't drive at all. But that car was two or three laps down, and there was no chance."

At around 8.10am Nielsen brought the leading Jag in, and a fresh and very motivated Brundle hopped aboard. The car was in a delicate condition, having lost fourth gear, and that also perhaps helped to explain why Walkinshaw considered that Brundle was the best man available to bring it safely home. 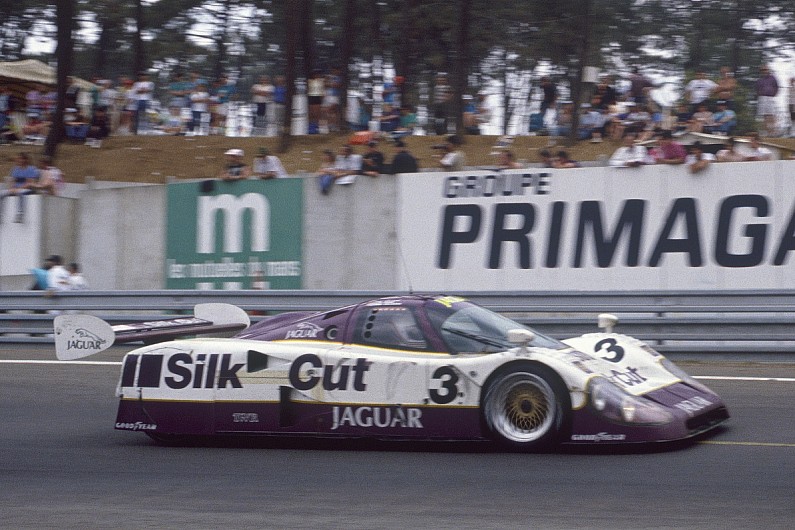 But that was of little consolation to poor Salazar, who had to wait in frustration until 10.21am before he was able to take over from Michel Ferte in #4, which by now was down in 11th place. Fired by adrenaline and anger, he immediately set some startlingly fast laps, to prove a point.

"At the time I got in the car I was obviously disappointed," he recalls, "and I was mad also, so I was driving fast. I caught Martin quickly and I was going to pass him just to unlap myself by a lap, but they came on the radio and said stay behind. So I had to."

"It could have been one of the highest points of my life, but it ended up being the lowest" Eliseo Salazar

A couple of hours later engine failure forced him to stop on the Mulsanne Straight. Meanwhile at 4pm his would-be crew mate Nielsen crossed the line to take the chequered flag. As the Dane celebrated on the podium with Cobb and Brundle, Salazar sat quietly in a team caravan with his then-wife. When I got there, both were in tears. "Come in and cry with us," he sighed. It was easy to understand the emotions.

"It could have been one of the highest points of my life, but it ended up being the lowest," he says. "The whole extent of the deal became apparent later on when the car won. What if the car had retired? Then I wouldn't have lost anything. So afterwards I was very disappointed. You don't get many chances like that.

"It was a big blow to my career, and actually after that I didn't race again for a few years. I did a couple of races with Spice to finish the season, but then they stopped, and I went back to Chile. Eventually I had an opportunity at the end of '93, when Gianpiero Moretti asked me to test his new Ferrari 333SP, and I went to Fiorano."

Salazar became one of the leading lights of IMSA's new World Sportscar category, forerunner of the American Le Mans Series. Subsequently he moved to Indycars, finishing fourth in the 1995 Indianapolis 500 - the last race with a full CART field. He then competed in the IRL, winning a race at Las Vegas in 1997, and qualifying and finishing third at Indy in 2000 for AJ Foyt Racing (below).

He continued to compete in all kind of categories, and eventually he could claim to have taken part in the Monaco GP, the Indy 500, the Le Mans and Daytona 24 Hours, and the Dakar rally - some years before Fernando Alonso could say the same. 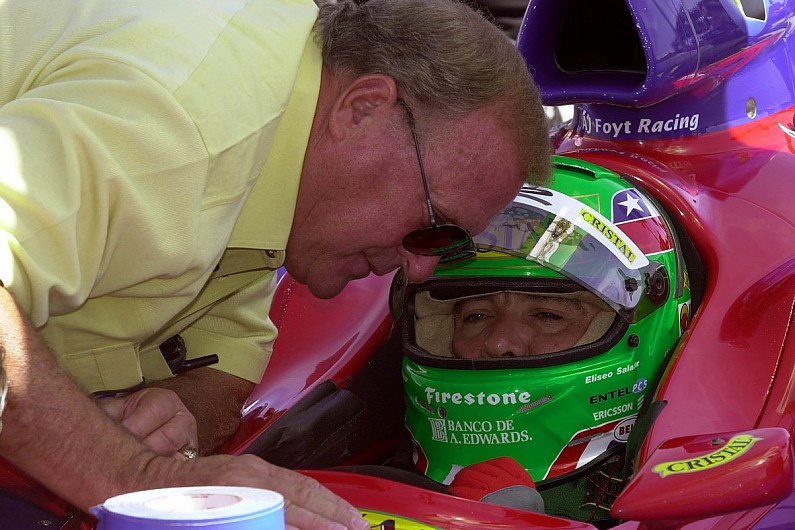 In fact he's also contested a World Rally Championship round - finishing 12th on Rally Argentina in 2012 - something that Alonso has yet to do.

In recent years he's worked closely with the FIA, helping to bring Formula E to Chile, and served as a steward at F1 races. He's put the Le Mans disappointment behind him.

"At the time, of course, it was devastating," he says. "But the rest of my motor racing life and my IndyCar career afterwards was very rewarding, and Le Mans became just a memory. Anyhow I respected Tom a lot, I was so sorry to hear about his passing [in 2010], and I will always be grateful for the opportunity he gave me."

One aspect of that 1990 weekend still nags at him, however: "In qualifying at night drivers had to do at least one lap. Tom asked us to be careful and just complete it.

"On my turn there was an accident, and I went by slowly losing maybe 10 seconds, so my time didn't reflect my speed. Afterwards I wondered if they thought I was slow at night..." 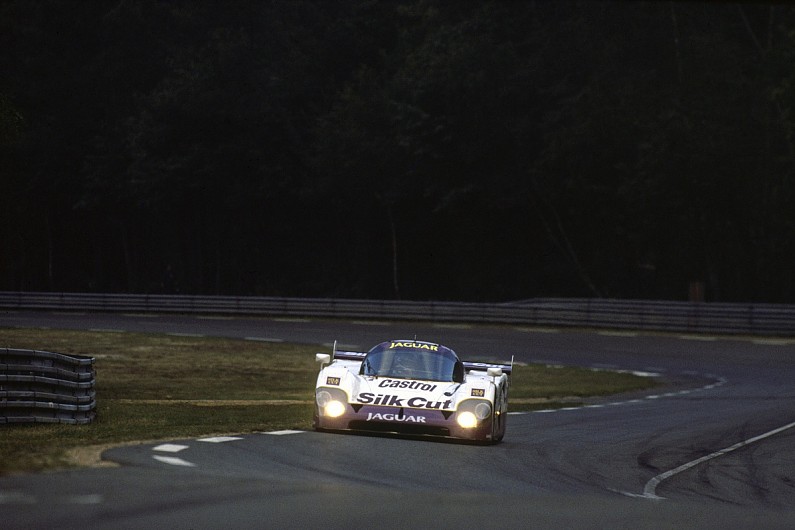