Porsche again intends to field four cars in the GTE Pro class at the Le Mans 24 Hours next year.

The German manufacturer plans to field two cars run by the CORE Autosport IMSA SportsCar Championship factory squad for the 2019/20 World Endurance Championship finale next June to alongside its pair of regular entries in the series.

It would be the third Le Mans in succession that Porsche has been represented by four cars in the French enduro should the additional entries be accepted.

The continuation of its four-car Le Mans attack was announced at the Porsche Night of Champions prize-giving event at its Weissach development and motorsport facility near Stuttgart.

The 38-year-old, who also won the WEC title on two occasions, will no longer be a factory driver, but will move into an ambassadorial position.

Jorg Bergmeister, a five-time American Le Mans Series class champion with Porsche, is making the same move at the age of 43. 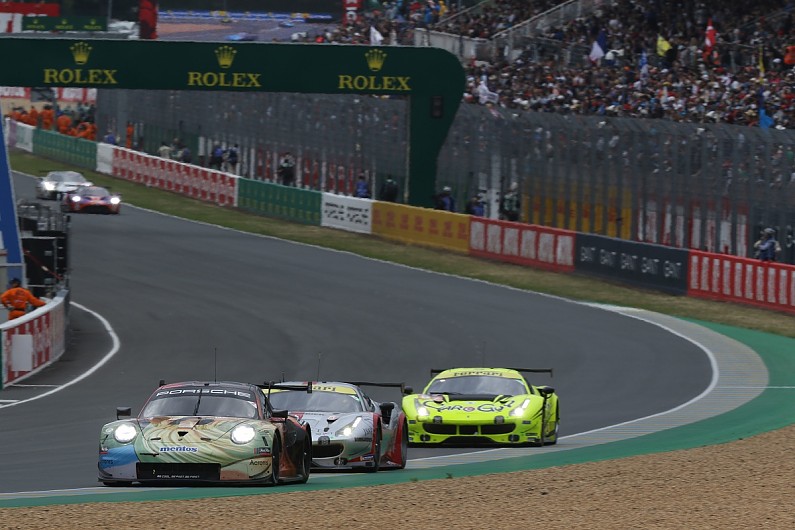 Australian Matt Campbell and Frenchman Mathieu Jaminet have been promoted from 'young professional' status to join what is now an 18-strong roster of full works Porsche drivers.

Frederic Makowiecki will partner Nick Tandy next season at in the CORE-run IMSA GT Le Mans class squad, which will switch to the second-generation Porsche 911 RSR that made its debut at the start of the 2019/20 WEC in September.

He replaces fellow Frenchman Patrick Pilet, who has driven together with Tandy in North America since 2015 and will now move onto Porsche's Intercontinental GT Challenge programme.

It will be Makowiecki's first full season in a GTE Porsche since he contested the 2017 WEC.

Tandy and Makowiecki will be joined by Campbell for the long-distance IMSA rounds, starting with next month's season-opening Daytona 24 Hours.

Jaminet will contest the enduros alongside 2019 GTLM champions Laurens Vanthoor and Earl Bamber.

Porsche Formula E development drivers Simona de Silvestro and Thomas Preining have both been given GT programmes for next season.

De Silvestro will race in the ADAC GT Masters series with Bernhard's eponymous team, while Preining will drive in the IGTC and the GT World Challenge Europe Endurance Cup alongside his GTE Am WEC programme with Dempsey-Proton Racing.