Reigning champions Marcel Fassler, Andre Lotterer and Benoit Treluyer claimed victory in the Sao Paulo 6 Hours for Audi to close the gap at the head of the World Endurance Championship.

The battle for victory in Brazil became an all-Audi affair little more than half an hour in to the race when the solo Toyota TS030 HYBRID driven by Stephane Sarrazin was taken out by Dominik Kraihamer's Lotus-Praga T128 LMP2 (pictured below).

McNish had taken the lead from the pole-winning Audi in the hands of Fassler away from the start and built a lead of eight seconds when the safety car came out as a result of the Sarrazin/Kraihamer incident.

The positions of the two Audis was reversed during the protracted yellow-flag period after Tom Kristensen took over the #2 car and was caught behind a slow car. This allowed Lotterer, who took over one lap later, to jump ahead.

Lotterer was able to pull an 18-second gap to Kristensen over the following double stint, a gap that grew to just over half a minute when Treluyer and Duval took over their respective Audis.

Duval reduced the gap to as little as 22s before losing the right rear wheel as he left the pits in the middle of his stint.

The car lost a lap as a result and then more time with two stop-go penalties: one of 30s for speeding in the pits and one of 60s for an unsafe release.

"I was able to build a gap to Tom, but you never know what is going to happen," said Lotterer. "It was very hard to keep the tyres working out there, so things could have changed around.

"In the end it is a win and this is what we have to do four more times to successfully defend our title."

The Rebellion Racing team took its first overall podium in the WEC with its Lola-Toyota B12/60 shared by Nick Heidfeld, Nicolas Prost and Mathias Beche.

The #26 G-Drive/Delta-ADR ORECA-Nissan 03 shared by Mike Conway, Roman Rusinov and John Martin dominated the LMP2 division on the way to fourth overall. 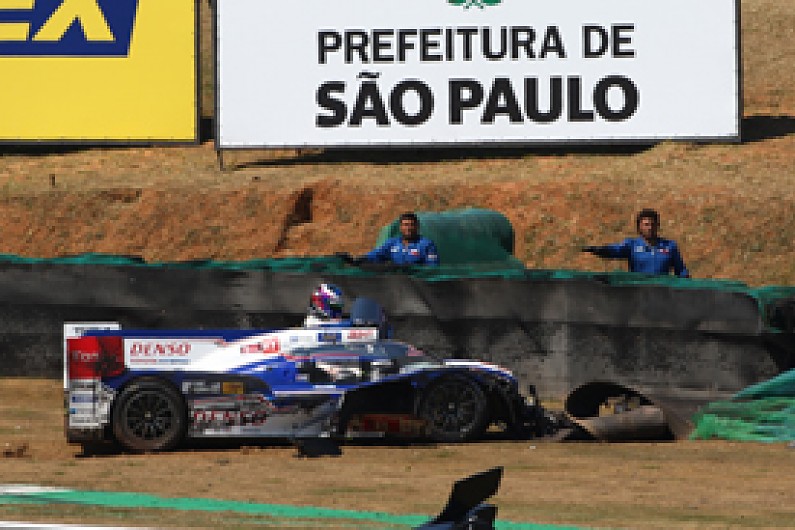 The pole-winning P2 car had a clear edge over its opposition as it cruised to a one-lap victory over the OAK Racing Morgan-Nissan LMP2 shared by Bertrand Baguette, Martin Plowman and Ricardo Gonzalez.

The margin of victory in GTE Pro was just 1.4s in favour of the AF Corse Ferrari 458 Italia shared by Gianmaria Bruni and Giancarlo Fisichella, which was chased for the better part of the race by the lead Aston Martin Vantage GTE of Stefan Mucke and Darren Turner.

GTE Am honours went to the Aston shared by Jamie Campbell-Walter and Stuart Hall, which inherited the lead when the sister car driven by Nicki Thiim, Kristian Poulsen and Christoffer Nygaard lost a wheel late in the race.

Victory for Fassler, Lotterer and Treluyer means they have closed the 30-point gap to their team-mates to 22 points.