After its IndyCar rejection, the radical DeltaWing became a Le Mans contender - winning the hearts of fans and intriguing the rest of motorsport in the process. During the build-up to the 2012 24 Hours in June, DeltaWing creator Ben Bowlby gave Stuart Codling an in-depth guide to the theories and technology behind the unique machine...

They said it couldn't be done - that it wouldn't go around corners, for a start. When the ACO announced 12 months ago that the DeltaWing would be the first car to occupy the 'Garage 56' slot, running outside the rules to showcase innovative motorsport technologies, professionals and armchair experts alike united to heap derision upon the project.

Former Lola designer Ben Bowlby and his allies - Highcroft Racing boss Duncan Dayton, racing legend Dan Gurney and US motorsport magnate Don Panoz - persisted, though, and with surprisingly little investment brought the project to fruition. The results are showing already: the DeltaWing has already exceeded the performance targets set by the ACO and demonstrated to spectators around the Circuit de la Sarthe that, yes, it can turn.

At first glance the DeltaWing's dart-like configuration - wide rear, narrow front - looks like a recipe for chronic understeer. But as Bowlby explains, racing car dynamics are a lot more sophisticated and flexible than they seem to the layman.

"You can make a high-performance car work if the mass, the tyre capacity and the aero distribution are in harmony. You can play a balancing game just like an aircraft or a seesaw does, in that you can move mass from one end to the other if you chase it with the tyre capacity and, if it's a downforce-creating car, with the aero capacity.

"So the DeltaWing is a very unlikely set of parameters that give us the best possible efficiency for a given mass of car.

"Ignoring four-wheel drive, which is expensive and quite heavy but has a lot of advantages for performance using all four of your tyres, if you're going two-wheel drive you'll want to drive the rear tyres. Like a dragster, you don't try and pull it from the front, you push it from the back. You need the weight transfer to get the traction. It also means that your high speed, with the layout we've got, has a much more rearward centre of drag and pressure. So the car has intrinsic stability, it's like a dart.

"From an aerodynamic and tyre capacity standpoint the DeltaWing has a very high degree of stability, which is very important because for cornering all the roll stiffness is at the back. When you have lateral g on the car, the two front tyres see no weight transfer because the rear does all the work. 95 or 97 per cent of the roll stiffness occurs across the rear axle. The front is just like one tyre.

"That's why, as you approach the limit of adhesion, the car goes towards oversteer - contrary to the initial perception everybody had that it would understeer. What we have is a car that's quite oversteery from a handling perspective but which has an enormous stability margin aerodynamically."

Getting the handling right

The DeltaWing's rearward weight bias made for a unique set of challenges. Bowlby and his team originally envisaged using a torque-vectoring differential to assist cornering but that had to be shelved while they focused on curing teething troubles with the gearbox.

"One of the things with the DeltaWing is that all of the damping of the sprung mass in roll has to occur at the rear. The front can contribute virtually nothing.

"Seeing this and simulating it, we had to find a way of increasing the roll damping at the rear without overdamping it in heave [equal vertical motion of the front and rear together]. We came up with a very simple overdriven damper beam, so that the heave is on the same motion ratio but when the pullrods are in roll it overdrives the dampers.

"That also contributes roll stiffness for the springs at a greater rate than in heave. Together with an anti-roll bar the result is that we control the car's roll characteristics much more tightly than if we had the same motion ratio in heave as in roll. We didn't end up running a third spring for heave or anything like that.

"The aero package is incredibly benign. It doesn't have what you'd call the pitch sensitivity of a traditional flat-bottom car. It has one puddle of downforce under the centre of gravity, there's nothing happening at the front or the back. For us, having heave motion at the rear of the car was no drama. We have a comfortable position."

The ACO laid out a target lap time of 3m45s for the DeltaWing. Satoshi Motoyama set a fastest time of 3m47s on the test day at the beginning of June, without the benefit of special tyres or draining the car of fuel. In qualifying on Wednesday night Michael Krumm beat the target before riding a kerb too enthusiastically.

"I'm very glad that the car is doing what we said it could do. On Wednesday night, on only our second lap, we did a 3m42s, and on the next lap when Michael had the kill switch go, it would have been a 3m39s. That would have been at the head of the LMP2 field. We'll show that we can do 12 laps on 40 litres of fuel and our tyres will go more than five stints.

"So far we've used the same set of tyres that did 729km on the test day, and we've started putting miles on the softer tyre we'll be using at night."

New life for an old tub

The Aston Martin AMR One had a disastrous debut at Le Mans last year and was dropped by Prodrive, but the two chassis that retired from the 2011 24 Hours early on have found new lives: one has returned as the underpinnings of the new Pescarolo, while the other donated its tub to the DeltaWing. As a result, the DeltaWing did not require a crash test.

"It didn't take much adaptation to the concept. It dropped in and it was easy. The shape of the underside completely knackered the aerodynamics for a little bit until we reworked the area ratios around the tunnels so that everything was doing what it was meant to do.

"The ACO had asked if it was possible to use a modern LMP1 tub because it would remove any concern about whether it was safe. Frankly, we were glad to do that. By that stage we would have had no time to design a new tub and put it through crash testing."

Scepticism about the project meant little investment, with the result that many of the ideas on the DeltaWing are relatively undeveloped because Bowlby did not have the manpower to explore them thoroughly. It even has a vestigial DRS [Drag Reduction System], in effect a couple of small moveable flaps

"We have a super-basic DRS. You've got to remember that at the outset of the project we had four guys working on the car - three designing and me running around co-ordinating. We drew it and built it in seven months with not a single part that was on the shelf.

"If you're an auto industry player you're looking for ways to market around the future - downsized engines, simplification, lighter materials and so on. But to actually get people to spend money on a programme like this when there was no evidence of it working - it was a question of faith - was tough. It took a lot of time for the design staff to get an remuneration because there wasn't any money floating around for a long time. They took a big risk in making such a commitment.

"Dan Gurney had the vision to get involved and put in a lot of energy. He said, 'If we don't start now it's never going to happen.'"

Cutting the weight in half

"Half the weight, half the power" was Bowlby's pitch for the DeltaWing. Hitting the ambitious weight target of 500kg - LMP1s have a minimum weight of 900kg - would prove a challenge because the DeltaWing's overall performance would not rely on mass alone.

"Given 300 horsepower, we had to get the drag down so that we could do 200mph down the Mulsanne. Then we had to get the weight down so we had the power-to-weight ratio. And then we didn't need the downforce or the tyre capacity, so they could shrink. The result is that we didn't need exotic materials. Our wishbones are steel, welded and fabricated like anything else. There's hardly any titanium in the car.

"The engine was obviously going to be the fundamental thing and the Nissan engine is light enough. The next biggest item was the gearbox. We needed it to be 33kg. That was a massive undertaking and it was successfully achieved, but we had to design it ourselves.

"Getting the brakes light enough and appropriate for the capacity and balance we were going to use was a big deal, and of course the supplier took a bit of convincing but they rose to the challenge. They've made us a spectacular brake package. The front is tiny but the rear is beefier because 60 per cent of the braking comes from the rear.

"When we first put it on track it was about 465 kilos. And then with lights, mirrors, cameras and everything else it went up.

Does the DeltaWing have a future?

Apart from an invitation to the Petit Le Mans later this year, the DeltaWing's future beyond the 2012 Le Mans 24 Hours is uncertain. Another project has been accorded Garage 56 status next year, which means that even if the DeltaWing continues to exceed all expectations at may never run again in anger. As an entry running outside the rules it exists only on the sufferance of other competitors.

"It would be tragic if this was the car's only race but I don't think this is the endgame. It's a stepping stone. It's worked for Nissan and Michelin and I'm sure they'll want to go further with it. Right now everyone's waiting to see what happens at Le Mans this weekend and I don't think anyone can predict what the outcome is going to be." 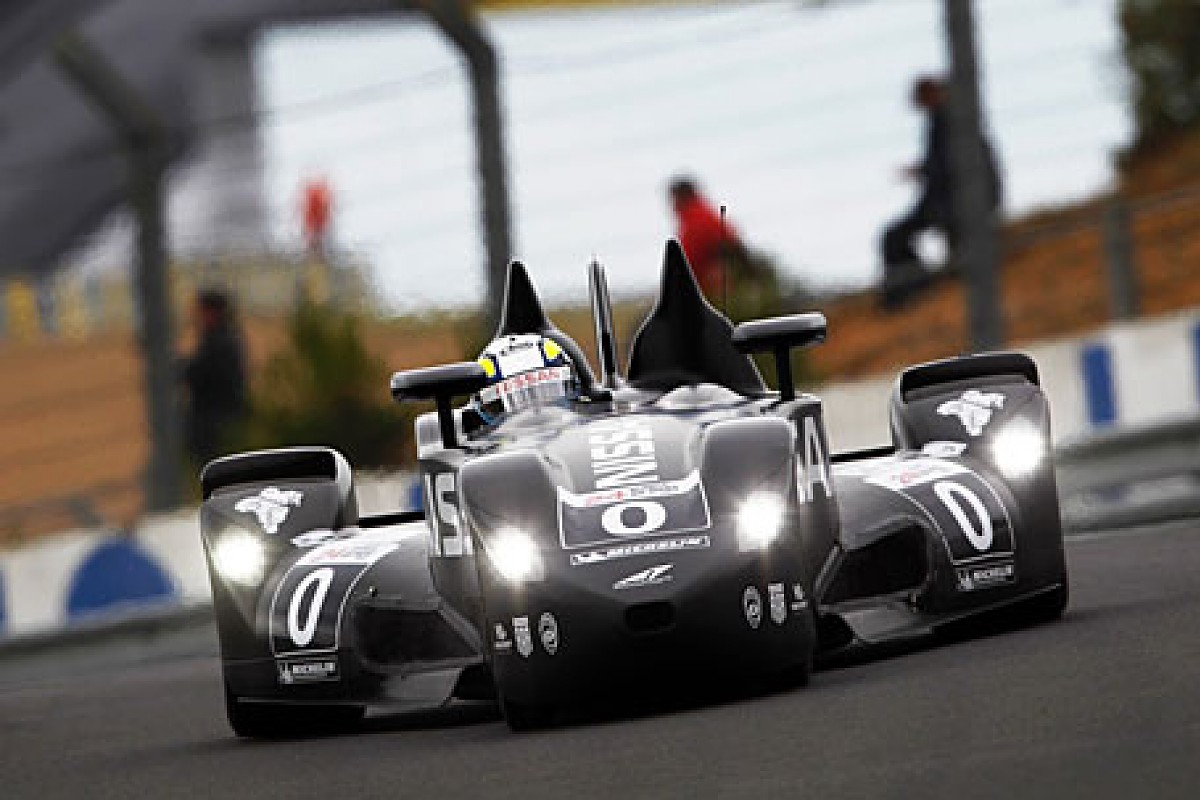