Chadwick had led the race from pole, ahead of Powell and Assen winner Emma Kimilainen, as Porsche Carrera Cup GB racer Esmee Hawkey stalled on the grid from the third spot.

Visser, who trailed Chadwick by 13 points ahead of the race, had started the race in fifth - and though she managed to overtake Fabienne Wohlwend in the opening stages - started to slip away from the leading trio of Chadwick, Powell and Kimilainen.

Powell put the pressure on Chadwick as the final race of the W Series season approached its midway distance, with the Williams Formula 1 development driver forced to defend over a series of laps.

That allowed Kimilainen to close the gap also, with both Powell and Kimilainen ultimately overtaking Chadwick at once through Paddock Hill Bend.

Powell and Kimilainen then began to extend a lead of almost nine seconds ahead of Chadwick, as Visser began to inch closer to her title rival.

Miki Koyama suffered a spin at the entry to Sheene Curve, with the car stranded in the middle of the circuit and requiring a safety car in order to recover it.

That safety car closed the gap between the leaders, but crucially allowed Visser to overtake Chadwick for the final podium position - again at Sheene Curve - upon the restart.

But Chadwick's strong season, with two wins to Visser's one, means that Chadwick nonetheless claims the first ever W Series crown, taking a $500,000 share of the overall prize fund. 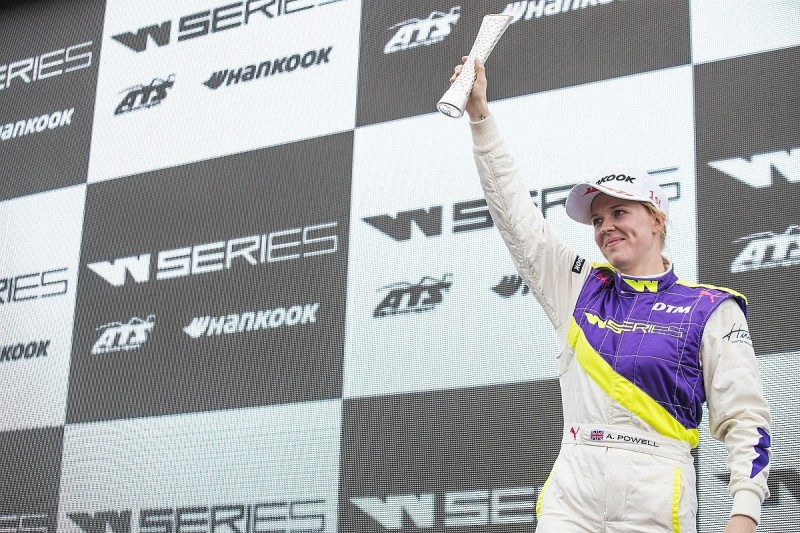 Powell's first win elevates her to third in the championship, while Kimilainen's silver finish also moves her ahead of Wohlwend in the final standings to fifth.

Wohlwend ended the race in fifth on the road behind Chadwick, ahead of Vicky Piria, who had a strong race, climbing from tenth on the grid, to cement her place on the W Series grid for 2020 and move to ninth place in the championship.

Jessica Hawkins ended the final race of the year in seventh place, which ensures her safety as she jumps from 14th to 11th in the standings.

Also safely through to next season was Tasmin Pepper and Sabre Cook, while Gosia Rdest, Caitlin Wood, Hawkey and Vivien Keszthelyi all miss out and will need to re-enter the selection process.

Marta Garcia ended the race in eighth after overtaking Cook at Graham Hill Bend on the restart, while Sarah Moore completed the top 10.