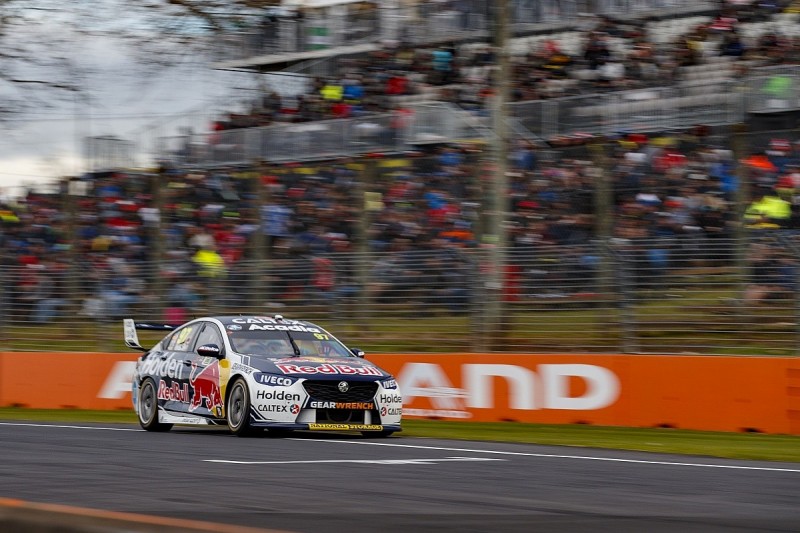 The Triple Eight pair took their first one-two finish since last year's Sandown 500, the result underpinned by a flawless performance by van Gisbergen.

However contact on lap two of 70 between Whincup and Nick Percat meant that Whincup was handed a 15-second penalty after the race, demoting him to sixth overall.

Van Gisbergen initially had to defend from fellow front-row starter Cam Waters, with the Tickford Ford glued to the back of the Red Bull Holden for the first few laps.

The sting quickly came out of Waters' challenge, however, with van Gisbergen able to build a 2.1s lead before the safety car was called to recover an out-of-fuel Mark Winterbottom on lap 14.

Everyone who had pitted hit the pitlane immediately, with the advantage swinging to the likes of Fabian Coulthard, Anton De Pasquale, and Whincup who had made early stops.

By lap 24 the Red Bull Holden was in the lead, Whincup pouncing on a mistake by Coulthard at Turn 4.

Whincup did his best to sprint once in front, hoping to make up for a fuel deficit to teammate van Gisbergen from the first round of stops.

The seven-time champ managed to get 10s clear of van Gisbergen before making his second, much lengthier fuel stop on lap 37 - including a tyre-torching lock-up at the control line coming into the lane.

At the very same time the battle for effective third place between Waters and team-mate Chaz Mostert turned nasty.

After running side-by-side down the back straight, Waters nipped a front-right wheel on his way into the chicane and clattered into Mostert.

The Supercheap-backed Mustang was left with damaged suspension, which would require a stint in the garage that left him 13 laps down.

To add salt to the wound he would later be slapped with a drive-through penalty for speeding in the pitlane.

Van Gisbergen, meanwhile, steadily pulled away from Whincup as the second stint wore on. His lead did get to as much as 4s, before coming back to 2.3s in the closing laps.

"I was a bit worried there in the middle, and at the start when we had all those Fords [pushing us]," said the race winner.

"But all the support here just makes you lift. You come here and it's just an awesome feeling to have so many Kiwi fans."

Whincup, meanwhile, said there was little he could have done differently during the Percat clash.

"I'll go and speak to him straight away, but there wasn't much I could do," he said.

"I was bottled up, stopped in the middle of the corner and he came back down a lot harder than I expected."

Will Davison finished third on the road but a 15s penalty for pitlane speeding dumped him down to ninth.

That was good news for Waters, who inherited the final spot on the podium from his Tickford team-mate and ultimately moved up to second owing to Whincup's penalty.

David Reynolds became third, while Scott McLaughlin was fourth, 16s behind the winner.

The Penske Ford driver still holds a formidable 577-point lead in the title race, with van Gisbergen jumping up to second in the standings.

Mostert, meanwhile, was dropped to fourth and now faces a 651-point gap to McLaughlin.