Shane van Gisbergen triumphed over Anton De Pasquale in a bizarre finish to the Supercars Townsville 500.

The pair battled across the second 250-kilometre heat, a fight that the boiled over on the very last corner.

With van Gisbergen holding a narrow lead over De Pasquale, the Shell Mustang driver tried an ambitious passing attempt down the inside.

However he didn't close enough, instead tipping the leading Red Bull Holden into a spin.

De Pasquale then slowed to try and redress the situation before the line, however van Gisbergen purposely followed the Shell Ford across the line to force stewards into giving De Pasquale a penalty.

In the end, though, it was only a five-second penalty, which meant they still finished first and second.

It was De Pasquale that got the jump at the start, the Dick Johnson Racing driver easily able to out-drag polesitter Cam Waters through Turn 1 and into Turn 2.

Moments later there was drama right behind the leaders, Scott Pye squeezing Will Davison into the wall on the exit of Turn 3.

Pye spun as part of the contact and was out of the race on the spot while Davison picked up damage and went straight on at Turn 4.

He did get back to the pits for repairs and back into the race, however his hopes of a podium were dashed. The clash sparked a brief caution period, the race going green again on lap 4.

Initially it was De Pasquale that continued to lead, however within four laps he was overhauled by the only super softs-shod car in the field, that of Thomas Randle.

As Randle charged into a healthy lead, van Gisbergen started to make moves on his fellow hards-shod cars. On lap 10 he passed Waters for third on the road before closing right up on De Pasquale.

The Kiwi then stayed tucked under De Pasquale's rear wing until taking his first stop on lap 28. 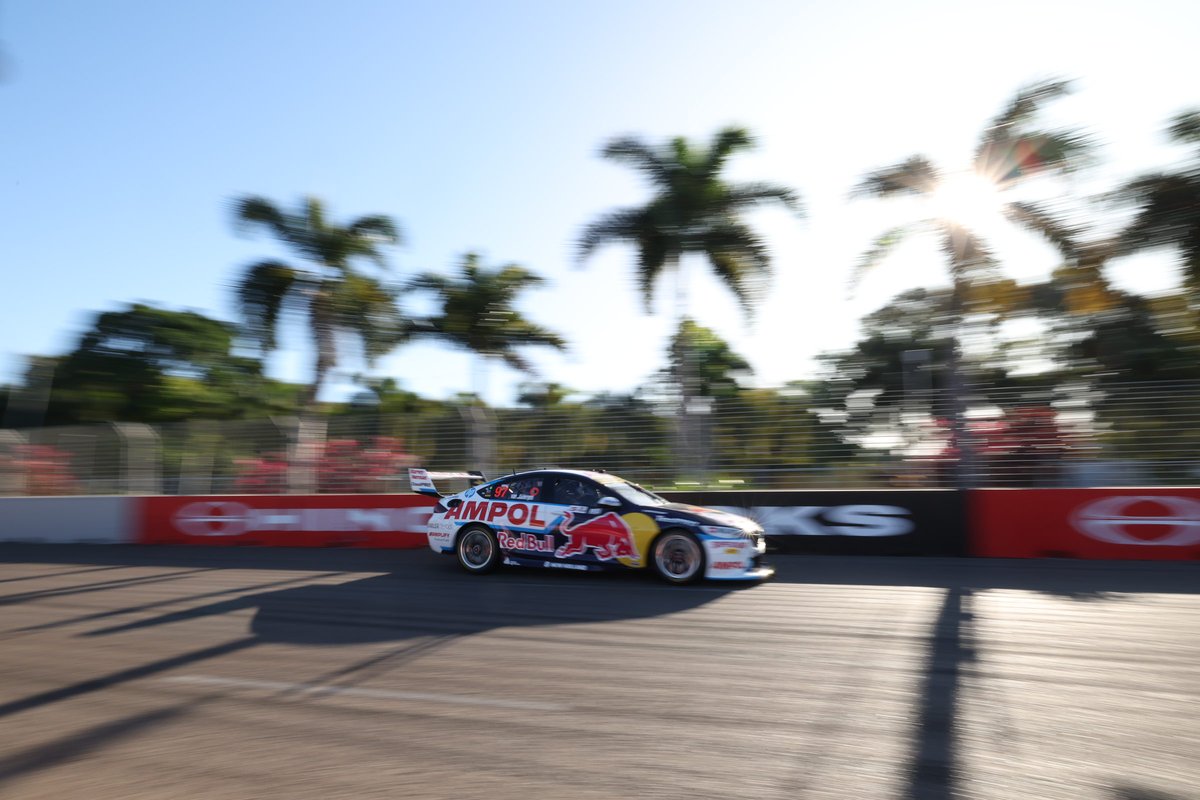 De Pasquale then responded a lap later to try and cover van Gisbergen, but while the DJR Mustang did emerge first it was only temporary, van Gisbergen able to wrangle the lead after several corners side by side.

Randle pitted a lap later again to go from the super softs to the hards and initially slotted in between van Gisbergen and De Pasquale. But De Pasquale forced his way into second, the pair making light contact in the process.

The second stint was advantage van Gisbergen, who cruised out to an almost five-second lead over De Pasquale.

The pair then pitted together for their super softs on lap 61, the gap reducing to arounds three seconds as they resumed in order.

In classic van Gisbergen style he only went as fast as needed across the third stint, allowing De Pasquale to close the gap as he managed his rubber.

However in the closing laps it became clear De Pasquale did have a car speed advantage, which led to the awkward last corner exchange.

Adding to the spice was van Gisbergen ignoring De Pasquale as they he seemingly tried to apologise immediately after the race.

"He had a go," said van Gisbergen. "You have to respect that. Two in a row is awesome thanks so much to the beam. The car was good but his was better, he ran me down.

"We'll have a chat later. I'm angry at the moment."

De Pasquale added: "I was catching him, had a dip, locked the front and spun him around. I was trying to give him back the position but he was trying to be a bit smarter than that.

"Play on, all good. We finished where we deserved to finish."

The gap between van Gisbergen and De Pasquale is now 274 points.

The battle for third came down to Waters and Chaz Mostert in the third stint. Mostert made a fast start to the run home on super softs, barging past Waters to grab the final spot on the podium with 21 laps to go.

Waters, however, played the long game on the soft rubber and was able to run down Mostert and seal third place with five laps to go.

James Courtney also got past Mostert to finish fourth with Broc Feeney in sixth behind the WAU Holden.

Davison completed an impressive comeback to seventh ahead of Tim Slade, Andre Heimgartner and Mark Winterbottom.