Andre Heimgartner took a career-first Supercars race victory at The Bend despite being served a five-second penalty for an unsafe release, as Kelly Grove Racing ended a three-year win drought.

The race got off to a wild start in damp conditions, with three different leaders on the opening lap. The first was Chaz Mostert, who got the best of the start from the outside of the front row.

Behind him Heimgartner and Anton De Pasquale bashed doors as they squabbled over second place, the latter winning out after running side-by-side through the first couple of corners.

Mostert then ran wide which allowed De Pasquale to grab the lead, only for the Dick Johnson Racing driver to run wide himself at the very next corner. That opened the door for Heimgartner to slide into the lead.

Once in front, there was no stopping the Mustang driver who pulled a 7s lead in a dominant first stint. But KGR very nearly threw the win away with a costly mistake during Heimgartner's lap 7 stop when he was released straight into the side of Jamie Whincup, resulting in a five-second penalty.

He had the pace to build the gap, but spent the rest of the race at risk of a late Safety Car costing him dearly. But luckily for the 25-year-old, the race ran green to the end, Heimgartner the KGR team's first Supercars win since Rick Kelly's Winton 2018 triumph by 3.9s once the penalty was applied.

"[The team] never told me [about the penalty], I knew," said Heimgartner.

"When we had contact I was like, 'Oh geez that just made it a lot harder for myself' and I knew I had to get five seconds. On the last lap it was 4.5 seconds so I just knew, but they didn’t tell me. 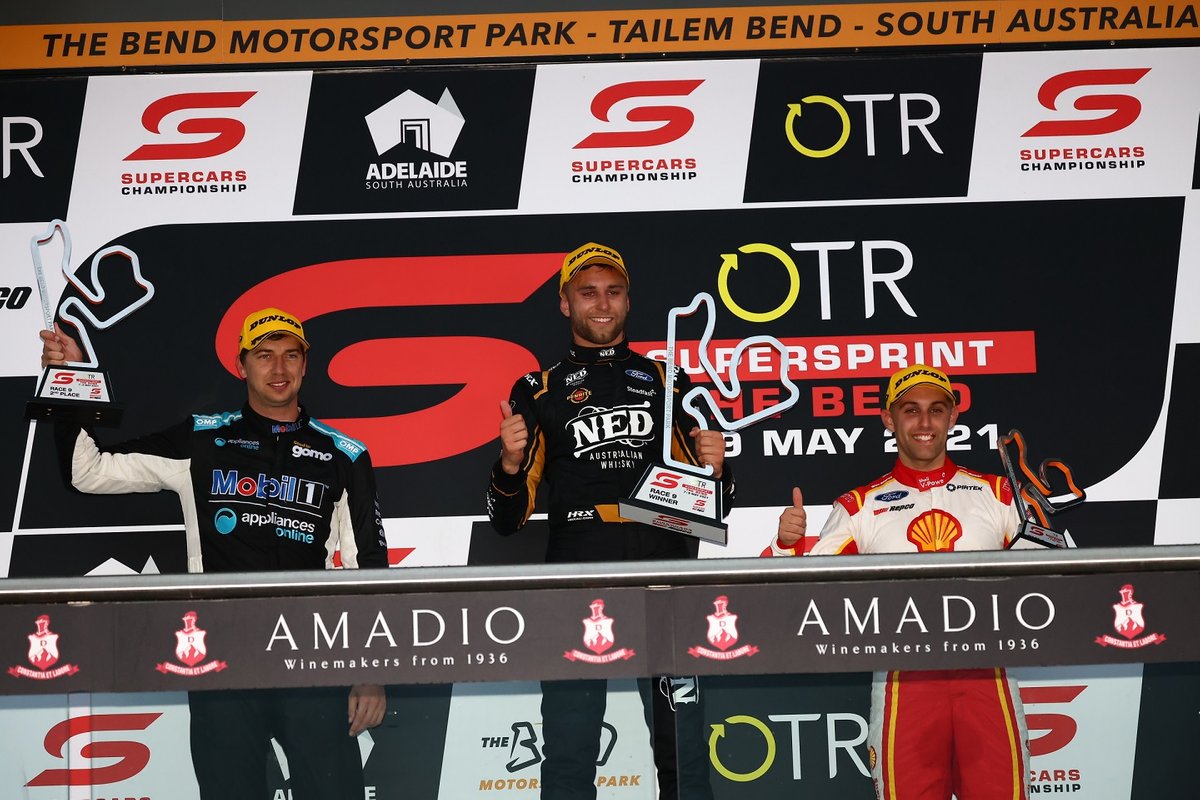 "I’m just over the moon that I was able to get that five seconds and get the win.

“I’m just relieved. It’s been a long time, I was in and out of the category. Thankfully Todd [Kelly] gave me the chance to come back into the category and race for his team and it’s been really good so far."

BJR driver Percat was a surprise contender in the race, having started dead last after the team's horror showing in qualifying. But the team then opted to start three of its cars - including Percat - on slicks, which paid off beautifully. The slick quickly became the tyre to be on, Percat able to run long – until four laps from home – as he moved his way up the field.

He re-joined fourth after making his stop and was in the fight for the podium, only to make a small mistake on the last lap. That meant he had to settle for fifth.

Triple Eight had a tough day by its standards, headlined by jammed air spike hose during Shane van Gisbergen's stop. The Kiwi then made good headway, only to take an off-track excursion with a few laps to go.

The points leader ended up seventh, one place behind team-mate Whincup.