Anton De Pasquale won the final race at Sydney Motorsport Park despite a tyre scare that forced him into an early stop.

The polesitter seemed to be cruising early in the first stint, building a 3.5-second gap over fellow front row starter Will Brown across the first five laps.

However a delaminating right rear tyre forced De Pasquale into an early stop, his lap 11 service coming some five laps sooner than expected.

That initially gave the Dick Johnson Racing Mustang a healthy lead, close to 10 seconds, thanks to the undercut – but left Erebus Holden driver Brown with tyres that were six laps younger for the run home.

The better rubber helped Brown quickly reel De Pasquale in, the rookie slotting under the leader's rear wing with a handful of laps to go.

But some clever tyre management during the chase meant De Pasquale had some pace in hand when Brown got behind him, enough, as it turned out, to keep him at bay.

"Will was pushing me quite hard," said De Pasquale.

"I had a bit of tyre in hand so I pushed quite hard in the first [stint] and one of the tyres delaminated or something. I had to pit quite early and then do a long stint, which we didn't want to do.

"I knew Will was coming [in the second stint], so I saved a little bit of tyre for the battle. I knew it was going to happen. Once he got to me, I think he was pushing pretty hard so I don't think he had much [tyre] left."

Brown confirmed that he wore his tyres out during the chase.

"Typical young bloke, burned [the tyres] up," he joked. "I don't know if I was burnt out or the car was at the end there.

"I put a bit of pressure on [De Pasquale] out of the last corner and gave him a few taps, but once I was behind him it was too hot. I would have liked to get that win, but it's cool to be on the podium." 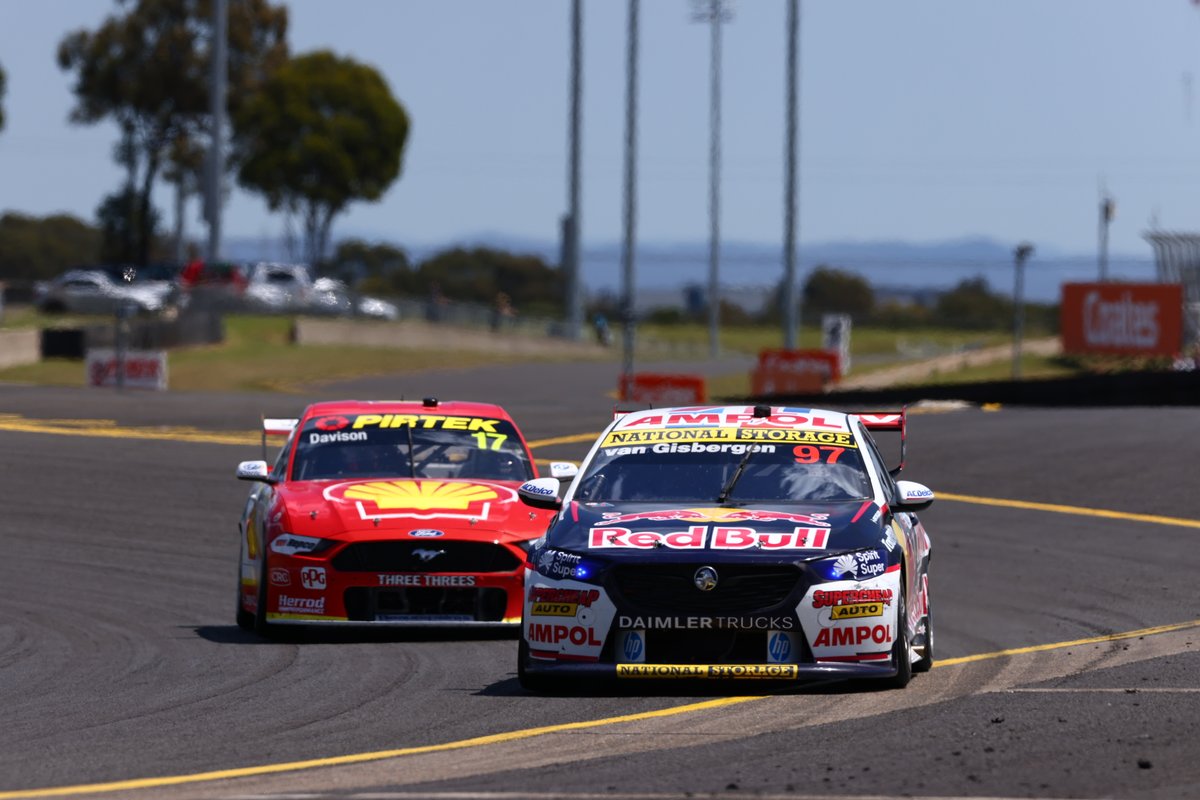 Whincup led the way in the first stint but had mirrors full of van Gisbergen, a least until the Kiwi went for an early stop on lap 11.

The undercut helped the points leader get ahead of Whincup, but the seven-time champion had better tyres and was able to get back through on lap 25.

Will Davison finished fifth ahead of a much-improved Cam Waters, who took Tickford's best result of a tough weekend with sixth.

Chaz Mostert and Jack Le Brocq were next in line followed by Tim Slade and Mark Winterbottom.

Davison was given a free kick at the start of the race when polesitting team-mate De Pasquale bogged down at the start.

As De Pasquale dropped back to seventh, Davison was able to sweep into the lead, swiftly building a 2.5-second gap over a fast-starting van Gisbergen, who went from sixth to second on the opening lap.

That gapped was mostly stable across the first stint, Davison well-placed to take his first win since re-joining DJR.

However his good work was undone by an electrical gremlin that reared its head early in the stint, Davison left flying blind by a non-functioning dash.

The issue meant Davison had no speed indicator, gear indicator or speed limiter when he came in to make his lap 15 stop, a subsequently slow approach to his pit box allowing van Gisbergen to close the gap in the lane.

Van Gisbergen now leads the series by 338 points over Whincup.

The Supercars season continues with the second of four consecutive events at Sydney Motorsport Park next weekend.