Having just one Supercars endurance event is unfair on young drivers and a huge advantage for the established co-drivers, according to Shane van Gisbergen's regular partner, 2007 champion Garth Tander.

The 45-year-old unloaded on the current enduro schedule, which features just one two-driver, long-distance race – the Bathurst 1000.

During the modern Supercars era there has mostly been three events that made up the Season of Endurance.

They were a 500-kilometre race, traditionally at Sandown, in the lead-up to Bathurst, the Bathurst 1000, and then the Gold Coast street race.

However during the COVID era that was scaled back to cut costs, with the Bathurst 1000 the only race to survive the enduro cull.

That has significantly cut down the amount of laps co-drivers get during the year, with running now limited to team test days (of which only three are allowed), sponsor ride days, a half-hour practice session at the Sandown SuperSprint, and then the official practice sessions for the Bathurst 1000.

That has put a premium on experience when it comes to co-driver choice.

According to Tander, the lack of running has widened the gap between the experienced and inexperienced co-drivers in the field.

The four-time Bathurst 1000 winner reckons not having a 500-kilometre event in the lead-up to the Great Race is "incredibly unfair" on young drivers and a "massive advantage" for the teams that can sign established talent. 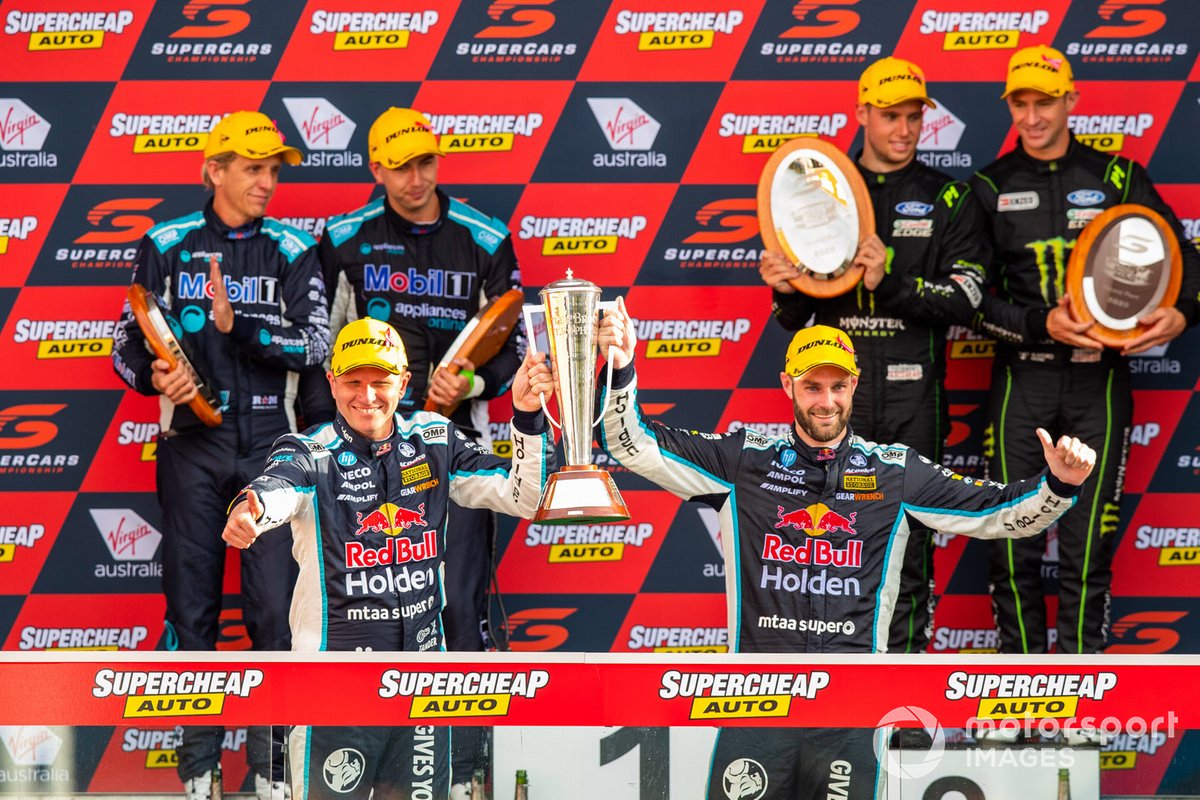 Tander claimed his fourth Bathurst win in 2020, and believes younger drivers who don't get seat time before the 1000 will lose out

He made that point during the post-practice media conference at Sandown, where he, Jamie Whincup and Fabian Coulthard were the fastest of the co-drivers.

Tander and Whincup will both drive for Triple Eight at the Bathurst 1000 partnering van Gisbergen and Broc Feeney respectively.

"I feel sorry for the other co-drivers that don't have the experience of the three of us sitting up here," he said. "Having a 500km race prior to Bathurst is important.

"Us three sat up here and spoke about how we contributed to developing the race car today. We didn't spend any time getting comfortable in the race car, we just got on with driving it. I was trying to make their race cars faster for this weekend.

"So that's a massive advantage that we have over the inexperienced co-drivers. I think giving those co-drivers that are racing in the Dunlop Series, the Cam Hills or Declan Frasers or Tyler Everinghams, the chance to do a 500km race before Bathurst... I really think it should come back, because it's incredibly unfair.

"We have a massive advantage going to Bathurst given our experience."

There has been talk about restoring additional endurance races and it is thought that it is something the series is in favour of.

However, there appears to be ongoing resistance from teams given the additional costs of running cars in the long-distance events.