For the second race running it was a dramatic first lap, James Courtney the unlucky driver to end up in the wall this time around.

The veteran found himself sandwiched between Jake Kostecki and Todd Hazelwood on the way into Turn 1 and was fired into the outside wall at speed.

That prompted a lengthy safety car as the ruined Mustang was retrieved and repairs made to the barriers.

Van Gisbergen, meanwhile got past David Reynolds for seventh, but didn't make much headway after that until the stops.

Feeney made his stop on lap 18, followed by De Pasquale and Heimgartner on the next lap.

Heimgartner managed to jump both of those drivers in the process as he took over the effective third position.

On lap 21 Waters took his service which prompted Davison to cover from the lead a lap later.

That was when Davison's race, and his shot at the Jason Richards Trophy, unravelled, his car released without its left-rear properly attached.

That left Waters in the lead, while van Gisbergen, who stopped on lap 25, emerged as a contender as he jumped Feeney in the stops and set after Heimgartner.

He passed his fellow Kiwi at the chicane on lap 31 before hunting down Waters.

The pair then staged a thrilling battle for the lead as van Gisbergen consistently tried to pass Waters at the hairpin, and Waters defended staunchly through the fast complex onto the main straight.

The battle turned physical on lap 35 when van Gisbergen got into the back right rear quarter of Waters through Turn 11.

Three laps later, and three laps from the end, the hometown hero finally got the jump done, sliding up the inside of Waters at Turn 11 to seal victory in the final ever Supercars race at Pukekohe.

The win also sealed the Jason Richards Trophy for van Gisbergen in what was a fitting end to the Pukekohe era.

Van Gisbergen will now head to the Bathurst 1000 with a 525-point series lead over Waters.

Waters finished second while Heimgartner made it two Kiwis on the podium with third place.

Reynolds finished eighth from Nick Percat and Tim Slade, while Davison was left down in 22nd after making a second stop to have his wheel issue rectified, and copping a 15-second penalty for an unsafe release. 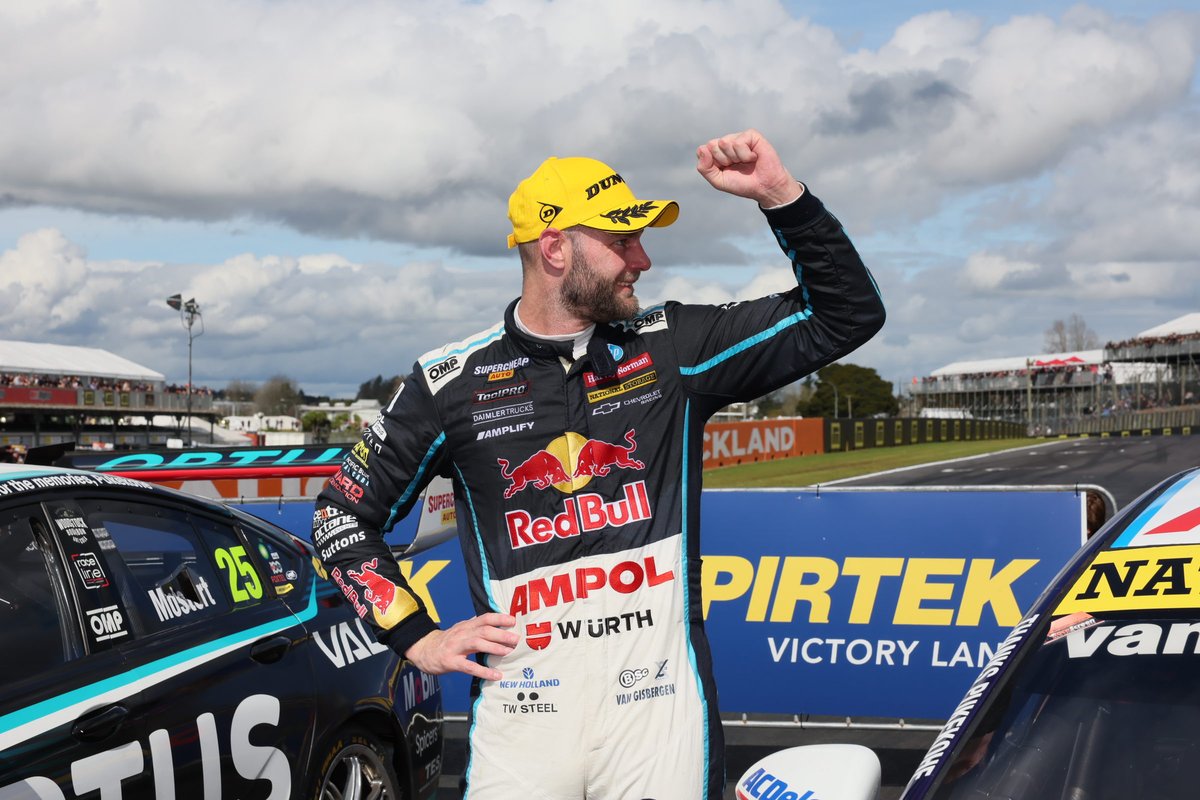 Shane van Gisbergen won the Sunday Supercars opener at Pukekohe that was rocked by a frightening first-lap crash for Will Brown.

The race got off to a dramatic start after second-row starter Anton De Pasquale was shuffled to the back end of the top 10 in the first few corners.

He then made contact with Brodie Kostecki on the exit of Turn 6 which fired the Shell Ford into the wall.

However there was an even bigger impact at Turn 10 when Will Brown clashed with Mark Winterbottom and hit the wall hard.

The race was red-flagged due to the a concrete wall near pit entry being shifted by the crash, while medical crews had to work on a winded Brown trackside before he was transferred to the medical centre.

Supercars later confirmed that Brown wasn't seriously injured while Winterbottom was hit with a pitlane penalty for his role in the incident.

The race got back underway on the sixth lap with van Gisbergen initially leading Will Davison.

However a failed attempt to wrangle the lead from van Gisbergen on the outside at Turn 8 on the restart lap proved costly for Davison, who was run wide and dropped back to fourth behind Chaz Mostert and Cam Waters.

Van Gisbergen continued to lead by around a second until the lead group started their stops when Waters pitted on lap 16.

Mostert and Davison followed suit a lap later before van Gisbergen covered them all off the next time round, the top four resuming in the same order.

They stayed that way until the time certain finish too, van Gisbergen ensuring the Pukekohe farewell will feature at least one Kiwi victory as he crossed the line 2.3s clear of Mostert.

Jake Kostecki put in a solid effort to finish ninth ahead of James Golding.