The touring car series competed for championship points for the first time in Australian GP history, with four different winners across the four points-paying races.

There were a number of significant firsts as well, led by Pye taking a stunning win from Saturday's evening 25-lap twilight race - the first Supercars victory for the Walkinshaw Andretti United squad of which IndyCar legend Michael Andretti and McLaren Formula 1 team boss Zak Brown are co-owners.

Earlier in the weekend, it was Scott McLaughlin that made history by claiming the first ever championship Supercars race win at an F1 Australian GP.

The Penske Ford driver staged an epic twilight battle with Jamie Whincup in the opening 25-lap pitstop race, both drivers enjoying stints in the lead before McLaughlin barged his way in front with a three-corner side-by-side move at two-thirds distance.

Fabian Coulthard and Shane van Gisbergen made it a Penske Ford/Red Bull Holden lockout with third and fourth. 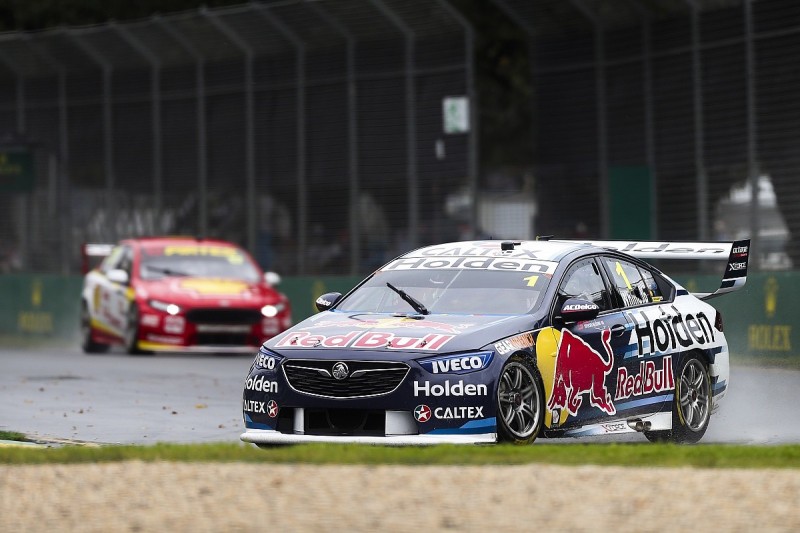 Whincup struck back in the second race of the weekend, dominating Saturday's 13-lap sprint race.

The reigning champion was unstoppable in wet conditions, leading McLaughlin home by 4.2 seconds despite two separate trips across the grass at Turn 1.

While there was no repeat of Friday's battle for the lead, there was a couple of decent scraps behind the top two. Van Gisbergen pulled a brilliant last-lap move on Cam Waters to grab third, a lap after Chaz Mostert had muscled his way past Nick Percat for fifth.

The wet weather returned for the second 25-lap race on Saturday evening, but in much more dramatic style. After the first two-thirds of the race had been run in the dry, a late storm made for a hectic finish.

It almost cost Pye a fairytale first Supercars win as well, the Walkinshaw Andretti United driver having run away with the race before the rain arrived.

It meant he had to survive the last nine laps struggling with slick tyres in wet conditions, a half-spin with two laps to go allowing Whincup to close right in for a grandstand finish.

In the end Pye hung on to win by 0.2s after a drag race to the flag, the race practically ending in the dark. 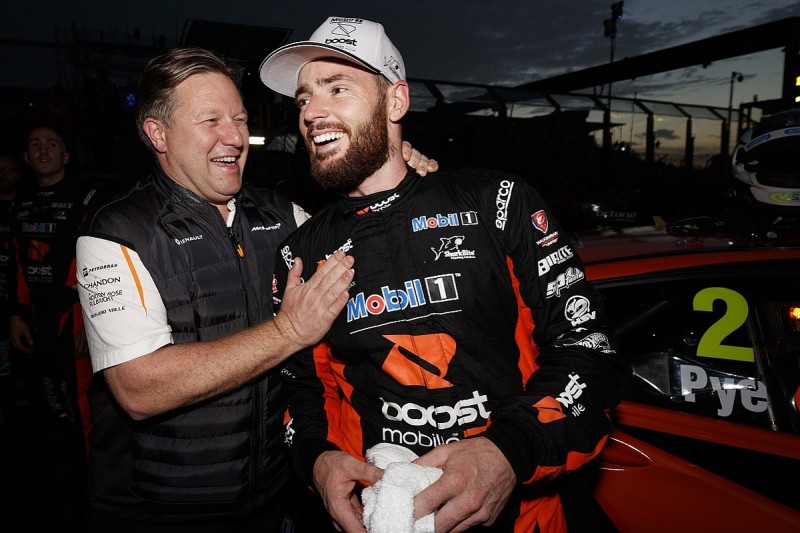 Polesitter McLaughlin endured a race to forget, having initially handed the lead to Pye by running off at Turn 1 on lap two, before throwing away a certain top six finish by opting to pit for wets when the rain arrived.

That dumped him down in the field, the track not getting wet enough to allow him to climb any higher than 15th.

Sunday's finale was a significantly less spectacular affair, Reynolds making the most of polesitter Whincup's sluggish getaway to jump into a lead he wouldn't relinquish.

A 13th from the back of the grid on Sunday means van Gisbergen retains the points lead by 49 over Reynolds, with McLaughlin in third.

Whincup, still recovering from his tough season opener in Adelaide, is sixth, 107 points off his team-mate.