Since withdrawing from Supercars as a works entrant at the end of 2015, Ford's involvement has been based on licensing agreements with Tickford Racing and DJR Team Penske rather than genuine funding.

That will change next season, with Ford Australia tying the introduction of the Ford Performance brand to its local arm with a renewed investment in Supercars.

Ford's involvement will be underpinned by a technical alliance with Tickford Racing and DJR Team Penske to develop a new two-door Mustang Supercar (illustration courtesy of motorsport.com).

The current Ford teams have been evaluating the Mustang as a replacement to the FG-X since 2016 and the new Ford deal clears the funding and IP permissions hurdles.

It will be the first two-door model to make use of the Gen2 regulations and be powered by the five-litre V8 engine.

The car will developed as a joint venture between both of the current Ford outfits, which opens the door for DJRTP's aerodynamics guru and star race engineer Ludo Lacroix to have an influence on its development.

The now four-year-old Ford FG-X has struggled to match the pace of the brand new ZB Commodore this season. 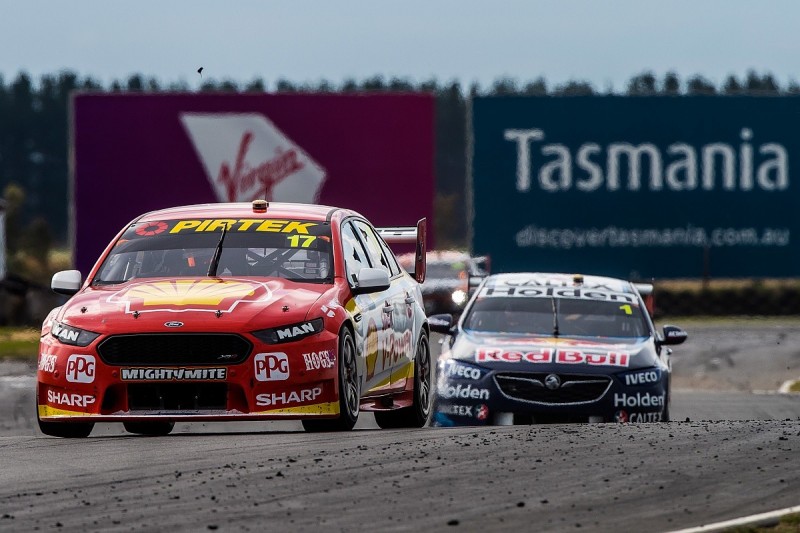 Back in 2016, the Ford teams began heavily investigating the Mustang as a possible replacement to the FG-X and targeting an '18 switch.

Pressure was put on Ford to help fund a new model, with hopes Roger Penske could use his contacts in the US to get Ford Performance backing but Ford's global arm remaining unmoved.

Penske has since flirted with the idea of bringing a new manufacturer into Supercars or even moving to Ford's arch-rival Holden, but Tuesday's announcement commits the DJRTP squad to Ford for the foreseeable future.

Ford has not put a timeframe on its new commitment to Supercars.

Its factory return was greeted with a cheeky response from Holden Australia's executive director of marketing Kristian Aquilina.

"It's a legendary rivalry on the racetrack, so bring it on," he said.

"The all-new Commodore has won seven of the eight Supercars races this year and Ford's re-entry is only going to push our teams even harder and make our racecars stronger as we look to take plenty more silverware from our rivals.

"We look forward to relegating the new Mustang to the back of the racetrack!"