The Triple Eight crew were heavily involved in battling the pitlane blaze, having been closest to the scene of Percat's burning Brad Jones Racing Holden.

Led by Dutton, the team swiftly doused the Commodore with fire retardant before it could turn from a superficial external fuel fire to something more sinister.

Dutton, however, admits he almost missed the drama unfolding with the fire at the pitbox nearby, having initially planned on running down to pitexit to help douse Percat's car.

It took a tip from DJR Team Penske team manager Ben Croke to alert him to the more immediate threat of the fire near the garage closer to him.

"It was so exciting and fun because nobody got hurt and the car didn't burn to the ground," said Dutton.

"Jordan, one of our pit crew, he was first on the spot.

"I was actually really excited to run down to the other end of the pitlane, if they needed a hand. That's where I was looking.

"[It was] Ben Croke from next door at DJR Penske who pointed down the pitlane [to pit exit]. 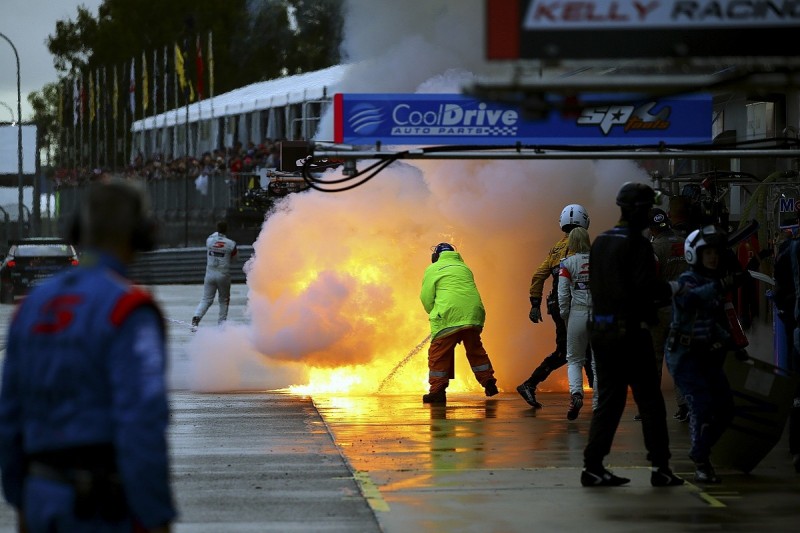 "I didn't even know the car was there because I was excited about heading down that way.

"So of course you run over and do what you can.

"You get to pull the [extinguisher] pin while you're running."

Dutton added that the way other teams pitched in to help BJR contain both the fuel spill fire and the car fire proves that the camaraderie in the paddock is strong.

"There's no team hats at that stage," he said.

"It's all everyone's welfare, and everyone would do it for each other."

Dutton's firefighting antics came as no surprise to race winner Shane van Gisbergen, who joked at how trigger happy with the extinguishers Dutton was during the star driver's recent demolition derby-style 30th birthday celebrations in New Zealand.

"Every car that lit fire, Dutto was there [like] Superman with his fire extinguisher," quipped the Kiwi.