Chaz Mostert took his second victory of the season in a dramatic opening Supercars sprint race at Hidden Valley after leader Shane van Gisbergen was delayed by a slow pitstop.

The race got off to a chaotic start, as poleman Anton De Pasquale was outfoxed by Shane van Gisbergen into Turn 1, the Triple Eight Holden driver drifting right before pulling a surprise move down the inside.

De Pasquale's Dick Johnson Racing Mustang was then tapped into a spin by Scott Pye, who bounced over the inside kerb, before being hit again by a slow-starting Mark Winterbottom.

There was another few hits coming too, Todd Hazelwood, Jack Smith, Fabian Coulthard and Garry Jacobson all crunching into the poleman's stricken car, with Pye earning a drive-through penalty for his trouble.

The clean-up soaked up the first six laps of the race, the race going green again on lap seven with van Gisbergen leading Nick Percat and Mostert.

They ran in that order until lap 10, when Mostert slid up the inside of Percat into Turn 1. The Walkinshaw Andretti United driver then settled into second, a little over two seconds behind the leader.

At that point it looked like van Gisbergen's race to lose, until he came in for his lap 22 stop. A stubborn right-rear wheel nut meant the service took 30 seconds, the Kiwi re-joining the race way down in 20th.

That left Mostert with a commanding lead, his final margin 12.3s over Cam Waters - who barged his way past Percat during the second stint.

"Starting eighth I was just thinking I hope I get through Turn 1," said Mostert. "Then I lucked in to coming out of Turn 1 in third. 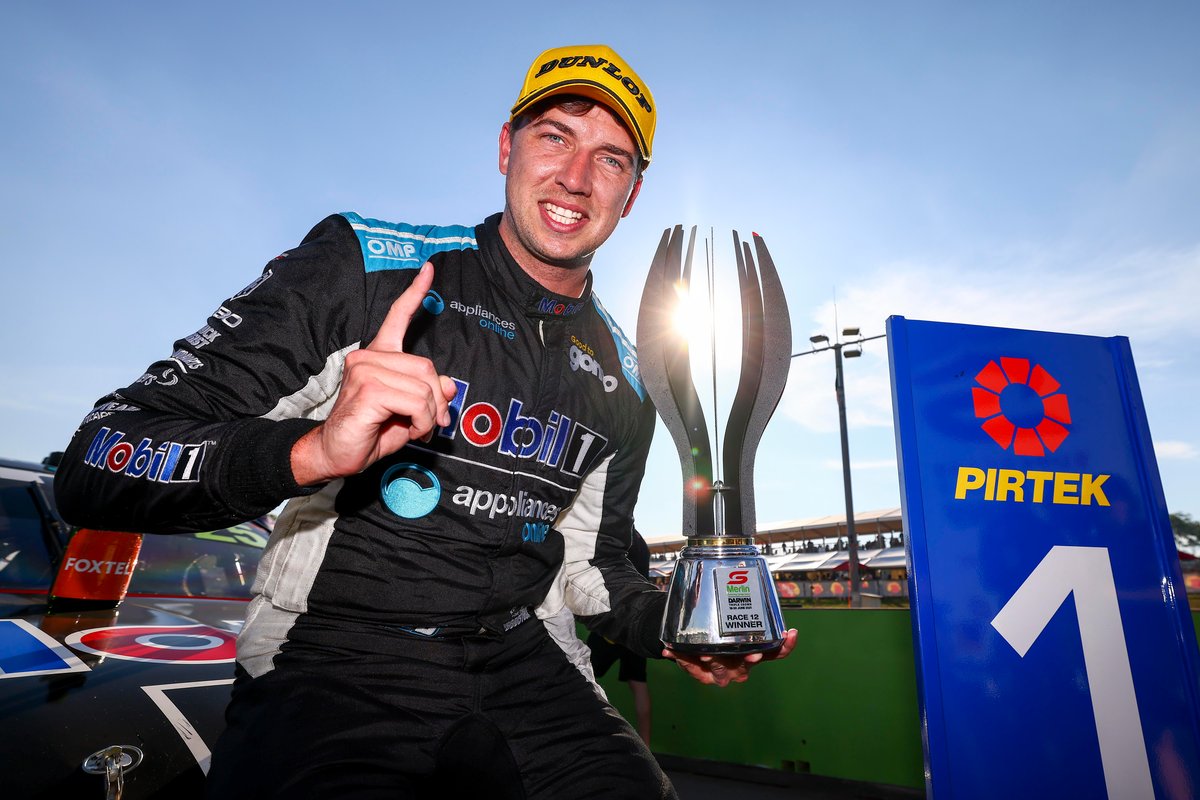 "I was pretty quick at the start and I was a bit worried about that, normally when you have a quick car at the start you get worried that the degradation is going to come. I'm super pumped, it's good to have a fast race car."

Percat finished third on the road but will now face a post-race investigation regarding a breach of the minimum tyre pressure regulations.

His car was clocked with pressures under the minimum 17psi as he rolled down pitlane following his stop, that matter now in the hands of the stewards.

Fourth came down to a battle between Brodie Kostecki (Erebus Holden) and James Courtney (Tickford Ford), which came to a head three laps from the end when Courtney dived up the inside of Kostecki at Turn 5.

The pair made contact, Kostecki short-cutting the track to Turn 7 to retain his position before being hit with a five-second penalty for an improper re-join. That dropped him from fourth on the road to ninth in the results.

Kostecki's Erebus team-mate Will Brown, racing in the stifling heat without a working cool suit, finished fifth behind Courtney.

Brothers Jake and Kurt Kostecki finished an impressive sixth and seventh ahead of Tim Slade.

Van Gisbergen fought his way back to 13th, one spot behind team-mate Jamie Whincup on what was a tough day for Triple Eight.

That means his series lead was only cut by two points back to 188, although Mostert is now only 190 points behind the Kiwi.