Shane van Gisbergen gave the brand new Holden Commodore a perfect Supercars debut, with a dominant win on the streets of Adelaide

The Triple Eight driver was untouchable across the first leg of the Adelaide 500, smart strategy and car speed to burn ensuring he could comfortably beat Walkinshaw Andretti United driver James Courtney and pre-season title-favourite Scott McLaughlin.

A slow getaway from pole meant van Gisbergen spent the opening part of the first stint patiently sitting behind McLaughlin and a fast-starting Courtney, who jumped him from the second row.

Van Gisbergen opted to charge on, waiting until lap 24 of 78 to finally hit the pitlane for the first time. It was a long stop too, the Kiwi dropping back to what was effectively fifth place after taking on a lot of fuel.

While at that stage he was 10 seconds behind leader Courtney - who had jumped McLaughlin in the stops - it quickly became clear that van Gisbergen was in the box seat in terms of both pace and strategy. He soon cleared team-mate Jamie Whincup and then Mark Winterbottom.

Within eight laps that 10s deficit to Courtney had been halved, and Courtney responded to the pressure by pitting from the effective lead just past half-distance.

McLaughlin, who now had van Gisbergen right on his boot, responded a lap later on lap 41. Van Gisbergen then made his second stop the next time around, a short fuel fill meaning he reappeared with a two-second lead over Courtney and McLaughlin.

Three safety cars between laps 52 and 62 kept the pack close, but in the final 16 laps van Gisbergen was able to stretch his legs. He comfortably eased away from Courtney and McLaughlin, then managed his pace to win by 1.2s. 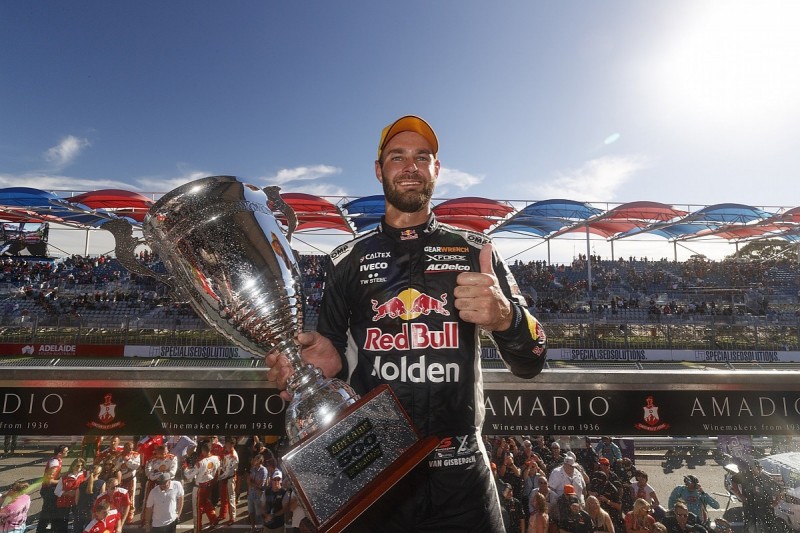 Courtney wound up second, shadowing van Gisbergen and pulling a small gap over McLaughlin during the run to the flag.

McLaughlin had his mirrors full of David Reynolds for much of the final 15 laps, the Penske Ford driver doing enough to grab the final spot on the podium.

Reynolds had earlier escaped a penalty for a tangle with Whincup that left the reigning champion back in sixth, sandwiched between the Tickford Fords of Mark Winterbottom and Chaz Mostert.

Will Davison capped off an impressive start to his career in the single-car 23Red outfit with eighth, holding off a hard-charging Craig Lowndes in the closing stages.

Fabian Coulthard endured a torrid start to the new season, ultimately bending his Penske Ford after spending most of the race outside top 10.

Running way down in 19th when the race was restarted after the first safety car, he clumsily clambered into the back of Richie Stanaway on the first lap back under green.

That left Coulthard down in 21st, while Stanaway's day turned even worse on the very next lap when he was caught up in a tangle with fellow rookies James Golding and Todd Hazelwood.