© 2020 Autosport.  All rights reserved.
Previous / Supercars must retain Holden fans - Skaife
Next / Van Gisbergen doubles up at Townsville from 12th

The Penske Ford driver stretched his points advantage with ease, converting a clean start from pole into a comfortable win.

His job was made even easier when Shane van Gisbergen, who'd run second throughout the first stint, suffered a power steering issue right before making his stop.

The Red Bull Holden driver did try and continue after stopping to swap his regular steering wheel for Triple Eight's famous 'bus wheel' to make the car easier to turn.

However he was quickly black-flagged for the persistent fluid leak.

It's unlikely van Gisbergen would have caught McLaughlin anyway, the Kiwi cruising to a 3.4 second win over Cam Waters.

"Awesome. We didn't touch the race car at all from last week. I'm feeling really happy. A bit tired, but all good," said McLaughlin. 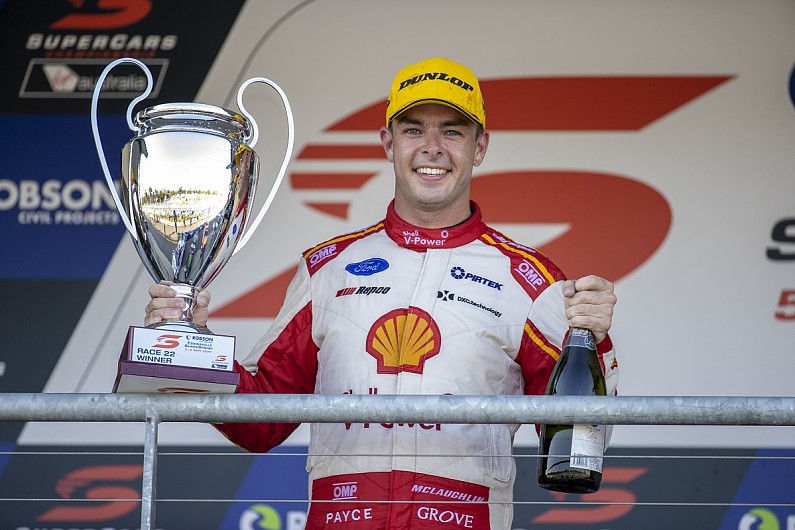 Waters, who ran third behind van Gisbergen in the first stint, did drop behind Jamie Whincup after his stop thanks to taking on three new tyres to Whincup's two.

It didn't take long for the Monster Ford to find a way back through, though, van Gisbergen's retirement leaving him in second.

He was able to match McLaughlin on the run home, but never looked like hauling the Shell Mustang in.

Chaz Mostert relegated an under-rubbered Whincup to fourth in the second stint as the Walkinshaw driver sealed the final spot on the podium. As a result, Whincup is now 143 points behind McLaughlin in the standings.

Anton De Pasquale and Nick Percat duked it out for fifth, the Erebus driver getting the job done, while Fabian Coulthard climbed his way from outside the Top 10 to seventh.

Van Gisbergen wasn't the only driver struck with power steering issues in the race, meanwhile, with David Reynolds forfeiting a Top 10 spot thanks to a similar issue in Erebus Holden.