Jamie Whincup doubled up on the streets of Townsville after cruising to victory in Sunday's first Supercars race, while Scott McLaughlin won the second.

For the second day running Whincup was untroubled across the 39 laps, converting pole to a win without conceding the effective lead at any point.

He was particularly strong across the first stint, Whincup able to gap second-placed Chaz Mostert by more than six seconds before stopping on Lap 22.

Mostert did manage to halve Whincup's advantage around the stops, but the seven-time champion was able to comfortably manage that gap in the second stint.

The final margin between the two was right on three seconds.

The top two were in a league of their own, Shane van Gisbergen finishing a hefty 16 seconds behind his Red Bull Holden team-mate in third.

That was thanks to a rapid second stint, the Kiwi charging past the likes of Scott McLaughlin, Cam Waters and James Courtney to seal the final spot on the podium.

Waters and Percat finished fourth and fifth, while McLaughlin completed a decent recovery from 13th on the grid to finish sixth.

That was largely thanks to impressive tyre life, McLaughlin stopping early but still able to mix it with the likes of Percat at the end.

Courtney ran third for much of the race, but a rear locking issue in the last 10 laps proved costly as he slipped all the way back to seventh.

Anton De Pasquale was best of the Erebus Holden in eighth, two spots ahead of teammate David Reynolds, while Scott Pye made up 10 positions to finish ninth by running long and then having the good rubber for the last 12 laps.

McLaughlin and Waters were inseparable for much of the final 39-lap race, the latter looking the faster of the two at times, but unable to find a way past. 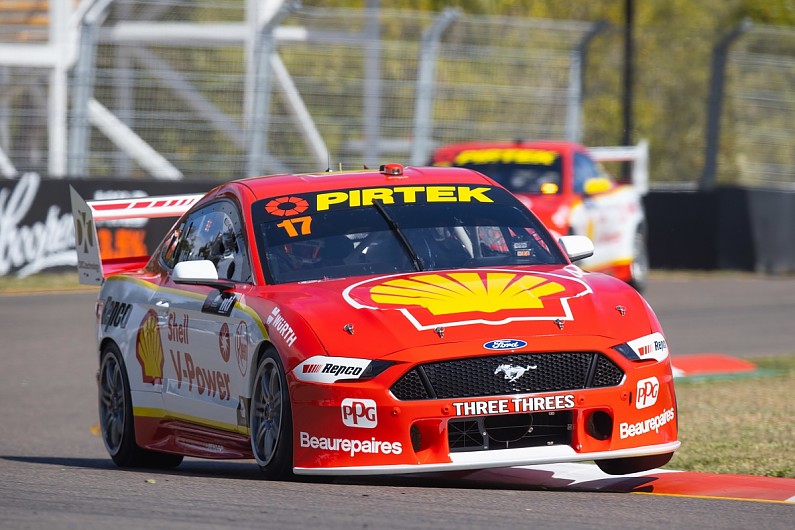 Waters briefly dropped back to third at the start, out-gunned by a quick-launching Percat into Turn 2.

The Monster Ford charged back down the inside of Percat at the same corner a lap later, though, and quickly set about hunting down the leader.

The gap between McLaughlin and Waters hung around the 1s mark for most of the stint, easing out to 1.2s right before the Tickford driver took his mandatory service on Lap 16.

McLaughlin followed suit a lap later, taking on three tyres to Waters four and emerging with about the same lead he'd taken into the stop.

It was in the first half of the second stint that Waters looked particularly quick, parking under McLaughlin's rear wing and even hinting at a move at Turn 2 on a number of occasions.

But McLaughlin was flawless in his defence, Waters eventually calling off his attack and letting the lead blow out to 4.1s at the finish.

Whincup capped off a solid weekend with a third to go with his two wins, his strategy to run long and only take on two tyres at his stop.

While he dropped points to McLaughlin in the race, Whincup's weekend effort was still a net gain in the title fight - the points gap down from 177 to 123.

Brad Jones Racing pair Percat and Todd Hazelwood finished fourth and fifth, while Scott Pye was another driver that went long in the first stint and then charged home on good rubber, which helped him climb up to sixth.