Shane van Gisbergen became the first Holden driver to win a Supercars race in 2019 with a dominant drive at Symmons Plains.

He pulled away from Fabian Coulthard in the third and final stint to break the Ford Mustang's seven-race winning steak, with the final margin back to Coulthard and David Reynolds more than five seconds.

The Red Bull Holden driver led throughout the first stint, however it took a while for him to shake Coulthard.

It was not until the race was 15 laps old that his advantage ticked over to a second, at which point van Gisbergen could pull away more rapidly.

By lap 20 of what would be a 84-lap event, the lead was closer to two seconds, with van Gisbergen then almost three seconds clear by the time Coulthard made his first stop on lap 24.

Coulthard came out behind team-mate Scott McLaughlin, who had pitted 10 laps earlier, but was quickly back into second thanks to his superior tyre condition.

On lap 29, van Gisbergen made his stop, coming back out side-by-side with Coulthard.

The ensuing battle was won by the Penske Mustang driver, as McLaughlin the got involved and tried to wrangle second from van Gisbergen.

The pair staged a brief, spectacular arm wrestle over the position, with van Gisbergen eventually getting his tyres up to temperature and taking back the spot. 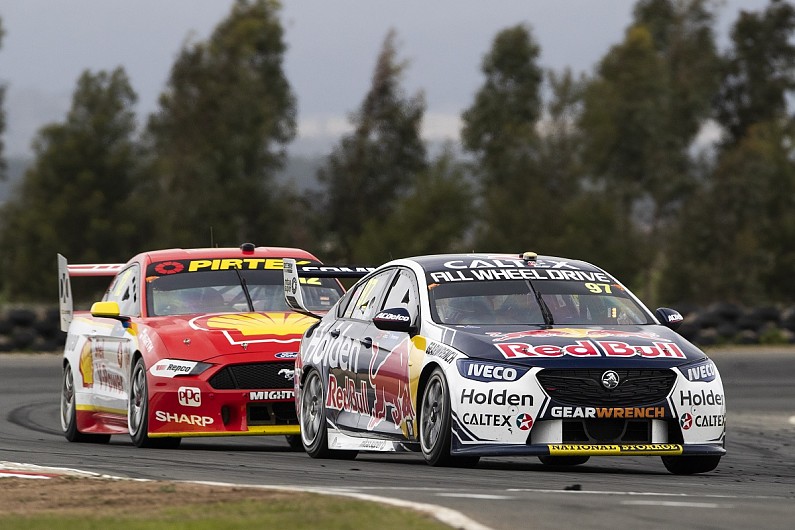 The brief distraction worked out perfectly for Coulthard, though, who found himself with a two-second lead.

But with five laps worth of tyre life up his sleeve, van Gisbergen quickly reeled the leader back in. And on lap 43 he dived under Coulthard into Turn 6 to reclaim the lead.

On lap 55 Coulthard, sitting 2.5s behind van Gisbergen, made his second stop.

The leader covered him off next time around, emerging with the same margin he'd had before coming in.

He quickly turned that in an almost five-second lead, helped by Coulthard coming under serious pressure from David Reynolds in third stint as light rain started to fall.

Coulthard managed to weather the Reynolds storm and bank second spot, but had no answer to van Gisbergen, who streaked to a 5.1s margin of victory.

"It's good to get one back," said van Gisbergen. "What an awesome race, Fabian kept getting me out of the pits, and I had a great battle with him and Scotty.

"I took off at the start and he got right back to me and I thought I was in trouble, but he burnt his tyres up.

"Once our tyre life was good I knew I'd be okay and the team did a fantastic job in the pits. We've made a huge step forward with our car."

Mark Winterbottom ran as high as fourth in the first stint but was ultimately shuffled back to sixth, followed by Nick Percat, Scott Pye, Lee Holdsworth and Chaz Mostert.

McLaughlin now holds a 124-point lead over Coulthard in the standings, with van Gisbergen moving into fourth, six points behind team-mate Whincup and 160 points adrift of the leader.