Garth Tander took victory in a dramatic first V8 Supercars race at Phillip Island, while Jamie Whincup reclaimed his position at the top of the points standings.

HRT Holden driver Tander maintained his third place starting position through the first segment of the race before reaping the rewards of a coming together between title contenders Craig Lowndes and Mark Winterbottom before the half-time interval.

Lowndes had beaten poleman Winterbottom into Turn 1 after the lights went out, but the FPR Ford racer was relentless in his pursuit of his title rival.

On the last lap before the interval, Winterbottom appeared to have finally found a way past the Triple Eight Holden before the two were embroiled in a pushing contest into the final corner, sending Lowndes into the gravel and down to 14th.

Tander, meanwhile, took avoiding action and nipped by to take the lead, which he held on to until the chequered flag after an imperious drive in the second-half of the race.

Fabian Coulthard took second having made up four places from the grid and eventually got past race-long rival Alex Davison on the penultimate lap.

Whincup was within sniffing distance of a podium finish after making the best of a disastrous qualifying performance.

The Triple Eight driver began the race in 13th following a small mistake at Turn 2 in qualifying, which cost him a likely front row start.

He made up four places on the first lap and gained further positions after Shane van Gisbergen's altercations with Chaz Mostert and Will Davison in quick succession on the seventh lap.

Starting sixth for the second portion of the race, Whincup quickly passed van Gisbergen once again and pulled off an opportunistic move on Winterbottom on the final lap to claim fourth and returned to the top of the championship.

Sixth went to Tim Blanchard who also disposed of van Gisbergen in the latter stages, while erstwhile championship leader Lowndes finished eighth, having pipped Mostert to the finish line. 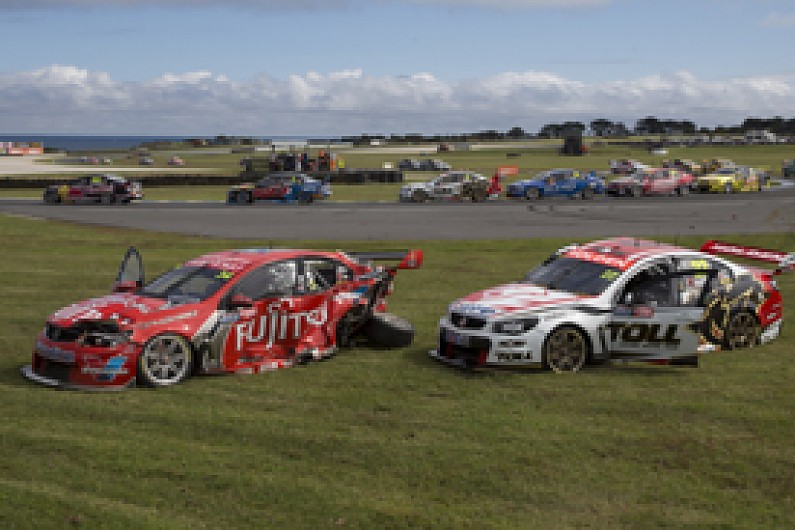 The race also featured a hefty incident involving Alexandre Premat and James Courtney who were fighting for sixth place at the time.

A deflating tyre caused Premat to go wide at Turn 3 on lap 10 and he was unable to stop his GRM Holden from taking a trip across the grass and into the side of an unsuspecting Courtney, whose car came off the worst.

The HRT Holden driver received extensive medical checks which revealed he had not broken any bones, but he had suffered soft-tissue damage and is due to undergo further observations.