Just two of the BTCC’s usual support series will be in action this weekend, but there’s still plenty to watch out for at Thruxton as the British Formula 4 and Ginetta Junior series get underway

After a dramatic British Formula 4 finale decided the 2020 crown in favour of Luke Browning, the 2021 season has some way to go to match it in the drama stakes.

But the series that launched the careers of McLaren Formula 1 ace Lando Norris, IndyCar race-winner Colton Herta and FIA Formula 3 champion Oscar Piastri looks set for another strong year as a healthy grid of 17 cars prepares for battle at Thruxton this weekend - with another star of the future potentially among them.

Meanwhile the Ginetta Junior championship also gets underway, as Elite Motorsport hopes to carry the momentum from delivering a third consecutive drivers title in 2020.

Here's what to expect from the TOCA support series this weekend. 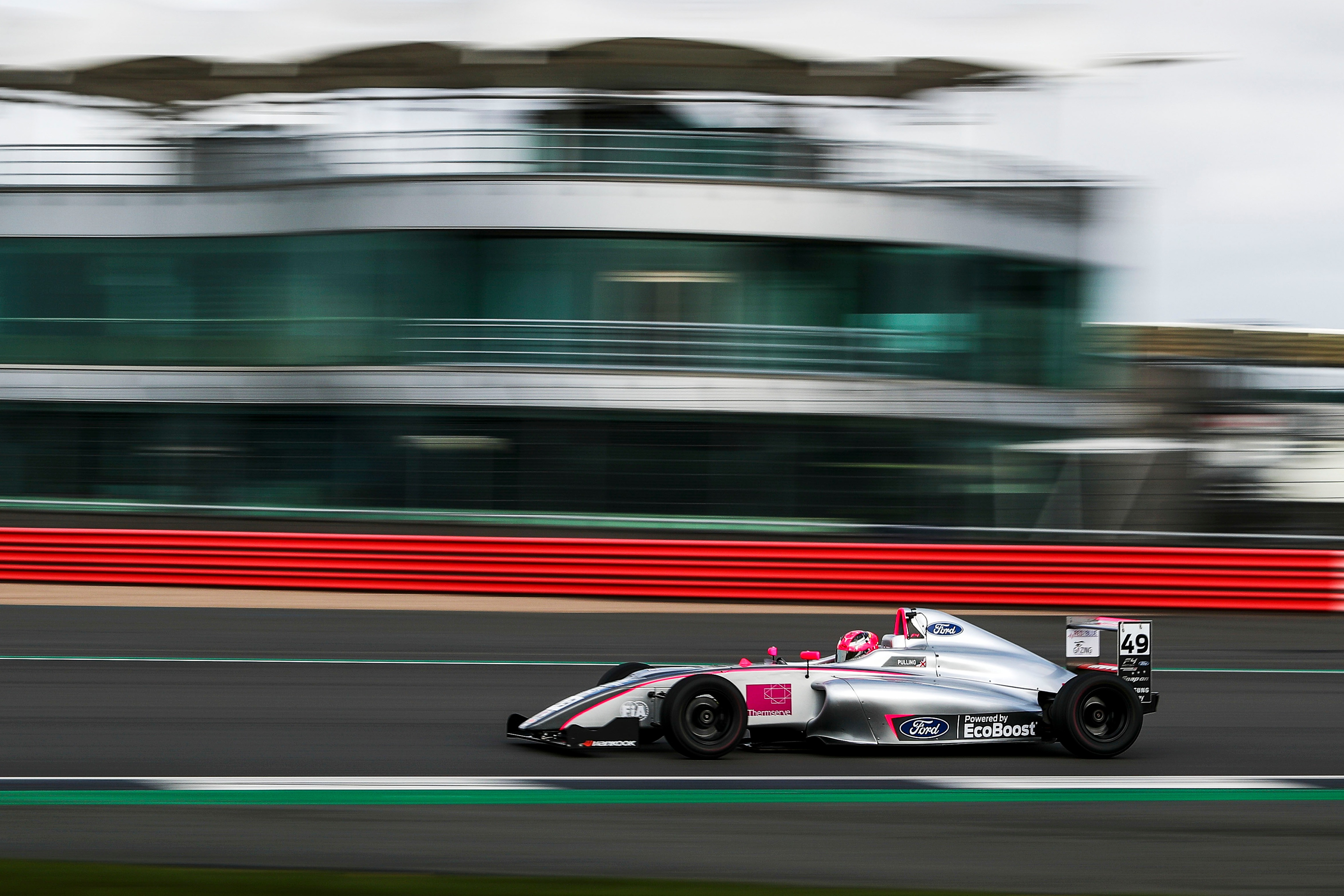 Making history is the target for Abbi Pulling this year. No female driver has ever won in British Formula 4, let alone taken an FIA F4 title. Being the first to achieve those feats are aspirations for Pulling this season.

“I made a lot of records in karting and I want to carry that success on,” says the two-time Junior TKM karting champion.

Pulling had considered a move up the single-seater ladder but has decided to remain in F4 and launch a title bid. She claimed four podiums last year with JHR Developments en route to sixth in the standings, and is feeling more confident as she stays with the team for her sophomore season.

“It was 50/50 what I’d do – I was looking at doing the Formula Regional European championship and did a test with a team in Spain,” explains Pulling. “We couldn’t find the budget and the best option was to come back and fight for the F4 title.

“I made a lot of mistakes last year, which I’ve learned from and have come back as a completely different driver – I feel I’m driving the best I’ve ever driven. I want to win the opener and just be consistent.”

Winning the opener is a realistic goal given JHR’s incredible form at Thruxton, the squad’s drivers having won the last six F4 races held at the Hampshire speedbowl. But Pulling will face no shortage of opposition this weekend – the 17-car grid is larger than British F4’s average field over the past three seasons. However, there are just three other drivers that have previously raced in the series among the entry. Expect this quartet to be fighting at the front but, unlike Pulling, the other three have all changed teams.

Former Ginetta Junior champion James Hedley is aiming for more consistency after swapping JHR for Fortec, the squad that powered Luke Browning to last year’s crown, while Roman Bilinski will be aiming to cut out some of his rookie errors having joined Carlin from Arden.

The final driver on the move is former Carlin racer Matias Zagazeta, who struggled last year but is feeling happier in his new surroundings at Argenti. “Everyone in the team is amazing – they’re all hungry to win and that pushes you on,” he says.

There’s also a host of series rookies – many making their car racing debuts – and add in the category’s new fully reversed-grid race and there will be plenty to watch out for in what could be a history-making season. 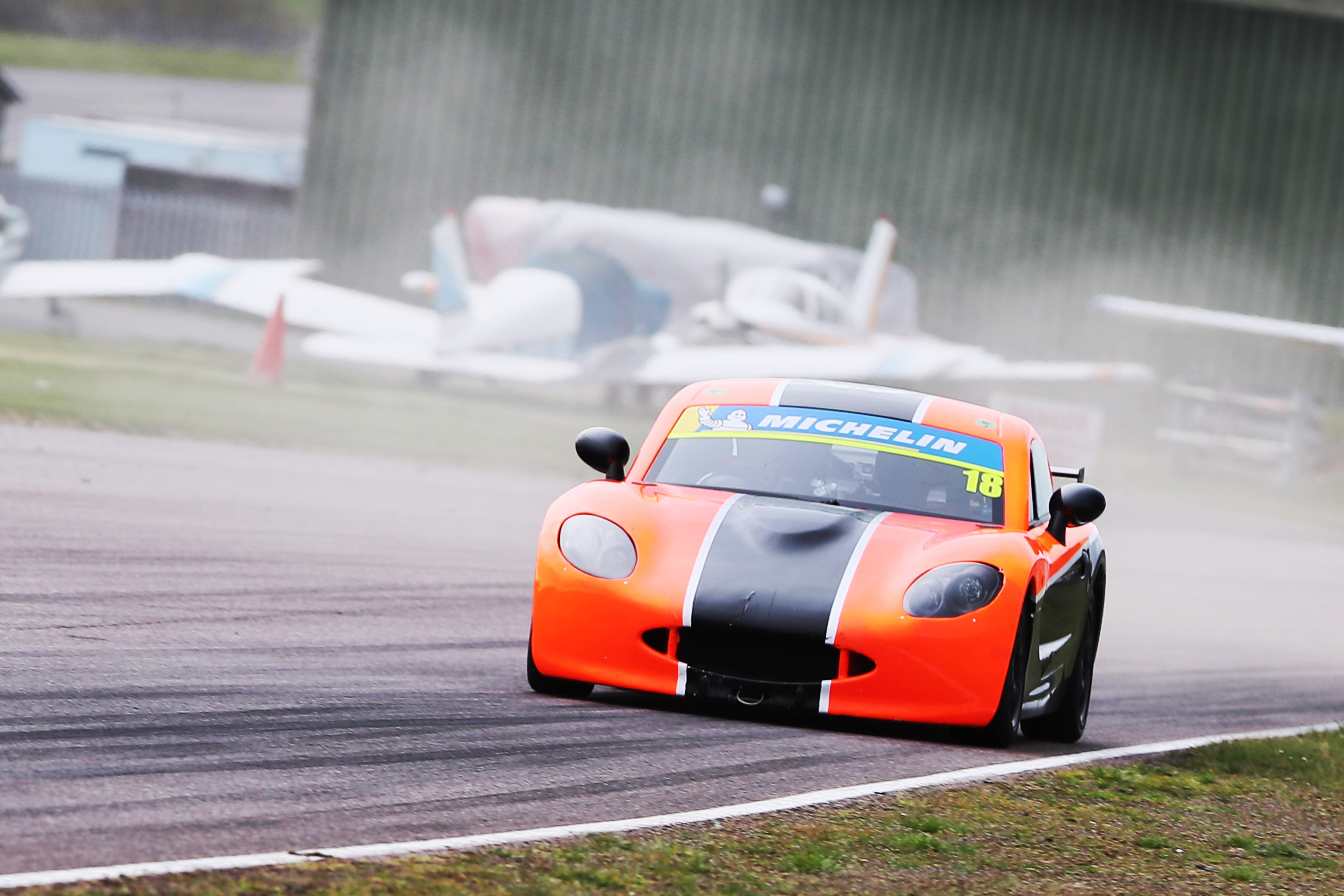 Considering Elite Motorsport drivers have won the past three Ginetta Junior crowns – and the squad played a key role in Tom Gamble’s 2017 triumph, when he joined it for the final three events – you can be pretty sure that its racers will be in the mix again this year.

After Tom Lebbon made history last year by taking the crown as a rookie – when Elite’s line-up was entirely made up of debutants – the squad has a greater range of experience among its roster this year. Seb Hopkins, a podium finisher last season, and Will Jenkins are back for a second campaign, while Joe Warhurst has some previous racing under his belt after contesting the last two events of 2020.

Then there are also three rookies – Josh Rowledge, Max Hall and Jack Sherwood – with team boss Eddie Ives marking Rowledge out as a potential star. Sherwood was a last-minute call-up after it “wasn’t feasible” for Spain-based podium finisher Tommy Pintos to race this year amid continuing travel restrictions.

“I’m feeling pretty confident, but it’s a tough championship and it’s never going to be easy,” says Ives. “I think we’re in a stronger position now than this time last year. We hope Will and Seb will be there or thereabouts, and Josh has been showing some exceptional pace.”

As has been the case for the past two seasons, the greatest threats to Elite are likely to come from R Racing, which has assembled another strong line-up. Josh Miller and Tom Edgar were two of last year’s star rookies, while Freddie Tomlinson and Aston Millar are back for another season. But it is debutants Ian Aguilera and Callum Voisin, younger brother of 2020 title contender Bailey, who Ives says have “caught our attention”.

There are plenty of other rivals to beat as well, with the 27-car grid expected for Thruxton being a record first-round Ginetta Junior entry.

“It’s a championship that more and more people are aware of and see as a valid route to single-seaters or GTs,” believes Ginetta motorsport manager Ash Gallagher, who says the category is getting stronger year-on-year. “Most of the British GT pairings had at least one Ginetta Junior graduate in them. European karting being difficult travel-wise has also potentially helped us a little bit.”

All of that makes for an intriguing battle as the drivers face the high-speed Thruxton circuit as a tricky first test.

Understudies aim to grab the spotlight 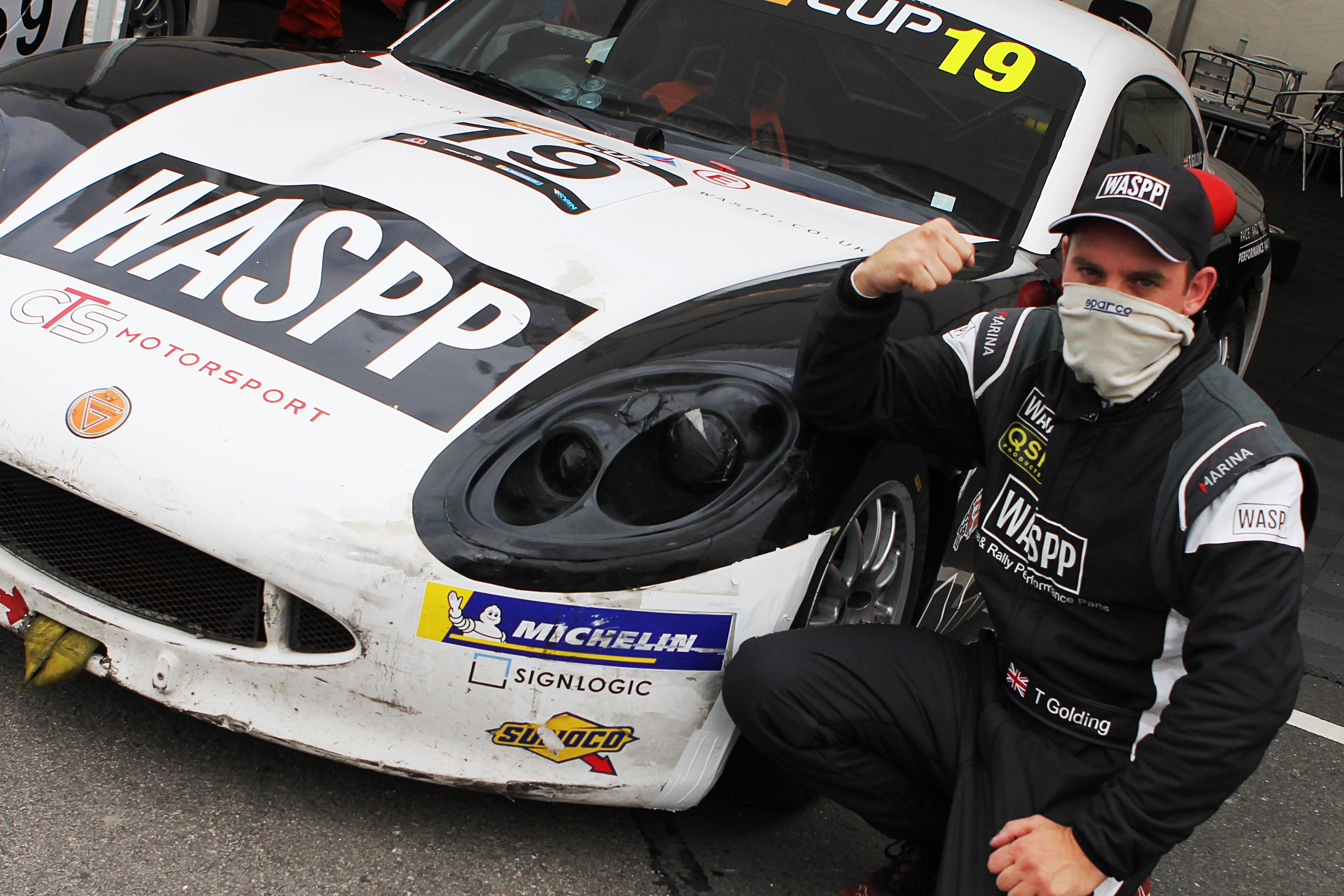 This weekend’s British Touring Car Championship opener is a very unusual one as just two of its regular support categories will be in action, creating the chance for some different series to steal the opening-round spotlight.

More than 35 cars are expected to take part in the combined Ginetta GT5 Challenge and G40 Cup grid, which should make for a stunning spectacle. Last year’s lead GT5 group have all moved on for this season, leaving a wide-open battle for the crown. Runaway 2020 G40 Cup champion Tom Golding (CTS) will be one to watch, as will Xentek Motorsport’s Josh Steed and Conner Garlick – both podium finishers in the past – alongside junior racing graduates Will Orton (Alastair Rushforth Motorsport) and Will Aspin (Elite).

Completing the guests this weekend is the Porsche Sprint Challenge GB. As Autosport closed for press, the Pro entry for the Cayman series was disappointing, with Lamborghini Super Trofeo ace Jack Bartholomew and sophomore drivers Theo Edgerton and Ethan Hawkey the leading contenders, while the Am division looks more competitive. 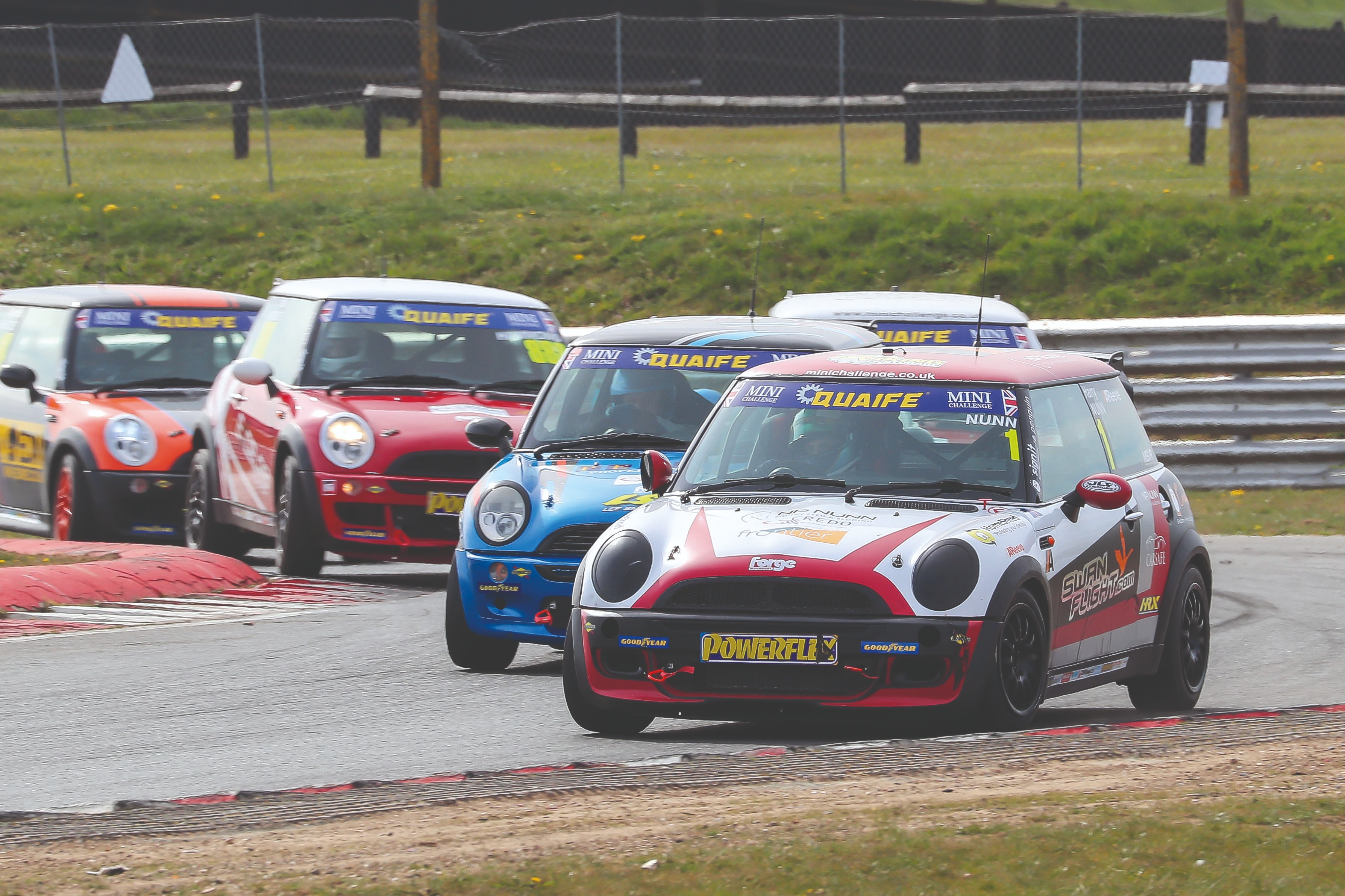