The Pickup Truck Racing Championship returns this weekend after a one-year COVID-enforced hiatus. Despite its basic architecture remaining the same since its 1997 formation, the series has a popular following based on the cars' simplicity

The Pickup Truck Racing Championship has become a popular fixture of the UK’s racing scene since it was launched in 1997, despite the machines changing little in nearly 25 years.

Like most things in 2020, it was hit hard by the coronavirus pandemic and organisers of the British Automobile Racing Club-run series made the difficult decision to cancel for the year. But things are looking promising on its return in 2021, with 22 races planned across 10 venues and a 23-car entry for this weekend’s first round at Mallory Park.

Among them are George Turiccki, who will seek to defend the title he won in 2019, and two-time champion Michael Smith, while ex-British Touring Car Championship racer Matt Simpson – whose father Jeff won the 1998 title – is set to enter selected rounds later in the season.

And while this weekend's opening round will be held behind closed doors, organisers are hopeful that the championship's loyal fanbase will soon be allowed to watch these unique machines in action.

“It was conceived, for a better word, to entertain,” says Sonny Howard, creator and organiser of the series.
“At first it was really designed more like a Tonka toy. It’s robust, easy to maintain, easy to repair but most importantly it was designed to race from a Tesco car park to a full circuit and anywhere in between.”

The design has stayed largely the same over the past two decades, with only minimal changes over the years such as uprated engines and gearboxes, while many of the vehicle’s features are controlled by the organisers to help limit costs while ensuring parity across the board. 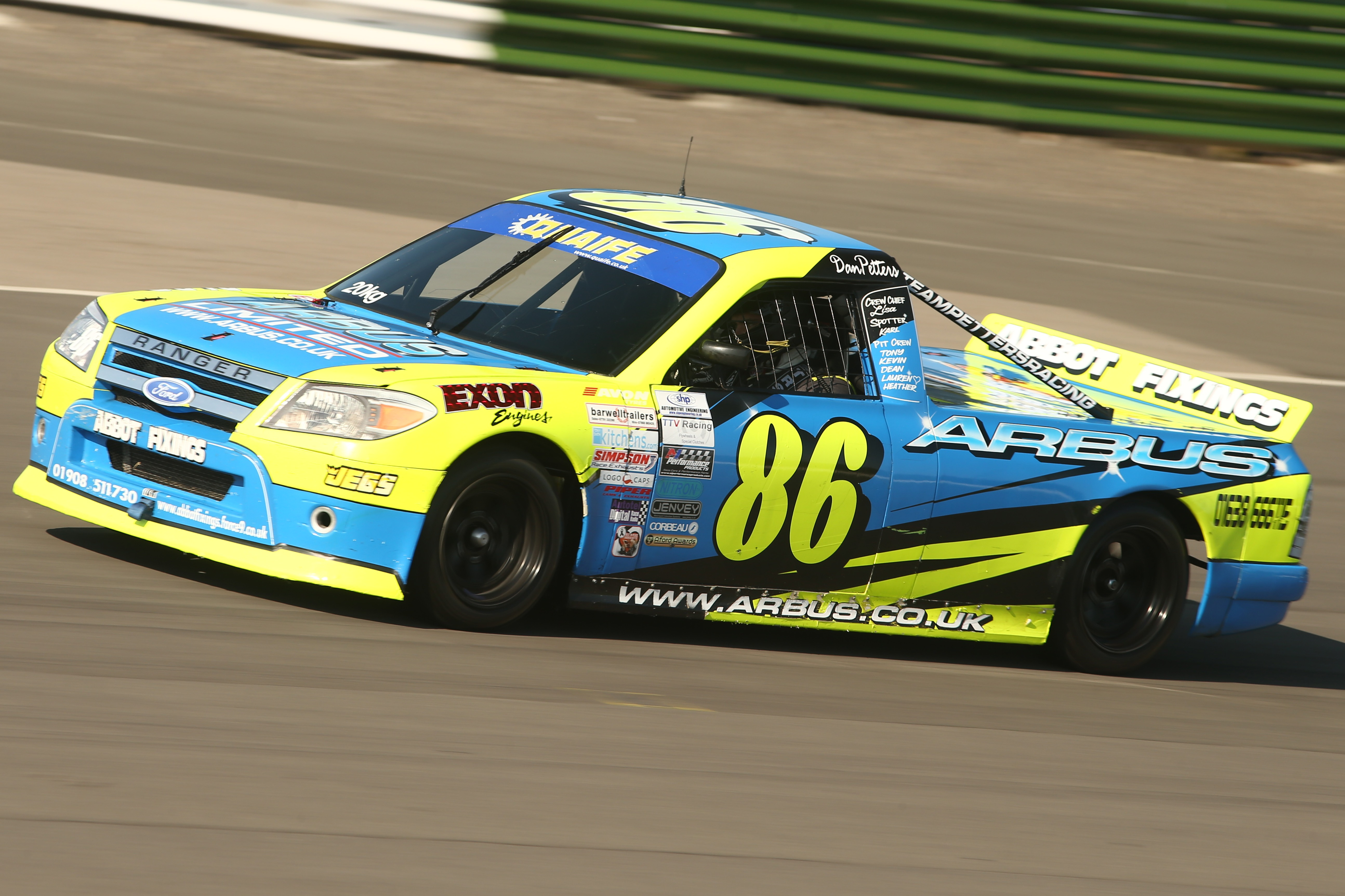 Two classes – Pro1 and Pro2 – differentiate the trucks with bigger engines, although those in the former are required to run success ballast and pickups can vary in price from £10,000 to nearly £20,000 depending on the class, engine and gearbox.

Unlike other forms of UK motorsport, drivers are allowed certified ‘spotters’ in the ilk of NASCAR. And like America’s most popular form of racing, the pickups have a strong fanbase, with hundreds of fans attending pre-COVID meetings.

The Rockingham oval was a traditional favourite venue for the series, but the Northamptonshire venue’s closure to motorsport in 2018 means only Mallory currently offers the chance to go oval racing in the UK. Despite the obvious differences between racing on an oval and the more conventional circuits on the calendar – which include Brands Hatch, Knockhill, Donington Park, Snetterton and Pembrey – no changes are allowed to be made to the fibreglass bodywork which consists of 18 separate panels that are all supplied by the championship.

Different panels are used on the front depending on whether the truck runs a Ford or GM engine, while on the rear, all have a blade spoiler which must remain in a set position.

"When drivers start the season, they start off with four brand new tyres, and four used tyres. They’re all documented, and you’re allowed to have one new tyre per meeting and that’s it" Sonny Howard

“The scrutineers have a tool for measuring them all and it was originally designed for running at Rockingham because they were doing 155mph, so that’s why it’s fixed at that angle,” says Howard.

The spaceframe chassis consists of 87 metres of tubing, including 258 separate joints and 112 brackets, and has only undergone minor changes to incorporate updated suspension brackets. 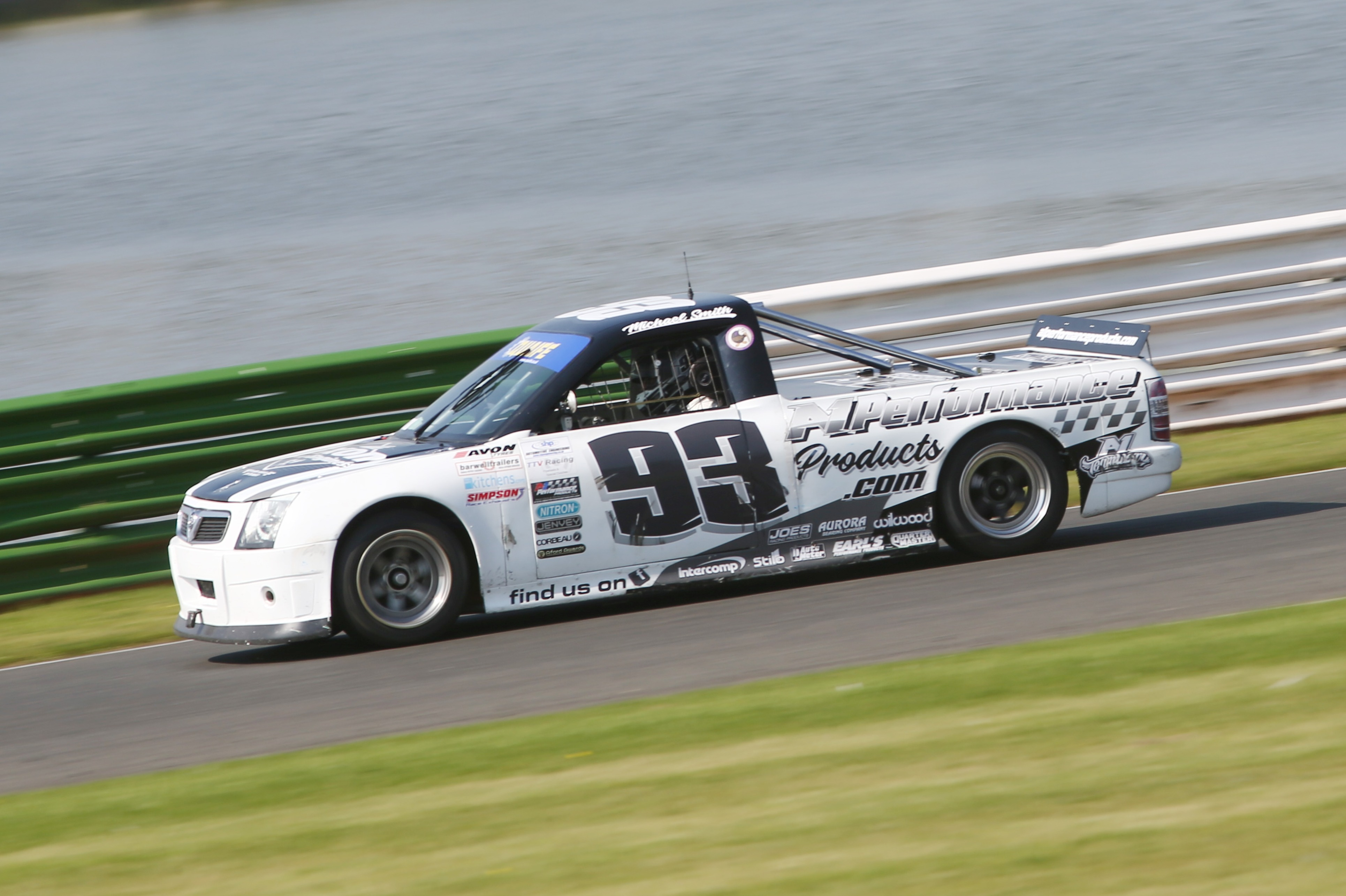 All trucks are restricted to using the same ECU, which controls the revs (limited to 7500rpm) and ignition, but competitors are allowed to change the fuel mapping, while all the pickups use aluminium rims which are fitted with control Avon tyres, both slicks and wets.

“When drivers start the season, they start off with four brand new tyres, and four used tyres,” says Howard. “They’re all documented, and you’re allowed to have one new tyre per meeting and that’s it. You’ve definitely got to do tyre management through the season and it is a challenge.”

Being American pickups, all the cars are left-hand drive and Howard believes these can be seen as a deterrent for some UK-based competitors.

“There is a stigma, for a better way of describing it, for left-hand drive,” he says. “When we were using a four-speed gearbox and a rocket-type box then you could, on a downshift, put it in the wrong selection.”
Sequential gearboxes were introduced five years ago to avoid this problem, but drivers are still able to race trucks fitted with a traditional gearbox.

“They’ve got a fixed set of ratios, so if somebody wants to use an ordinary conventional gearbox, they can,” confirms Howard.

While competitors are heavily restricted in what they can alter for a large proportion of the truck, there is scope for modification when it comes to the suspension. The trucks run double-wishbone front suspension, which has adjustable anti-dive or dive geometry, while there is a GM truck front-upright and hub. 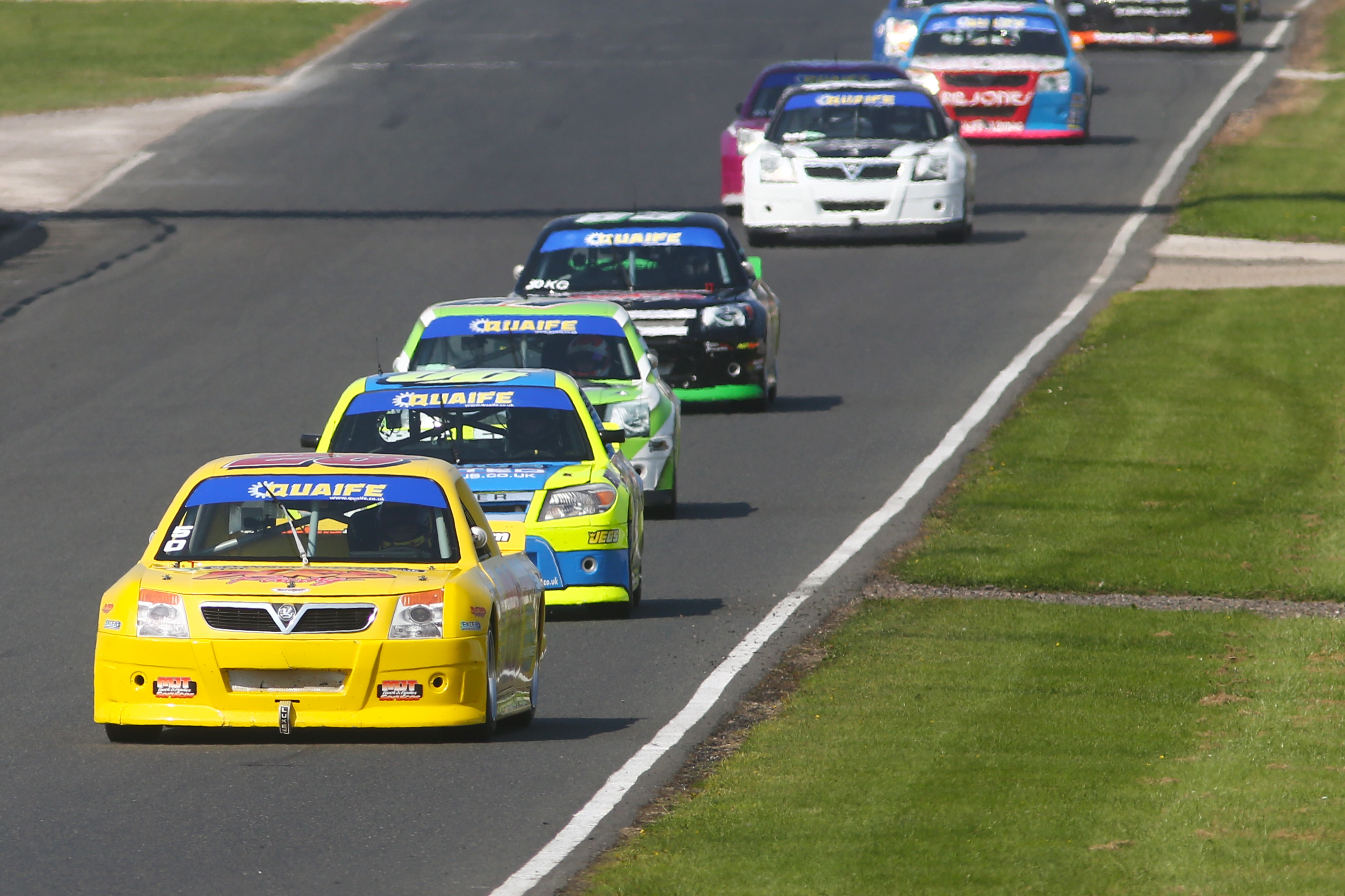 “It is fitted with an anti-roll bar on the front and there are five variations,” says Howard. “We do 2mm, 3mm, 4mm, 6mm and 8mm options, and competitors are allowed to choose whichever one they want. The truck also uses a fixed adjustable coilover, and it has a spring rate of between 750 and 900 pounds.”

On the rear, the pickup truck uses a four-link rear suspension and has a truck live axle originally from a Ford, as well as a ZF limited-slip differential.

Despite staying largely the same for nearly 25 years, there’s no denying that the Pickup Truck Racing Championship is one of the most popular and arguably entertaining champion-ships in the UK. If it ain’t broke, don’t fix it. 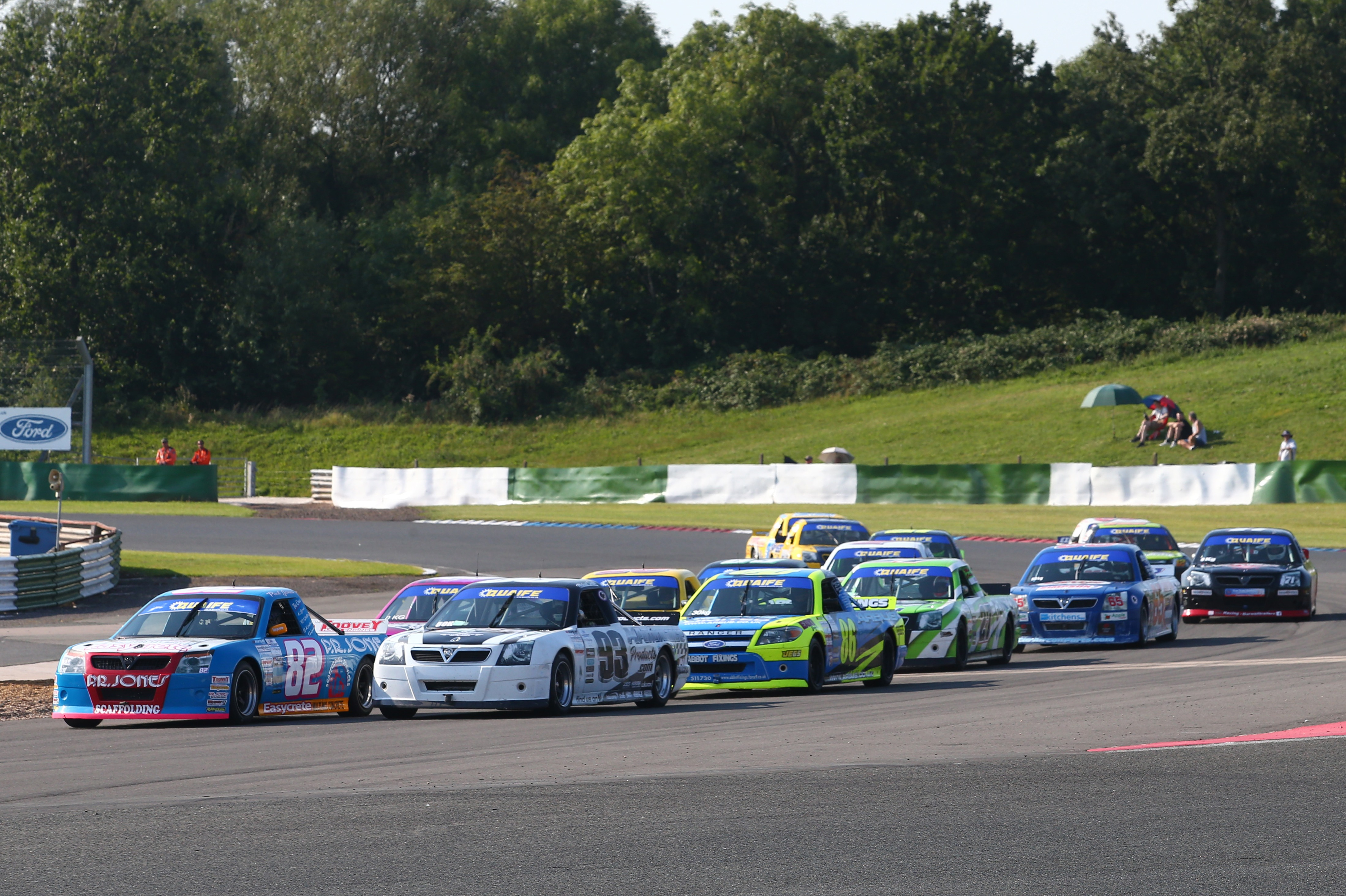