Despite being cancelled in 2020 due to COVID-19, the Donington Park Historic Festival was back bigger and better last weekend. Elsewhere, the CSCC held a bumper meeting at Thruxton and the Pickup Truck Racing Championship made a welcome return at Mallory Park.

Roger Wills and 1992 British Touring Car champion Tim Harvey proved to be the class of the field in the three-hour Pall Mall Cup contest at the Donington Historic Festival, as they guided their Lotus 15 to victory by almost a lap.

The pair qualified second, albeit only just over a tenth behind the Roy Alderslade-owned Shelby Daytona Cobra Coupe, which he was sharing alongside 2013 British Touring Car champion Andrew Jordan who, along with dad Mike, had built the car.

Wills moved to the front of the 47-car field almost instantly before an oil spill stretching from the top of the Craner Curves to Coppice instigated a 20-minute safety car period in the first half-hour as a number of cars came to grief on the slippery surface. Alderslade was among them, spinning and causing cosmetic damage to the Cobra.

Most of the field made the first of two mandatory pitstops during the caution period, with Harvey and Jordan taking over their respective cars. Another caution period before the end of the first hour gave those who hadn’t pitted the opportunity to stop, and Harvey to move back into the lead with a five-second advantage over Jordan, with Simon Evans and James Littlejohn’s Lotus Elan 26R a lap down in third.

By the time Harvey brought the Lotus in again, just after the halfway point, the lead was over 30s, with Wills extending the gap to nearly three-quarters of a minute once Alderslade had taken over the Cobra for the final stint.

The status quo remained for the final hour as Wills cruised to the flag, only nursing a gearbox issue on the final lap, which allowed Alderslade to unlap himself, as Richard Kent and Chris Ward’s Jaguar E-type completed the podium a lap down.

James Cottingham, Olly Bryant and Harvey Stanley’s E-type was promoted to fourth in the final 10 minutes as Cottingham’s other machine, a Lister-Jaguar Costin that he shared with Max Girardo, conked out. Andrew Haddon/Shaun Lynn (Lotus Elan S1) took fifth despite an extra trip through the pits, while Evans and Littlejohn lost a top-five finish due to a broken rear wishbone. 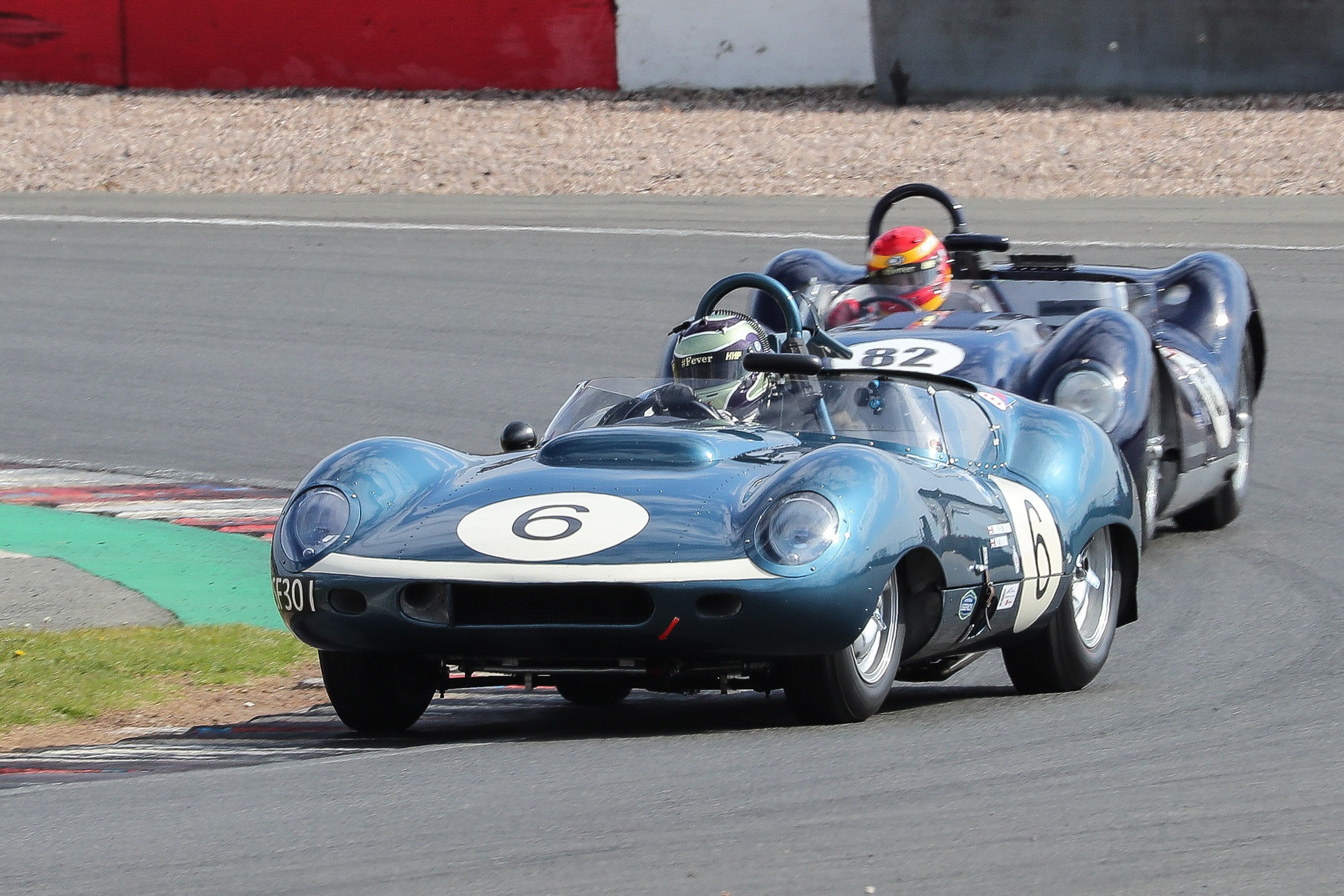 Cottingham and Bryant just won the Stirling Moss Trophy encounter at the wheel of a Ecosse Tojeiro-Jaguar as the latter took back the lead from Rob Smith (Lister Knobbly) moments before a red flag appeared with 10 minutes remaining after a big crash for Ben Adams’ Lola Mk1 exiting the Old Hairpin. Smith and Ward took second from Gary Pearson’s Costin-bodied Lister as Gregor Fisken/Sam Hancock (HWM-Jaguar) won the concurrent Woodcote Trophy in seventh.

Pearson had already claimed victory earlier in the Jaguar Classic Challenge, having been in control of the E-type contest from the start. When a safety car coincided with the opening of the pit window, it prompted everyone to stop, ensuring his lead was never under threat as Kent/Ward took second from Marcus Oeynhausen-Sierstorpff in the final minutes.

Justin and Ben Maeers (GN Parker) finished first in the 40-minute Pre-War Sports Car race, benefiting when race-long leader Rudiger Friedrichs (Alvis Firefly) had to serve a drive-through penalty for a short mandatory pitstop. Friedrichs was still runner-up, less than 5s off the lead but only three tenths ahead of Frederic Wakeman and Patrick Blakeney-Edwards’ Frazer Nash.

Chris Drake came out on top of a thrilling three-car scrap in the front-engined Formula Junior race. Ray Mallock’s U2 started from pole and initially led but was soon caught in a fight with Drake’s Terrier T4 and Andrew Hibberd’s Lola Mk2 as the gaps between the trio ebbed and flowed as they lapped backmarkers. The decisive move came on the penultimate lap, as Mallock was briefly slowed by a lapped car coming out of Coppice, allowing Drake the chance to make a move around the outside into the chicane.

Mallock made amends in the combined race for front- and rear-engined Formula Juniors, taking sixth as the highest-placed front-engined runner. European Le Mans Series driver Richard Bradley (Brabham BT2) crushed the opposition, lapping up to Mallock in the 20-minute contest. 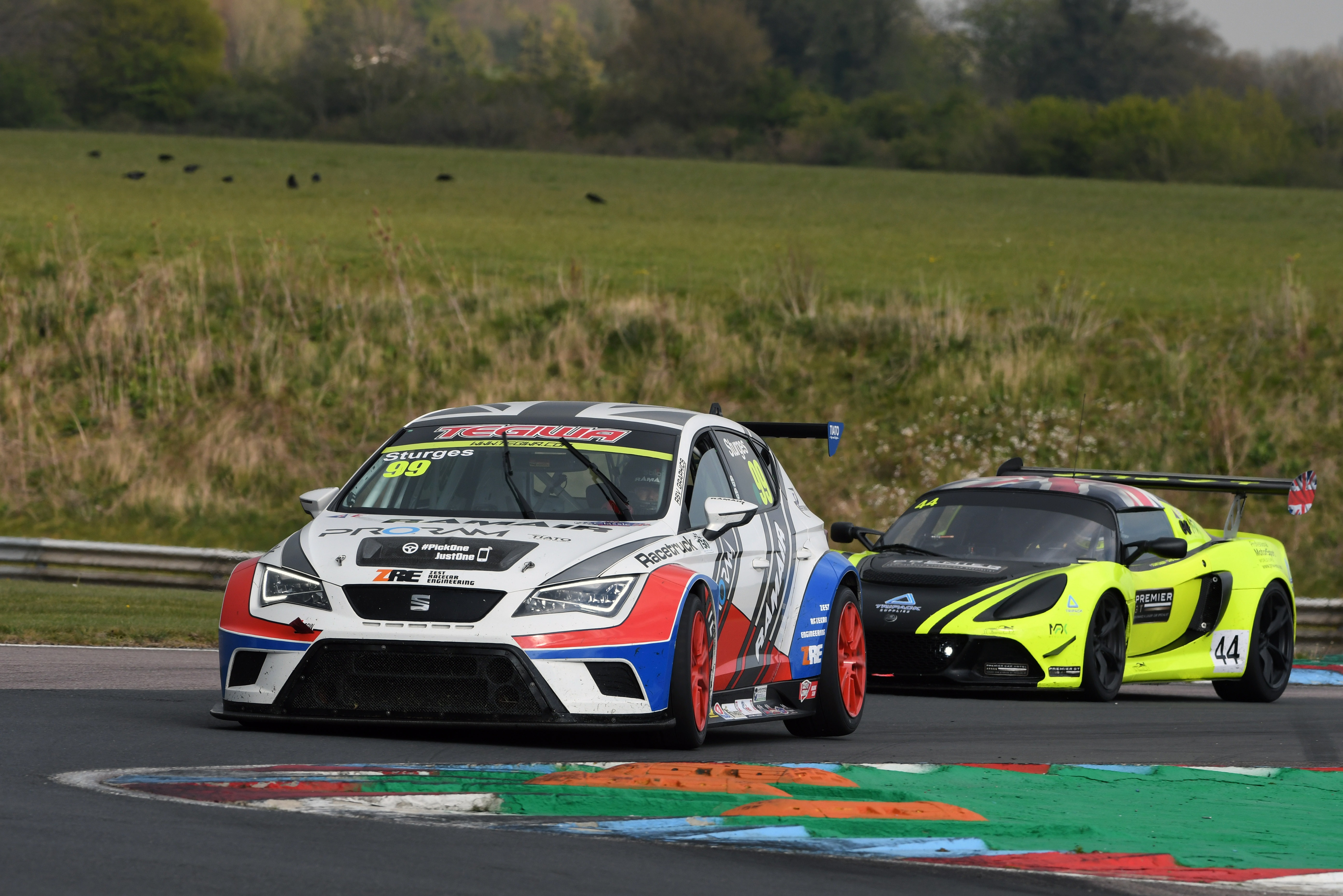 Second in the Spanish machine, behind poleman Jack Layton’s BMW E46 M3 in the first Open Series thrash, whetted Sturges’s appetite. Thereafter it was golds all the way in the 300bhp turbocharged tourers.

The opener was red-flagged within seconds when the M3s of Dominic Malone (ex-Andy Priaulx E46 WTCC) and fast-starting Adam Howarth (E36) collided as the field squeezed into Allard corner. Howarth was launched into Andrew Rath’s Lotus Europa. Layton stormed ahead, leaving Sturges to repel David Gardner (E36 M3). Max Petch (Ginetta G50) battled back to the head of a jostling quintet, and inherited fourth when David Harvey’s Lotus 340R failed at the chicane. 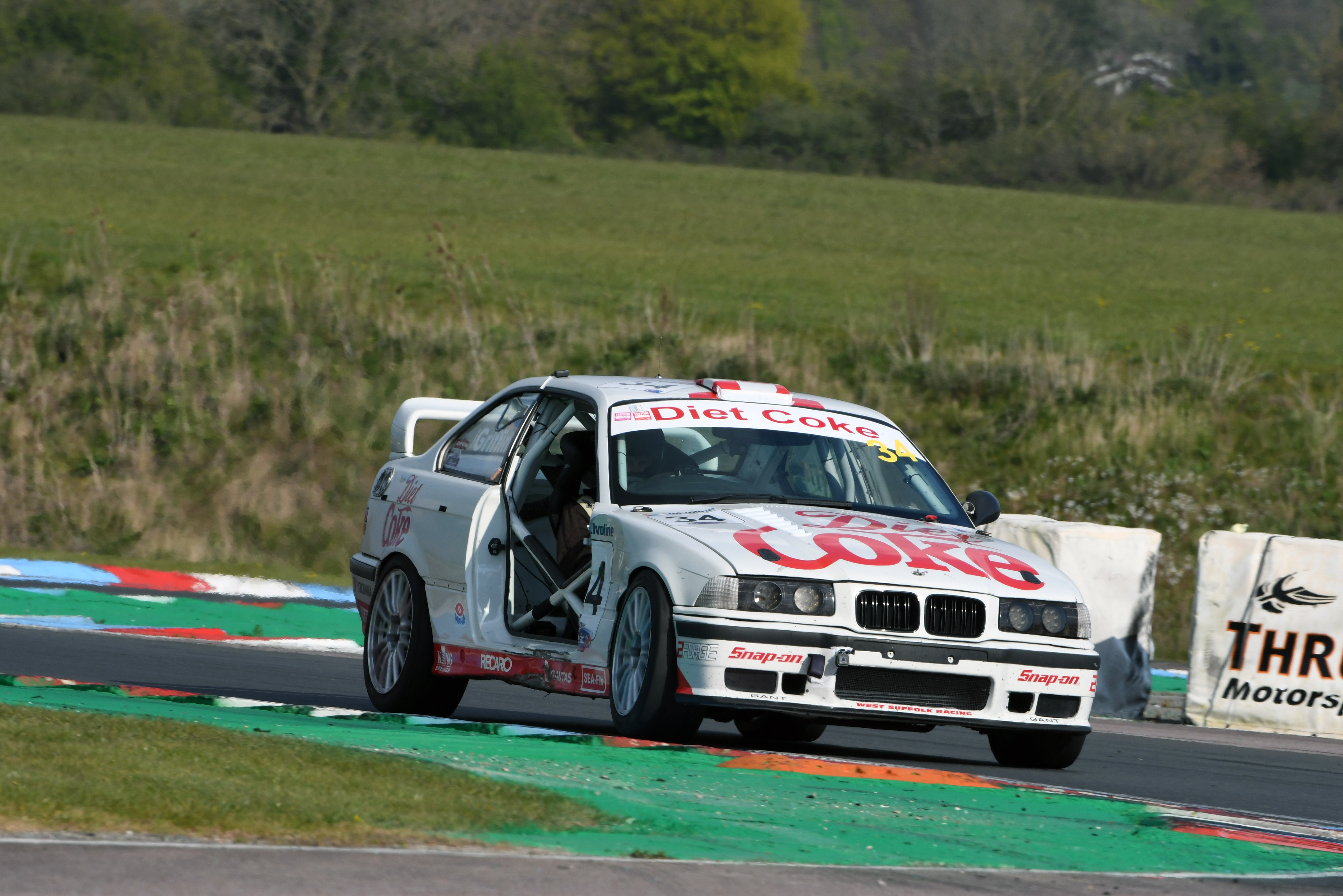 With five Special Saloons & Modsports wins apiece here since 2016, it seemed inconceivable that neither Ian Hall (Darrian Wildcat) nor Andy Southcott (spaceframe Lenham Midget-Vauxhall) would add another. Yet Southcott’s diff blew in race one while challenging Hall, who “slowed too much” and was ambushed by Tom Carey’s Honda CRX, who had shot from the back.

Two sensational scraps raged between Mini Cooper S king Nick Swift and Ollie Streek, in the company of Lyndon Griffin (Elan), and the one-litre Ginetta G4s of doughty clubmen Nigel Winchester and Brian Lambert. Soloist Streek earned fourth as his rivals’ partners could not keep up. Alas the Ginettas’ drivetrains wilted in unison after several exchanges. 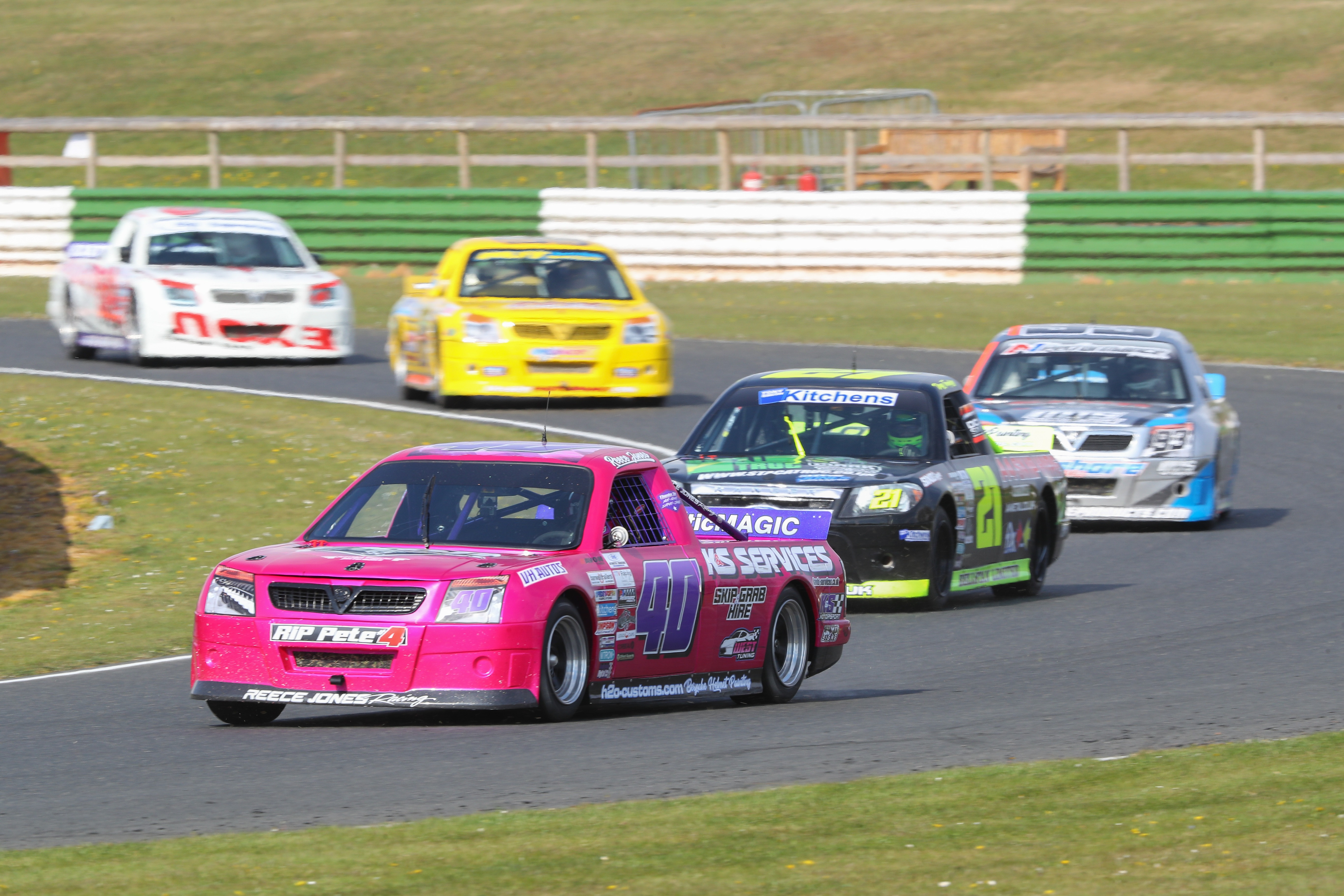 Reece Jones made a perfect start to his 2021 Pickup Truck Racing campaign as the category returned to action on the Mallory Park oval after a one-year hiatus.

Daniel Petters led the first race from pole initially, but his momentum was sapped by running wide at Turn 3 on lap four of 25 and Dean Tompkins broke through, with Petters’s ill-handling truck eventually dropping back to fifth.

Tompkins had built a decent advantage before a backmarker closed up the pack – such that, when he skated over the grass at Turn 3, the lead was briefly taken by Dale Gent before reigning champion George Turiccki established himself up front for the next 11 tours.

When Gent spun out of second at Turn 2 on lap 16, Jones – up from row three – found himself promoted to second, and he set a string of fastest laps as he reeled in Turiccki before diving to the inside at Turn 3 just over two laps from the end to grab the honours. Michael Smith completed the podium.

Petters again led away in the rematch, this time hanging on for the first nine laps before a big twitch on the exit of Turn 2 left the door open for Jones to pounce at the end of the back straight. Petters initially clung on to second place this time, but made a bad restart after a safety car period and again dropped to fifth.

The caution had been called when Smith’s truck became stranded on the exit of Turn 3 – he had got tangled up in an incident that began when Turiccki launched up the inside of Gent for third position. Tompkins picked through it to finish second, while Turiccki was third. 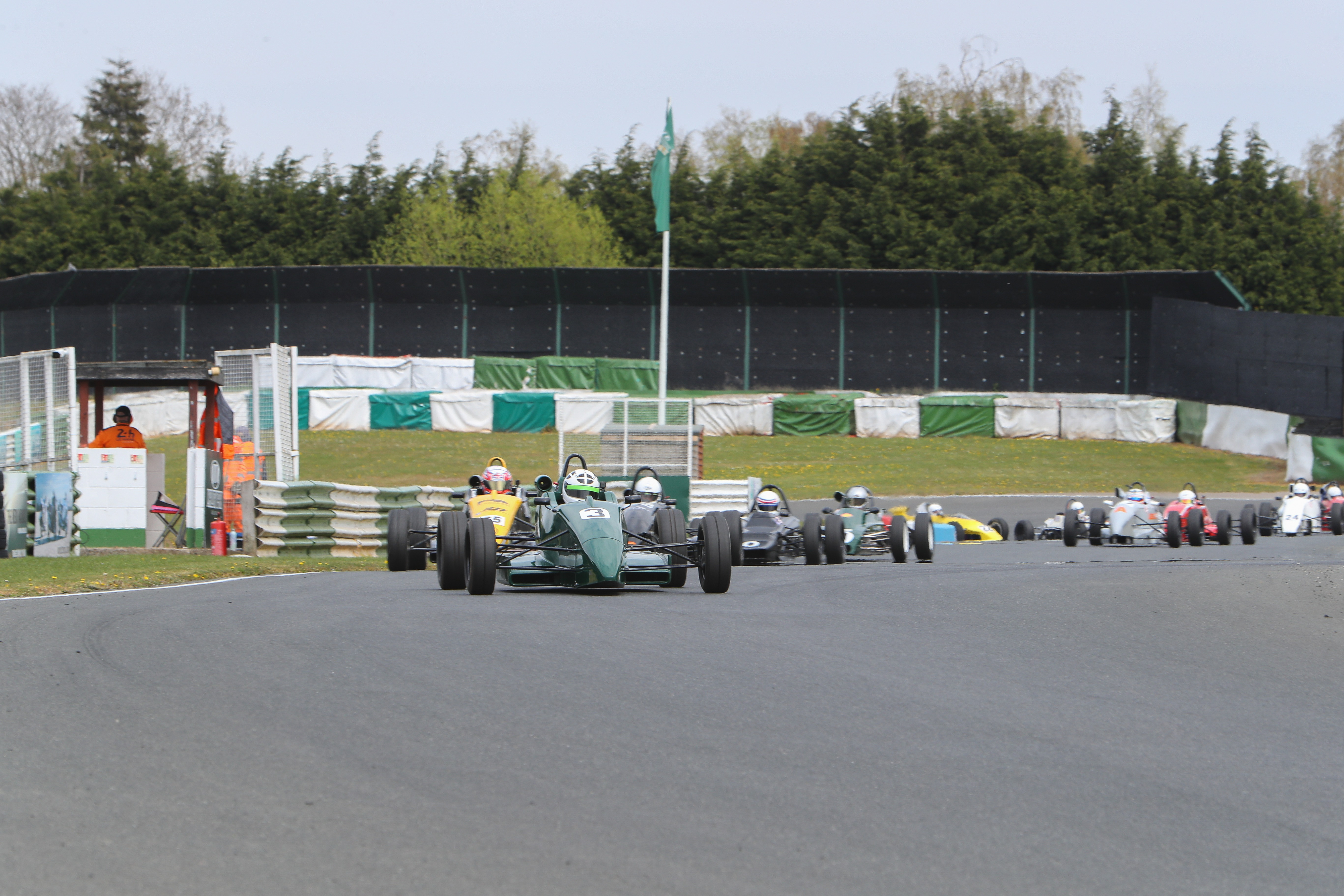 The Northern & Super Classic Formula Ford grid may have been well-subscribed, but the contests they provided were less impressive. That’s to take nothing away from a masterclass from category legend Joey Foster, who dominated both races in his Don Hardman-run Firman 2021.

Perhaps the best chance for a crowd-pleasing race – had there been a crowd – was for Foster to make bad starts and have to fight his way ahead of Jack Wolfenden’s Firman RFR17. But, in race one, Foster passed him within half a lap, and he led from the off both times in race two, for which a restart was required when Oliver Chapman’s PRS shed a wheel at the hairpin.

In fact, Wolfenden’s tardy getaway in the second attempt provided some interest as he dropped to fifth, and he only got back to second by outbraking Ben Tinkler’s Ray at Shaw’s Corner on lap six of 15.

Outside of the podium places (and the Pro class), Jordan Harrison produced two strong drives in his Lola T540E to take divisional spoils from Simon Hadfield’s Hawke DL2B and the more modern Swift SC94F of Chris Hodgen, who ran fourth overall for a while in the second bout.

There was a wonderful battle in the Northern Saloon and Sports Car opener between brothers Paul and Jon Woolfitt. They had both just lapped the third-placed Marcos Mantis of Colin Simpson when it was resolved two laps from the end, Jon’s Spire GTR grabbing the advantage from Paul’s Lotus Exige at the hairpin. Jon romped home in race two, with the Exige fading to third behind the Elise of David Brewis. 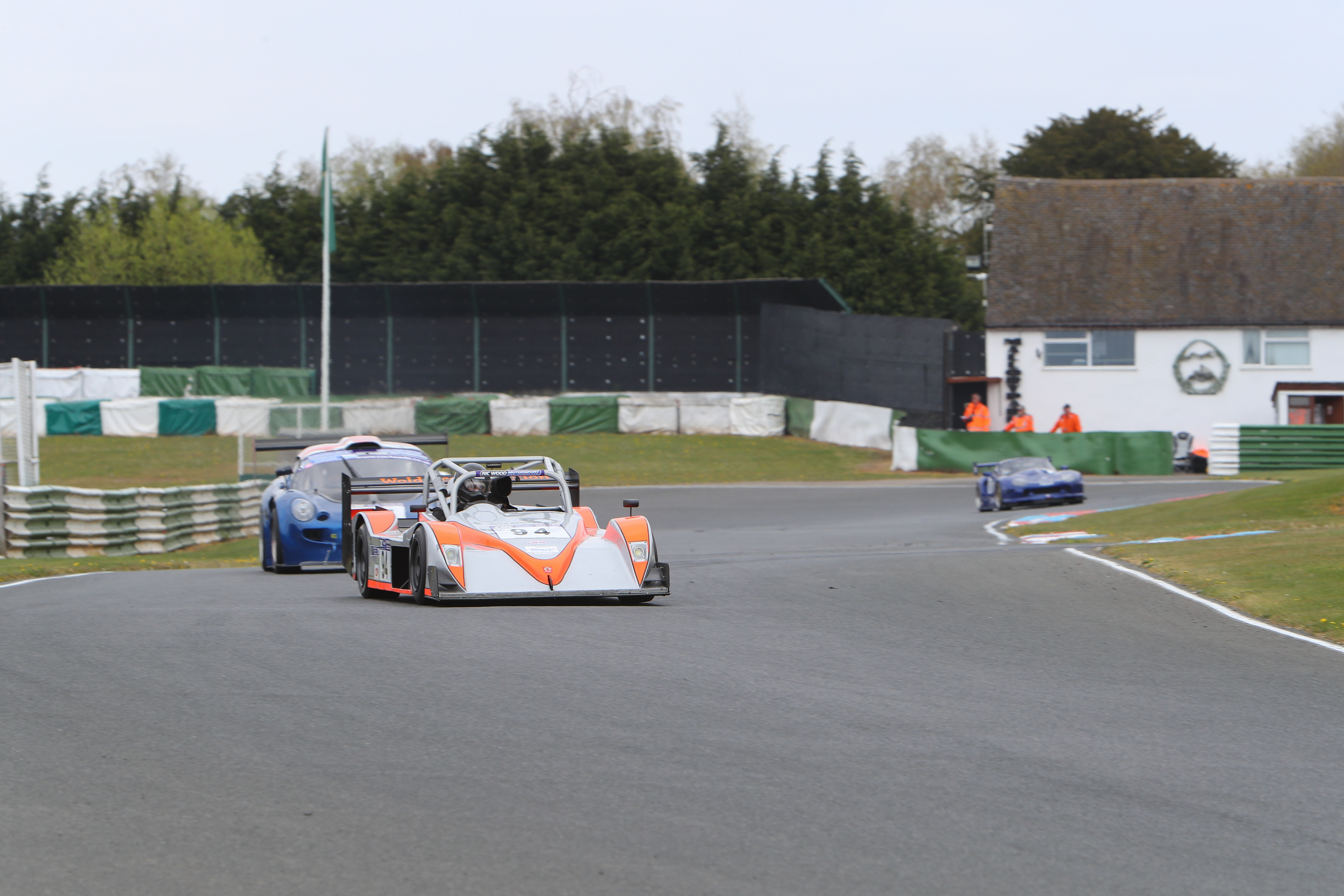