Reigning British Formula 4 champion Kiern Jewiss will step up to the BRDC British F3 Championship with Douglas Motorsport in 2019.

The 16-year-old, who took six wins and the British F4 title last season with Double R, will return to Douglas having contested the 2017 Ginetta Junior Championship with the squad.

Double R won the 2016 and '18 British F3 drivers' title with Matheus Leist and Linus Lundqvist respectively, but after testing with both teams last year Jewiss has opted for a move to Wayne Douglas's outfit.

"It wasn't an easy decision, there wasn't anything really between them, they're very similar teams and I think both cars are [run] very similar," said Jewiss, who was a finalist for the 2018 McLaren Autosport BRDC Award.

"The first few days were quite a big learning curve with the downforce, I would say understanding that is the single biggest thing.

"It's just getting used to what the car likes, obviously it stops better because it has better brakes [than the F4 car] and it's just fine-tuning everything to get the most out of it.

"With the F4 car there's not as much to it, you can get your head around it, but with the British F3 [Tatuus-Cosworth] car there's a lot more to fine-tune."

Despite eyeing up a potential move to Europe, uncertainty regarding the FIA's new Regional F3 concept prompted Jewiss to join British F3 and he has become the first British F4 champion to join the series full-time. 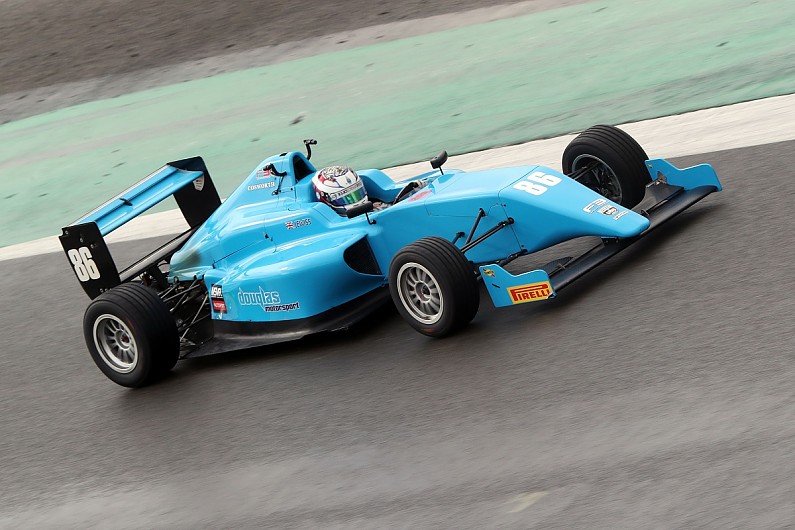 "I think we had eyed the series up for quite a while especially with everything going on with other F3 series in Europe," said Jewiss.

"It's not easy to jump into a car where everything is new and when you've got to make each year [in your career] count."

British F3 will hold eight rounds this season - seven of which will support British GT once again - including trips to Oulton Park, Snetterton, Silverstone, Donington Park, Spa-Francorchamps and Brands Hatch.

It is not yet clear if the series will still retain its F3 name for the coming season, as it has not had Regional F3 status granted by the FIA.

Six drivers have so far been confirmed for Jewiss' former series, British F4, with Ginetta Junior star Luke Browning the most notable signing after agreeing a deal with Richardson Racing.

Carlin makes its return to F4 this season and has signed one of Browning's Ginetta Junior rivals in Fin Green, while Josh Skelton (JHR) is currently the only 2018 driver confirmed to be remaining in the series for another year.