Team Penske's Ryan Blaney booked his spot in the next stage of the NASCAR Cup Series playoffs with victory at Talladega, in a race of high attrition

The race, suspended after just one stage on Sunday due to poor weather, boiled down to a two-lap shootout for the win after a red flag was thrown on lap 181 of 188 following a big accident for the leading pack of cars.

After the debris was cleared, Blaney led the restart, until Ryan Newman came charging past on the final tour of the 2.66-mile circuit, curtesy of a push from Denny Hamlin.

Blaney managed to edge his #22 Ford Mustang back into the lead later in the lap, with a photo finish required to separate the two.

Newman's #6 Roush Fenway Mustang was just 0.007s behind Blaney, who became the second Cup driver to book his place in the 'round of 8' after last week's Dover race winner Kyle Larson.

The second stage of the race followed the script laid out in the first on Sunday, with manufacturers grouping together around the superspeedway to try to help their drivers in the draft.

In the second 55-lapper, running was consistent with the likes of Jimmie Johnson, Chase Elliott and Keselowski taking turns out front, until a lap 106 crash brought things to a premature end.

Clint Bowyer took his first stage win of the year as a result, as the field reset ahead of the final 78-lap stage, ahead of Logano and Keselowski. 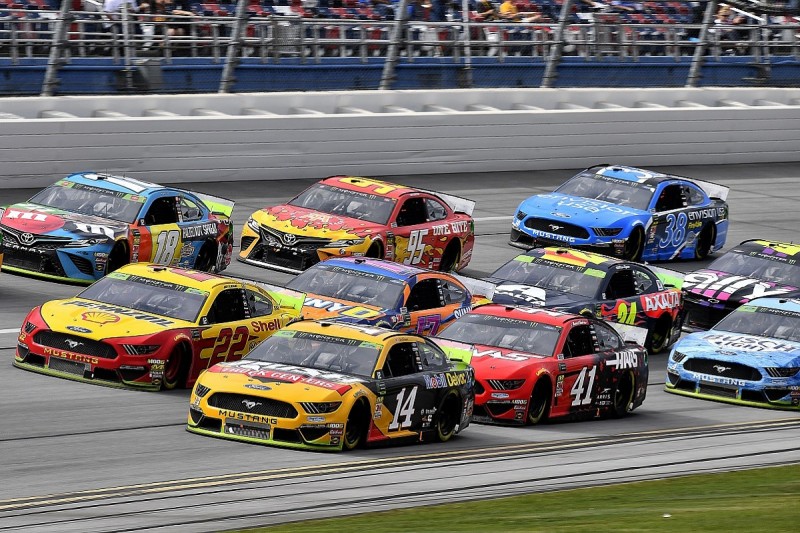 The race remained a slipstream fest, as Ricky Stenhouse Jr, Bowyer, Logano and stage one winner William Byron all took turns leading, until lap 162 when the second big crash occurred.

Leader Byron was hit by Kurt Busch, who then speared into Logano. The champion was lucky not to flip, but his Ford suffered severe damage to the left-rear fender and Penske had to make running repairs to get him to the end.

After a seven-lap caution period, Stenhouse hit the front until the lap 181 red flag incident that suspended running for around 20 minutes while the circuit was cleared.

Denny Hamlin, who had started the race at the back following an engine failure in practice, made up 33 places within four laps in Sunday's running and continued the strong showing on Monday as he took a third-place finish in the #11 Joe Gibbs Toyota Camry.

Stenhouse and Ty Dillion rounded out the top 10, as Logano limped home in 11th, but banked precious stage points to leave him 18 points ahead of current cutoff going into the final race in the 'round of 12' at Kansas next Sunday.