Ross Chastain beat AJ Allmendinger and Alex Bowman in a last-lap battle to secure NASCAR Cup victory at the Circuit of the Americas - taking his and Trackhouse Racing's first win.

As a late caution sent the race into a two-lap overtime, Tyler Reddick held the lead - but Chastain used a deft move in the esses to reclaim the lead.

Chastain took the white flag – signalling the last lap – as the leader but Allmendinger and Bowman did not let him get away.

At the penultimate corner, Chastain nudged Allmendinger who careened into the path of Bowman, sending both cars off course and Chastain escaped with his first career Cup Series victory in 121 starts.

The win is the first for Trackhouse Racing, which is in just its second full-time year of Cup series competition. The team is co-owned by Grammy Award-winning rapper Pitbull and former driver Justin Marks.

“It’s insane,” Chastain said. “To go up against some of the best with AJ, I mean, I know he is going to be upset with me, but we raced hard, both of us, and he owes me one.

“But when it comes to a Cup win, man, I can’t let that go down without a fight. People don’t know how good this group is. I can’t believe Justin Marks hired me to drive this car.”

Asked how he managed to win after losing control of the race on the final restart, Chastain said, “I don’t know how we got back by. I was so worried about AJ on the second-to-last restart that I let Tyler drive right by both of us. 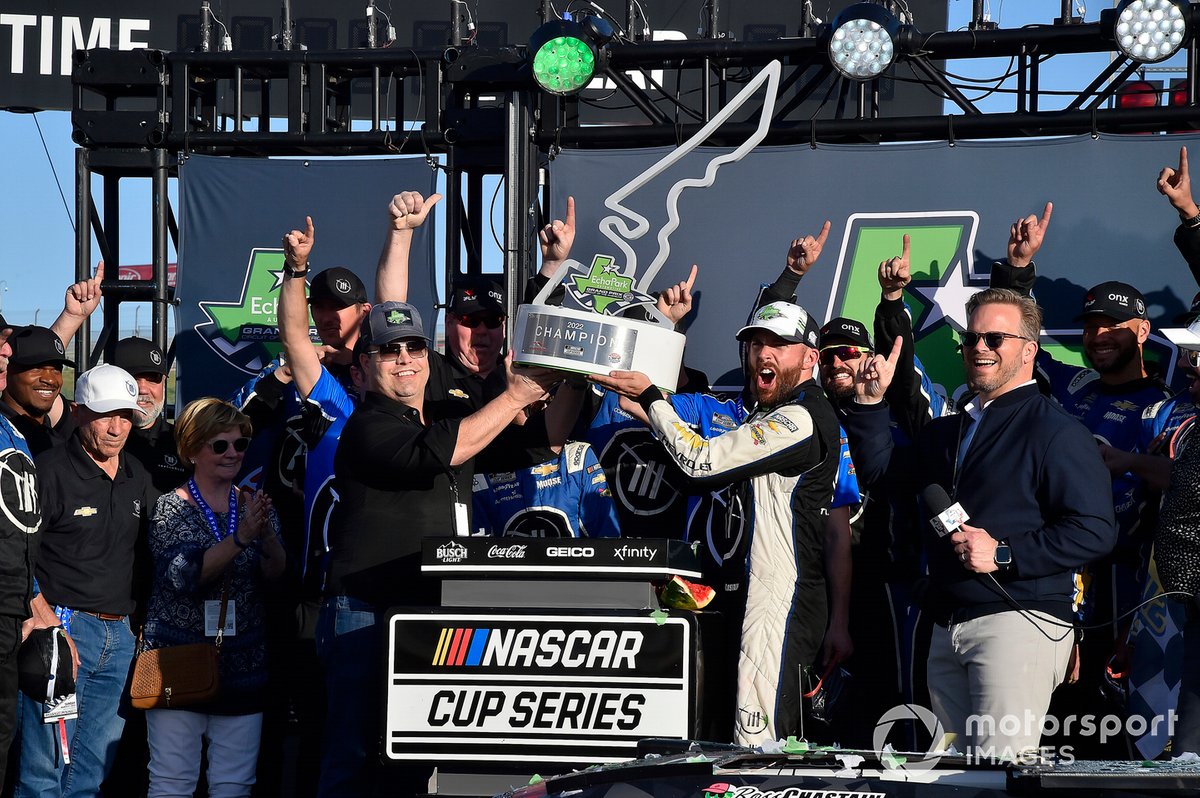 “I was thinking about on those late restarts, my dad used to make me race on old tyres, and back then I was not going to win. It was in my head before I even started. It crossed my mind, like, ‘We’re not going to win, we’re on old tyres’, but I couldn’t think that way."

Chastain's victory continues an impressive run in which the Floridian has not finished outside of the top three in the last four Cup races.

Bowman recovered from the final-lap skirmish with second place as Allmendinger bore the brunt of the incident, being sent into the gravel and was classified a lap down in 33rd place.

Reddick, whose own chances of victory had evaporated within overtime having passed Chastain and Allmendinger for the lead, finished fifth ahead of polesitter Ryan Blaney.

Martin Truex Jr ended the day in seventh ahead of Penske rookie Austin Cindric, while Erik Jones and Austin Dillon completed the top 10.