The Joe Gibbs Racing Toyota driver didn't need to win the race after a crash in Stage 3 took out a number of playoff contenders and meant Busch would have made the cut on points, nevertheless he dominated the final segment to secure victory.

Joining him in the 'championship four' will be Kevin Harvick, Martin Truex Jr and Martinsville winner Joey Logano.

Harvick dominated the first stage of the race but suffered a flat tyre on the penultimate lap of the stage. The issue, along with him entering a closed pit and getting penalised, moved him to the back of the field and a lap down.

The 2014 Cup champion's misfortune handed the first stage win of the day to Chase Elliott, who had been in second behind Harvick for the duration of the first part of the race.

It wasn't until the first caution of the race on lap 96 of 312 that Harvick managed to get back onto the lead lap. The yellow flag was caused by a spin for Logano.

The Penske Ford driver was one of several drivers to suffer a left-rear puncture, and he spun into the wall at Turn 3, taking him out of the race.

Thanks to his win at Martinsville last month, his retirement had no bearing on his championship position.

A second caution was brought out on lap 133 for a similar incident involving title contender Clint Bowyer.

During the caution period all of the leaders, including Kurt Busch who had taken to lead at the start of the second stage, pitted.

But the elder Busch passed the pace car on his way into the pits, resulting in a penalty. The infraction also made him the second race-leading Stewart-Haas driver to be sent to the back of the field after Harvick.

That handed the lead to Truex, although he wouldn't stay at the front for long with Kyle Busch making a move for the lead with five laps of the stage remaining. He held on to win the stage and lead going into the final part of the 312-lap race.

Elliott retook the lead going onto lap 225 but during a caution period caused by backmarker Tanner Berryhill, he became the third race leader to restart at the rear of the field after he was caught speeding in the pitlane.

Following a red flag period to clear up Ricky Stenhouse Jr's Ford after he hit a wall and suffered his second fire of the weekend, Erik Jones had the lead for the first time. While the leaders pitted during the preceding caution period, Jones stayed out. 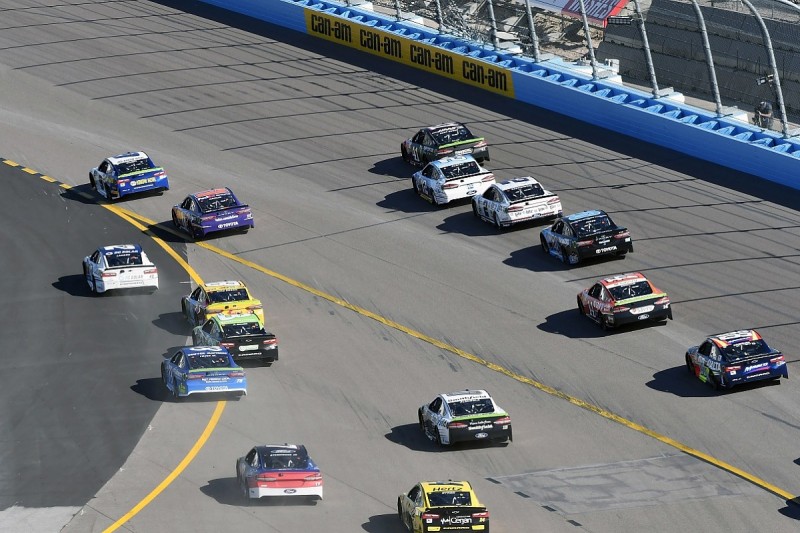 He wasn't able to make the most of the position though, and his poor restart set about a chain reaction that would prove to be the race's defining moment.

While getting loose in Turn 2, Jones moved playoff contender Kurt Busch up the track. Busch was in turn collected by Denny Hamlin, with the pair colliding with Elliott.

The incident eliminated both Kurt Busch and Elliott from the race and as a result championship contention. The crash also ensured that Kyle Busch would be locked into the championship four on points, regardless of whether he won or not.

That meant that Aric Almirola became the only championship spoiler, but he had to win the race to ensure he would advance.

Ultimately, despite briefly getting up to second, Almirola missed out with Kyle Busch leading home Brad Keselowski and Kyle Larson - who moved up after a late race charge.

A fightback to fifth was enough for Harvick, who lost his previous guaranteed spot after a penalty last week in Texas, to qualify on points.

A poor final restart dropped Truex to 14th at the chequered flag, but the reigning series champion only needed to finish on the lead lap after the earlier incident.

Kurt Busch and Elliott blame themselves for NASCAR title-race exits