Team Penske's Brad Keselowski dominated the latter stages of the NASCAR Cup Series race at New Hampshire for his third win of 2020, his first at the venue since 2014

Keselowski's Ford Mustang was engaged in a duel for the lead with the Joe Gibbs Toyota Camry of Denny Hamlin throughout the opening two stages of the 301-lap race - the duo swapping the lead 12 times among themselves.

Shortly after the restart for the final segment, on lap 221, stage two winner Keselowski slipped past the #11 Camry to claim a lead he would not lose in the remaining 80 laps, comfortably holding Hamlin at bay by around one-to-two seconds to record the 33rd Cup win of his career - and first since Bristol in early June.

Hamlin, who had scooped stage one honours for JGR, was in turn 6.0s clear of team-mate Martin Truex Jr, who recorded a fourth top-three finish of the campaign.

The leading quartet was completed by Penske's Joey Logano - with the four drivers overcoming any potential fuel worries, legacy of an aggressive strategy by their teams.

On lap 204, the caution was thrown after Matt Kenseth's #42 Chip Ganassi Mustang machine blew a second tyre in just eight laps, with Keselowski leading the charge to pit-road for those who had not stopped during an earlier caution period for a Christopher Bell spin. 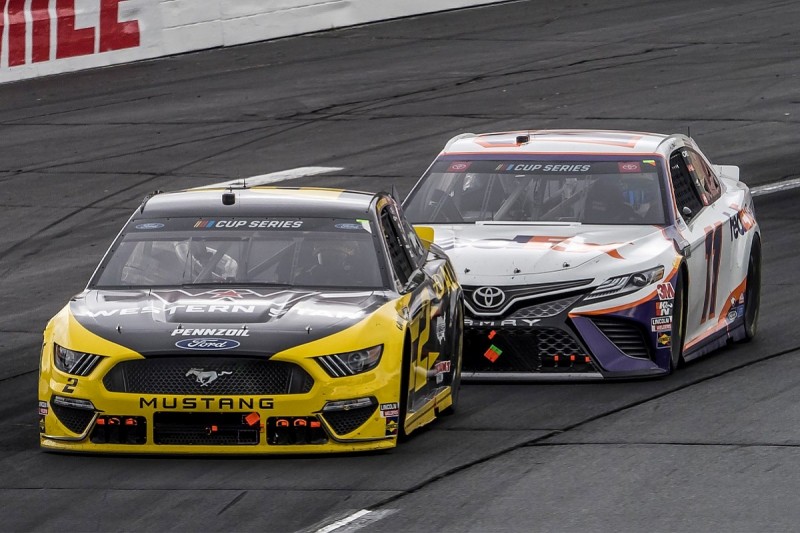 Just eight laps later however, John Hunter Nemechek rammed the wall after another blown tyre - allowing the likes of Kevin Harvick and Chase Elliott to respond, safe in the knowledge that they could make the flag without the need to save fuel.

Pre-race points leader Harvick became the prime benefactor in the scenario that any of the leaders ran dry, but the Stewart-Haas Racing driver was not afforded the opportunity to match Jeff Burton in 1997-99 and record three straight Cup wins at the 1-mile circuit.

The #4 Mustang did well to recover to take fifth, as Matt DiBenedetto ran a strong race to bank a sixth top 10 finish of the campaign for Wood Brothers Racing.

Aric Almirola and Kentucky winner Cole Custer ensured three SHR drivers were in the top eight - which was locked out by Ford and Toyota drivers.

The lead Chevrolet to finish was that of Elliott - who could not advance like Harvick in ninth - as Tyler Reddick nabbed 10th on the final lap.

Bowyer was 18th with Ryan Blaney ending the day 20th.

Kyle Busch's miserable title defence goes on - the #18 JGR machine clouting the wall within the first 10 laps, bringing about an early end to the race for the two-time Cup Series champion.