Elliott won the 2014 title in what was then the Nationwide series and was runner-up to Chris Buescher in Xfinity last year before replacing the retiring Jeff Gordon in the #24 Hendrick Motorsports Chevrolet Cup seat.

The 20-year-old's season has begun well with pole for the 500 and a hard-fought victory over Joey Logano in the Xfinity race, but Elliott played down the win's significance.

"The races are so different," he said.

"I think it's hard to really take a whole lot [from the Xfinity performance into the 500].

"The success [on Saturday] does not give any guarantee [Sunday] is going to go good.

"These bumpers on the Xfinity cars line up really well. They're flat.

"You can really give the guy ahead of you a real good shove pretty much anywhere around the racetrack, if you hit him in the right spot.

"The Cup cars are curved. You can't really do that as well."

Elliott drives for Dale Earnhardt Jr's JR Motorsports team in Xfinity, and Earnhardt believes his new Hendrick Cup team-mate will get a confidence boost from the win at the very least.

"He did what he had to do to keep the guy behind him. It won him the race. So I'm proud of Chase," said Earnhardt.

"He's going to do some amazing stuff in his career. It's awesome to be a little part of it.

"I think he certainly can gain a lot of confidence.

"You go out there and win these races, you feel like, 'Hey, I'm getting somewhere'. You're starting to learn, starting to build some confidence.

"He's got a lot of things on his plate. He's got the Cup season looming over his head. He's had a very busy off-season preparing and doing all the responsibilities outside of the car.

"For him to come in here and focus and get the win was real impressive."

His said advice to his son had been "to enjoy it" on Sunday regardless of the result and to remember the 500 can be an anomaly.

"I have told him that win, lose or draw he has to leave Daytona and forget about it because the normal season starts at Atlanta," said the 1988 Cup champion.

"Once he gets to Atlanta he can focus on the day-in and day-out of what racing is all about." 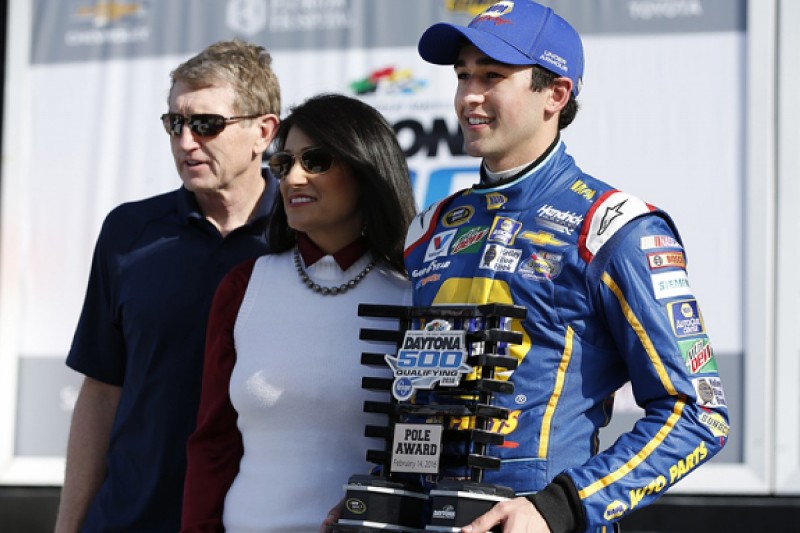