Chip Ganassi Racing's Kyle Larson believes that Martin Truex Jr, Kyle Busch and Kevin Harvick have been "head over heels" better than the rest of the NASCAR Cup series field

Larson finished second behind race-winner Truex and in front of Busch and Harvick at Pocono last weekend.

Truex, Busch and Harvick's victories now account for 11 of the 14 championship races so far in 2018, with Austin Dillon, Clint Bowyer and Joey Logano the only other drivers to have won this year.

Busch also leads the regular season standings by 87 points over Harvick's 537. Logano is third, with Truex now just 13 points behind the Penske driver.

When Larson was asked if he would be part of the championship four at Homestead-Miami alongside Busch, Harvick and Truex, he said: "I think three out of the four have definitely been the best.

"I'm the only one that doesn't have a win in the front four [Pocono finishers].

"I think three of those guys are definitely head over heels better than the rest of us, but I think from the fourth to sixth or seventh-best car, it's pretty close." 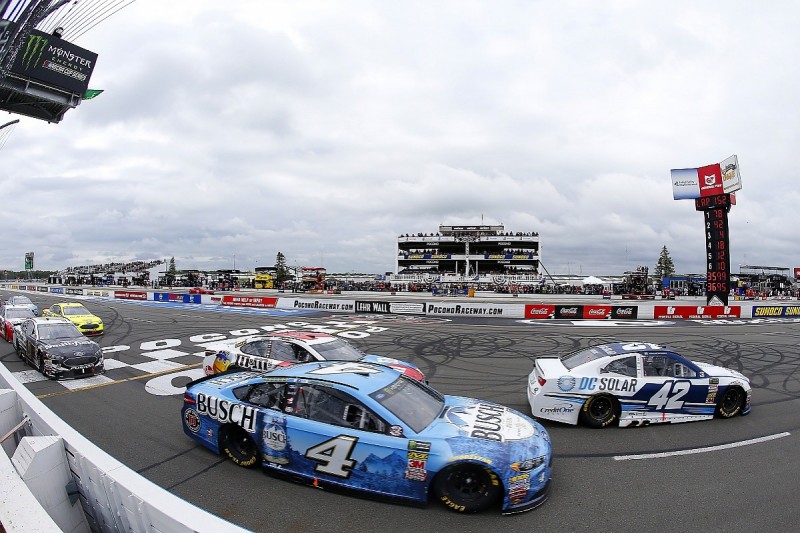 Harvick was fourth at Pocono after losing a spot on a late restart and said fine margins now separate himself, Truex and Busch.

"We just lost our track position of being in the lead and lost control of the race," he said. "That is what did us there.

"We restarted second and then third and lost a spot on each restart as you start on the inside.

"Our Ford was really fast, and the guys did a really great job. When you are racing the #18 [Busch] and #78 [Truex], you are splitting hairs, and they were just better than us on pit road."