© 2021 Motorsport Network. All rights reserved.
TV Buy tickets Store
Previous / Should NASCAR have a hybrid future? Next / Allmendinger felt he 'let everyone down' in Sonoma NASCAR Cup race
NASCAR / News

Martin Truex Jr won the NASCAR Cup race at Sonoma, becoming the first repeat winner at the road course for a decade

The reigning champion started the race on the front row of the grid, and first took the lead at the end of the third lap.

Although he began to stretch out a lead in the first stage, he would ultimately surrender the first segment win to AJ Allmendinger as he took an early green flag pitstop, while Allmendinger held off until the competition caution to take his first stage win since the format was introduced.

Kevin Harvick proved to be Truex's closest challenger for victory. The pair led at the start of the second stage following the full pitstop cycle, and fought at the front until they again pitted just before the end of the stage in order to gain track position at the race restart.

Pit strategy would prove to be key to Truex's win, making his final green flag pit stop eight laps later than Harvick - halfway through the final stage - allowing him to build up a lead over the Stewart-Haas driver, while also having fresher tyres.

Harvick moved back to the lead with 28 laps to go, but Truex's tyre advantage proved too much as he moved to the fore with 20 laps remaining.

From then on the Furniture Row driver began to eke out a sizeable lead while Harvick and third placed Clint Bowyer both opted for an additional pit stop in the hope of a late caution which never came. 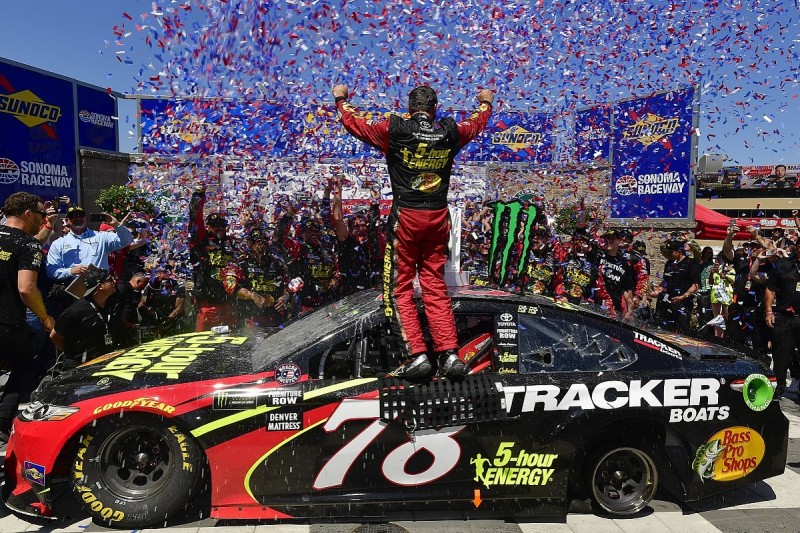 In the end Truex won by 11 seconds over Harvick, who regained second place in the closing laps of the race with his newer tyres proving to be an advantage, although Truex's lead proved too big to overhaul under green flag running.

Truex led the most laps in the race, doing so for the third time in a row on a road course.

Clint Bowyer regained third, ahead of Chase Elliot who spent much of the race inside the top five.

Kyle Busch rounded out the top five after a relatively quiet race, beating brother Kurt and Erik Jones who recovered from an off-track excursion to take seventh.

Aric Almirola, Alex Bowman, and Denny Hamlin - who won stage two after staying out while the leaders pitted - completed the top ten.

Stage one winner Allmendinger retired nine laps into the second stage with engine failure caused by a missed shift.

The incident caused the only normal caution of the race, and during the resulting yellow flag period, Jamie McMurray also retired due to a similar issue.