Chase Elliott claimed his third NASCAR Cup win of the season in Kansas, as third place finisher Kyle Larson just missed out on a place in the Round of 8

After running in the bottom half of the top 10 in the first two stages, Elliott came through to snatch second from Ryan Blaney early in the final stage.

He was promoted to the net race lead after Kevin Harvick, who had battled at the front of the field throughout the race, was handed a penalty for speeding in the pit lane.

Up ahead, play off competitor Brad Keselowski was risking an alternate strategy in an attempt to find a way through to the Round of 8.

The Team Penske driver stayed out late, hoping a caution would gift him a free pit stop, but he eventually had to come in under green flags.

Elliott came through to take the race lead, but he was not assured of victory.

Kyle Busch spent the closing stages of the race all over the back of Elliott's Chevrolet, but had to settle for second, finishing 0.903-seconds behind. 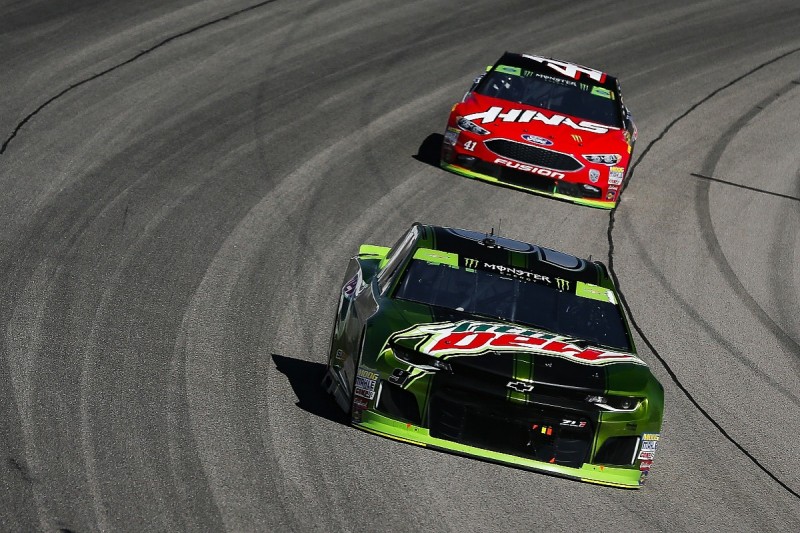 Larson bounced back from a difficult start to the weekend - the Chip Ganassi Racing driver badly damaged his car in practice and struggled to find pace in qualifying - to finish third.

But, with the 10-point penalty he received at the last race in Talladega for a technical infringement upheld after an appeal, it still was not enough to seal his place in the next stage of the playoffs.

Erik Jones took fourth ahead of Martin Truex Jr and Keselowski, who also failed to score enough points to continue to the third playoff stage.

Polesitter Joey Logano dominated the opening stage, leading 60 of the 80 laps and only briefly losing the race lead after the pit stops.

His team-mate Ryan Blaney inherited the position with a quick two tyre stop, but he could not hold onto the race lead and dropped back to third, behind Harvick, before the end of the stage.

Harvick's second place in stage one was enough to secure his Round of 8 position.

The trio continued to battle at the front of the field in stage two, with Harvick snatching the lead 22 laps before the end of the stage, where Blaney took second ahead of Logano.

Logano's race came undone in the caution period at the end of the second stage, as a hose was caught under his car during the stops, delaying his getaway and dropping him out of the lead fight.

Blaney also could not repeat his stage one and two performances and ended the race seventh, just ahead of Logano.

After making contact with the wall early in the race, Alex Bowman took ninth but will not continue into the third playoff stage.

Aric Almiola finished 10th, but he continues to the next stage due to his win at Talladega last weekend.