Kevin Harvick claimed his seventh NASCAR Cup Series victory of 2020, clinching the regular season title with a race to spare

Jimmie Johnson held onto third after an early penalty for speeding on pit road and was sent to the back of the grid, but still lies four points outside the playoff positions.

It was another clean sweep of victories for Harvick, who started 17th.

He spent most of the first stage in the midfield, but charged through the order late in the stage and passed Ryan Blaney for the race lead on the final lap.

Pit strategy put Joey Logano in the race lead midway through the second stage, but Harvick was again able to make the move stick on track and ended the stage ahead.

The Stewart-Haas Racing driver appeared to have the race under control through the final stage until a spin from Corey LaJoie brought out the caution with 22 laps remaining.

Like most of the frontrunners, Harvick pitted for four fresh tyres, but was beaten off pit-road by Johnson.

Johnson had been sent to the back of the field at the start of the second stage, and had been slowly working his way back into the top 10.

The Hendrick team replaced only the left-hand tyres of Johnson, saving valuable seconds that put him just ahead of Harvick when racing resumed.

Johnson wouldn't hold the race lead for long as Harvick stormed back into the lead on the restart, and appeared to be loose as he tried to defend against Martin Truex Jr and team-mate William Byron.

Truex found a way through, but Johnson held onto third, closing the gap to Byron who is now only four points ahead in the championship standings.

After suffering severe damage in Saturday's race, Alex Bowman was forced to start the second race of the Dover double-header in his spare car.

He made good progress up from 21st at the start of the race, gradually making his way up the order to finish fifth ahead of Logano and Aric Almirola.

Denny Hamlin just missed out on the top 10 at the end of stage one, finishing 11th, but had gained four positions in the race off pit road. 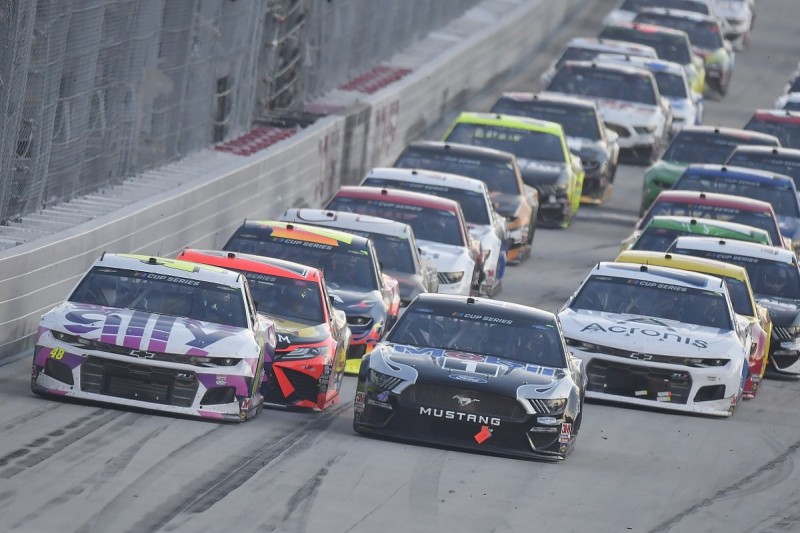 Before stage two could begin, the race was red flagged as a patch of tarmac, laid overnight, was damaged.

On the restart, Hamlin made up another two positions to run fifth and had climbed up to third by the end of the stage.

He snatched second from Logano when racing resumed, but was forced to pit at the end of the lap due to a loose left wheel.

The unscheduled stop dropped him back out of the top 10, and he eventually took the chequered flag 19th.

Chase Elliott was taken out of the action early on, as three separate incidents brought out the caution less than 10 laps into the race.

The biggest incident came after Logano and Ricky Stenhouse Jr made contact and Stenhouse was spun round, hitting the inside wall hard.

Almost simultaneously, Garrett Smithley and Joey Gase span and Elliot ran into the back of Kyle Busch.

Stenhouse, Smithley, Gase and Elliott were all forced to retire, while Busch was able to continue with minimal damage to the rear of his Toyota.

Brad Keselowski finished eighth after fighting towards the front of the order early in the race, while Austin Dillon and Cole Custer completed the top 10.