Elliott, who has already earned 500 pole position after last Sunday's qualifying session, led the field for the first Duel race and ended up at the front after 60 laps as the lone Hendrick car.

While Team Penske's Brad Keselowski looked to be showing his usual blistering form on restrictor-plate tracks - leading for the majority of the race and after the competition caution on lap 25 - Elliott took his lead back with a third of the distance remaining.

Elliott threw in some spirited blocks at the end to hold off Chip Ganassi Racing's Jamie McMurray and Kevin Harvick, who finished second and third respectively.

McMurray will therefore start in third on Sunday, with Harvick fifth and the rest of the field for the first Duel filling up the rest of the odd-numbered positions on the inside lane. 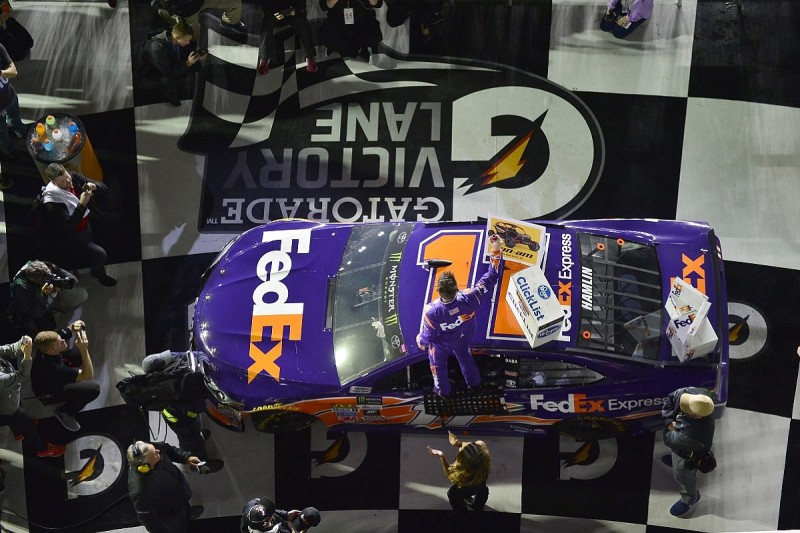 In Duel two, which decided the even-numbered starters, Dale Earnhardt Jr led all but five laps but was overtaken by Joe Gibbs Racing's Hamlin just before the finish.

Earnhardt will start second on Sunday regardless, owing to his strong qualifying performance last weekend.

Reigning champion Jimmie Johnson's woes carried over from the Clash, in which he spun out twice, with his car's pace far off his Hendrick team-mates.

Johnson made contact with Ryan Blaney of Wood Brothers with less than 15 to go, losing a right-front tyre and sustaining damage that will force him to use his back-up car on Sunday.

Under the new scoring system, points were awarded from 10 to the first place finishers down to one for the 10th place finisher in both Duels.

These races also determined which two non-charter entries would take to the track for the Daytona 500.

Premier Motorsports' Reed Sorenson looked to be outperforming BK Racing's Corey Lajoie throughout Duel one but both made contact with 12 laps to go and Sorenson hit the infield wall hard, sending him to the back and guaranteeing BK Racing a spot in Sunday's race as Lajoie finished 18th.