In the second race of NASCAR's return following the coronavirus pandemic-induced hiatus - the first Wednesday NASCAR race since Richard Petty's 200th victory at Daytona on 4 July 1984 - Joe Gibbs Racing driver Hamlin did not pit with the rest of the leading gaggle on lap 195 of the scheduled 228 following a Matt Kenseth-inspired caution.

Hamlin instead opted to stay out on the scrubbed Goodyear tyres his JGR crew had installed onto his Toyota Camry 14 laps earlier and formed a breakaway gaggle from the pack with team-mate Kyle Busch and Hendrick Motorsports' Chase Elliott when racing resumed on lap 199.

Entering the pit-straight on lap 201, with Hamlin in front, Busch tried to tuck under the rear-wing of Elliott's Chevrolet Camaro, but the reigning champion misjudged the move and fired Elliott into the pit-wall.

As the caution flags flew whilst Elliott's car was cleared, and him giving Busch the one-finger salute, rain began to fall over the circuit, prompting NASCAR officials to curtail the race on lap 208.

This handed Hamlin his first victory since the season-opening Daytona 500 and the third of his career win at Darlington, having previously won at the tricky 1.3-mile oval in 2010 and 2017. 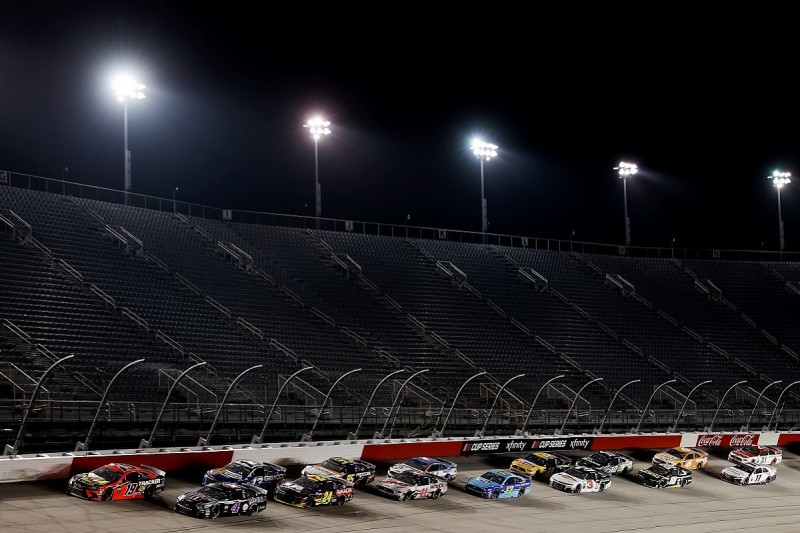 Kevin Harvick, who was victorious in the first Darlington race on Sunday, struggled in the early stages of the race mired in the midfield as the top 20 finishers were inverted from Sunday's race.

Running long allowed Harvick's Stewart-Haas Racing Ford Mustang to eventually rise to the head of the field, although he fell back in the third stage of green-flag running, complaining of no grip from his worn tyres.

He pitted under the Kenseth caution on lap 181 and brought home a third-place finish for SHR, ahead of fellow Mustang driver Brad Keselowski (Team Penske), who started sixth on the final restart.

Erik Jones, who was sent to the back of the field after scrutineering, drove an excellent race to fifth for JGR, despite a wall strike that left him nursing the Camry to the end.

Joey Logano and Aric Almirola had sensible races for Penske and SHR, respectively, finishing in sixth and seventh, ahead of seven-time champion Jimmie Johnson, in eighth for Hendrick Motorsports and the highest placed Camaro finisher.

Clint Bowyer won both stages one and two, although a spin on lap 195 ruined his chances of securing victory and contributed to a lowly 22nd place finish, whilst pole-sitter Ryan Preece retired with an engine failure early on.

How NASCAR led the world to arrive at the ‘new normal’

NASCAR News: Busch admits he made a mistake against Elliott