© 2020 Autosport.  All rights reserved.
Previous / NASCAR has "huge responsibility" with its return
Next / NASCAR: Odd without fans but teams came together

Stewart Haas Racing's Kevin Harvick eased to victory at Darlington as the NASCAR Cup series returned to action for the first time since March.

NASCAR had suspended its season following the outbreak of the COVID-19 pandemic following the race at Phoenix in early March, before a calendar re-jig ended with the first spring race at Darlington for the since 2004 resuming the season.

Brad Keselowski was drawn on pole position, with Harvick starting in fifth place in his Ford Mustang.

Keselowski led the first 39 laps of the 283-lap encounter, including through a scheduled competition caution on lap 30, to allow teams the ability to make adjustments to their cars - as there were not any practice sessions heading into the race - without the penalty of losing positions.

Shortly after the race resumed, the Hendrick Motorsport fleet, headed by Alex Bowman and seven-time champion Jimmie Johnson, began to reel in leader Keselowski's Penske machine, with Bowman assuming control of the race.

Johnson zipped past his fellow Chevrolet Camaro exponent Bowman on lap 81, as the leaders hit traffic - although Johnson would not go on to scoop just his third ever stage win, crashing on the final lap of the segment after contact with Chris Buescher.

His winless stretch in the Cup series now stands at 100 races.

William Byron spared Hendrick's blushes, scooping the stage win as with Denny Hamlin, Bowman and Harvick all in close attendance.

Harvick, curtesy of quick pit-work by his SHR crew won the race off pit-road and thereafter began to assert control over the race, as Keselowski kept him honest in second position. 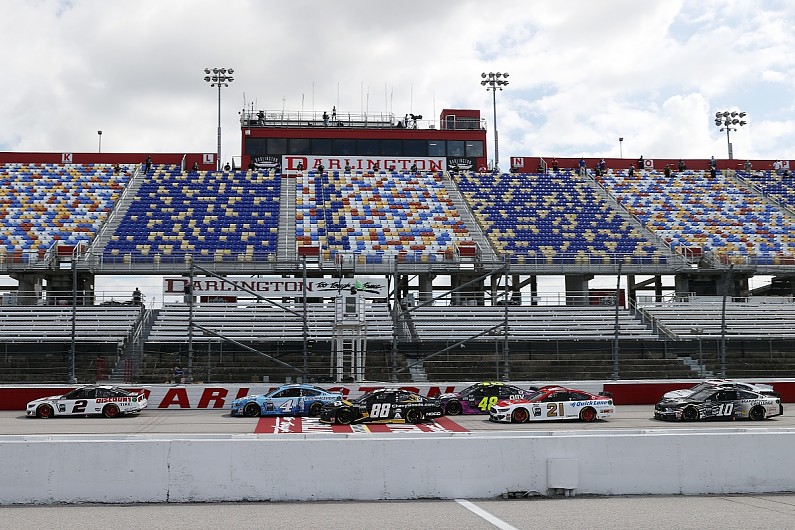 A spin for rookie Christopher Bell on lap 175 brought out the seventh caution of the afternoon, but this time SHR could not service Harvick as quickly, the #4 losing seven places with a slow left tyre change.

This handed Keselowski the stage win, although Harvick did climb back to fourth, Bowman and Martin Truex Jr filling second and third places, respectively.

The race then settled down with green-flag running until lap 253, when the returning Ryan Newman spun, and Harvick leading the charge to the pit-lane.

On the restart, Bowman briefly nipped past Harvick, but the 2014 champion held firm to record his first victory of the season, and the 50th of his Cup career.

Bowman took second, with Kurt Busch and Chase Elliott making it three Camaros in the top four. The lead Toyota Camry finisher was that of Hamlin in fifth place as Truex recovered from a difficult first half of the race to finish sixth.

On his return to full-time racing, replacing the sacked Kyle Larson at Chip Ganassi Racing, Matt Kenseth drove a sensible race on his way to 10th, with Keselowski 13th and Newman, racing for the first time since his violent Daytona 500 accident, 15th following a pit infringement penalty.

Joey Logano and Kyle Busch had quiet afternoon's for Team Penske and JGR, respectively, neither really featuring in the race and coming home 18th and 26th.

Ryan Preece finished in 20th position, and will start Wednesday's second Darlington race from pole position, as the top 20 finishers will be reversed for that event.

Share this article on Facebook Twitter LinkedIn Email
Previous / NASCAR has "huge responsibility" with its return
Next / NASCAR: Odd without fans but teams came together
© 2020 Autosport