Erik Jones scored his maiden NASCAR Cup series victory in a chaotic Daytona race, in which more than half the field was eliminated in various accidents

Joe Gibbs Racing driver Jones narrowly edged out his former team-mate and reigning champion Martin Truex Jr, biding his time with a quiet run to victory as others crashed out.

Kevin Harvick had been battling with Truex for the lead late on until a late pile-up caused an aborted race finish, which resulted in Harvick being collected in a collision between Darrell Wallace Jr and Clint Bowyer and meant the lap counter was wound back to two laps remaining.

A similar approach to Jones paid dividends for AJ Allmendinger, who finished third after a quiet run in midfield throughout.

Kasey Kahne led several laps and drew alongside Truex after the race's final restart, but ran out of momentum and dropped to fourth by the chequered flag.

Chris Buescher and Ty Dillon in fifth and sixth were further beneficiaries of high attrition. A fuel pressure problem early in stage two for Dillon proved to be a blessing in disguise, helping him avoid a large pile-up shortly after. 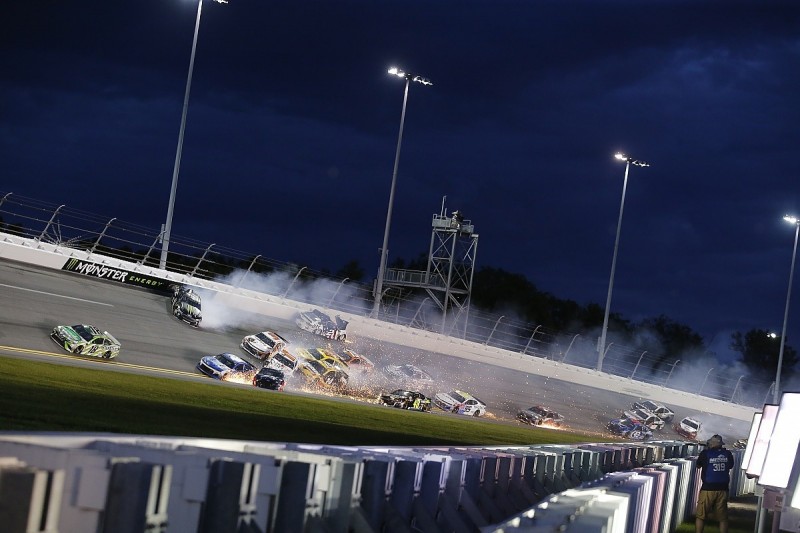 Ricky Stenhouse Jr contributed to that accident when he spun Keselowski into the path of oncoming traffic behind, though a late block by Hendrick rookie William Byron had caused Keselowski to slow in front of Stenhouse immediately beforehand.

Despite winning both stages one and two, Stenhouse had a difficult race through involvement in multiple cautions thereafter.

He understeered wide and spun championship leader Kyle Busch into Byron almost immediately after his contact with Keselowski, forcing both to retire from collision damage.

Stenhouse's recovery drive was thwarted twice, firstly after being collected by a spinning Kyle Larson, then spinning out himself with a puncture caused by panel damage from clashing side-on with Aric Almirola. He eventually finished 17th.

Go FAS driver Matt DiBenedetto scored a season-best result of seventh, ahead of Ryan Newman and Austin Dillon in eighth and ninth.

Despite being involved in multiple accidents, Alex Bowman emerged mostly unscathed on each occasion, nursing his Hendrick car home in 10th place.

Michael McDowell had been a surprise contender for victory throughout but his hopes were also ended by attrition, as StarCom Racing part-timer Joey Gase spun out and collected him, Almirola and seven-time Cup champion Jimmie Johnson.