Truex narrowly missed out on back-to-back titles in a 15-lap shootout following a late caution at this year's Homestead decider, with Penske's Joey Logano sweeping past to take his first crown.

Logano's victory denied Truex the chance to cap Furniture Row's final race in the series with a second title, with boss Barney Visser having chosen to close the operation down at the end of the year.

Truex and crew chief Cole Pearn are now heading to Joe Gibbs Racing, the team that Furniture Row had a technical alliance with.

Asked for his take on his five-year spell with Furniture Row that included a first title and 16 race wins, Truex said: "Best time of my life.

"I don't know what else to say. Those guys have been amazing.

"They've made me a superstar in NASCAR. I'm just very thankful for them all."

Truex admitted he was "not sure yet" how he felt about knowing he had driven the #78 Toyota for for the last time.

"I knew that last restart was going to be tough. We were able to get the lead, I just couldn't do anything.

"I was just slow for 15 laps. We turned and I'd try to go as fast as those guys and I'd be dead sideways and I just I couldn't do it.

"I don't know what else I could've done. He [Logano] passed me so fast I didn't even get a chance to do anything.

"Not the way we wanted to go out, but hell of an effort."

Truex was joined in the final four at Homestead by 2019 team-mate Kyle Busch, who had managed to haul himself into contention late on. 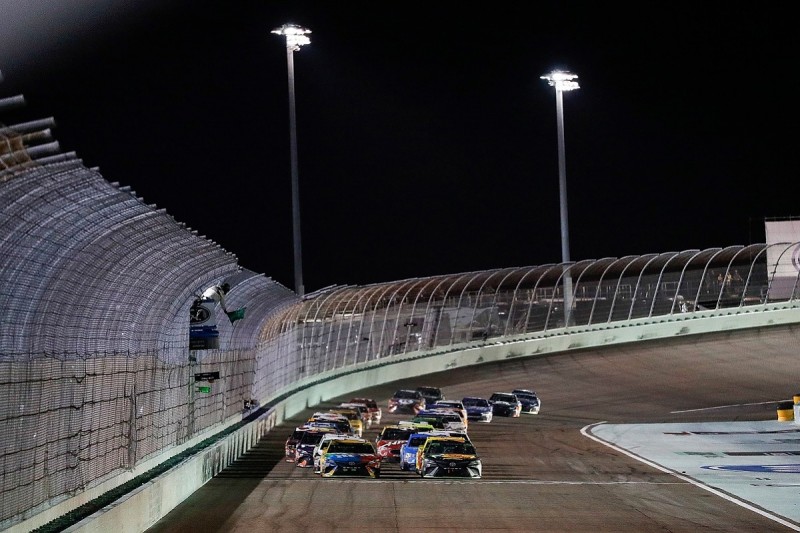 Two poor pitstops had initially prevented Busch from factoring into the lead battle as much as Truex, Logano and Stewart-Haas Racing's Kevin Harvick.

But a gamble by his crew chief Adam Stevens to keep Busch out late before a final pitstop in hope of a caution paid off when Daniel Suarez picked up a puncture with 17 laps to go.

Lining up on the front row of the restart, Busch fell back and ended the race fourth.

"I don't know where we missed it," said Busch. "I Just thought we were way closer than that [in qualifying] and felt pretty decent about things.

"[In the race] we weren't even close.

"Just no grip all night long, just sideways and no front grip, on the long runs we just couldn't enter the corners, and being unable to turn the steering wheel.

"Overall just a frustrating night. Adam called a great race, got us in position luckily, and everything came to fruition.

"But when you're half a second off, you're not going to hold anybody back."