Logano and Team Penske failed inspection four times on Friday and as a result Logano became the first Cup driver to sit out an entire practice session when he missed final practice, before an aborted qualifying attempt left him last on the grid.

The 27-year-old, who is not in playoff contention, said he did not understand why his punishment had to be served on pitroad.

"I had time for a lot of thoughts in there, mainly that it's a total joke," he said.

I guess that's mainly what I thought. I don't know why it has to be out on pit road.

"A penalty is a penalty. That's fine, but there's no reason to sit out there.

"I think it's dumb, but that's coming from a guy that just sat in a car for an hour sweating.

"That may not be the best thing to say, but it's true.

"I don't get it, personally. I think we can accomplish the same thing in a more professional manner."

Dale Earnhardt Jr also criticised the decision to make Logano sit on pitroad, tweeting: "No fucking way. That's silly to make him sit out there."

After a NASCAR official replied to his tweet defending the call, Earnhardt responded: "I've no issue with making him miss practice.

"Him sitting on pit road with what amounts to wearing a dunce hat is highly unnecessary.

"Missing practice is plenty of punishment. No need to bust out the dunce hat."

Earnhardt: NASCAR has to stop burnouts 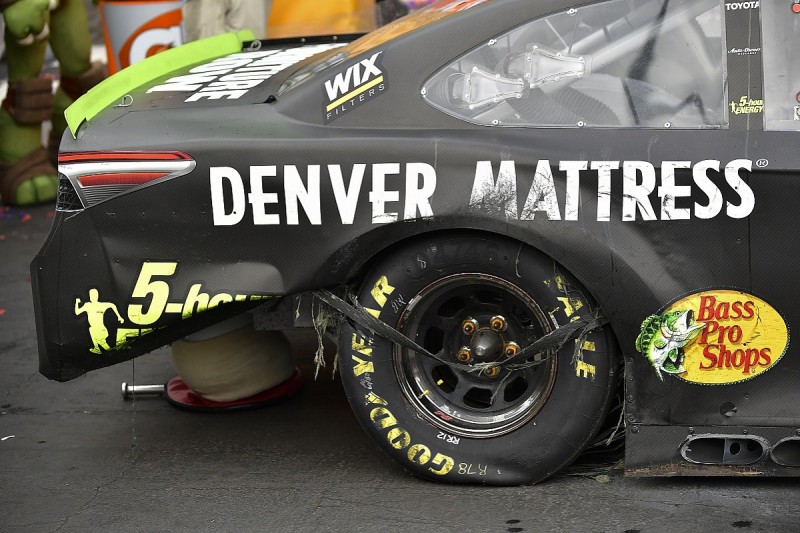 Earnhardt said NASCAR has to crack down on victory burnouts as a way of deliberately cheating the post-race inspection system, but believes the series is trying to avoid being seen as "fun police".

Martin Truex Jr celebrated victory in the playoff opener at Chicagoland with a burnout, while Chase Elliot's second place finish in the same race was encumbered after his car was judged to have had components modified for aerodynamic reasons.

Earnhardt said the discrepancy between the two cases was inexcusable.

"Once everybody started figuring out how to trick the underbody on the Gen-6 car and things like that, everybody blows the tires out," Earnhardt said.

"It's just hard for me to see the logic in suspending a crew chief, car chief for some tape flapping on the spoiler when the winner drives into victory lane with the rear of the car tore all to hell.

"I've been kind of waiting all this time for NASCAR to eventually say, 'look, you know we would just rather you guys not blow the tires out.'

"I just feel like that they should step-up. They're the governing body. It's obvious it's done intentionally."