A trio of pitstop problems proved no obstacle for Harvick, who was unaffected by two wheelgun failures during his first two stops and quickly recovered three places lost after a slow pitstop at the end of the second stage.

Kyle Busch attempted a late challenge to Harvick's unassailable lead, the Joe Gibbs Toyota driver staying out longer than the other frontrunners in his penultimate stint.

His fresher tyres in the closing laps allowed him to scythe his way up to second place, though he had no answer for the pace of Harvick's Ford.

Third-placed Kyle Larson was Chevrolet's only representative in the top 10, taking advantage of a late tyre drop-off from polesitter Ryan Blaney.

Reigning champion Martin Truex Jr stole fourth place away from Blaney in the dying laps, but Blaney held onto a top five finish thanks to Penske team-mate Brad Keselowski's own tyre wear issues. 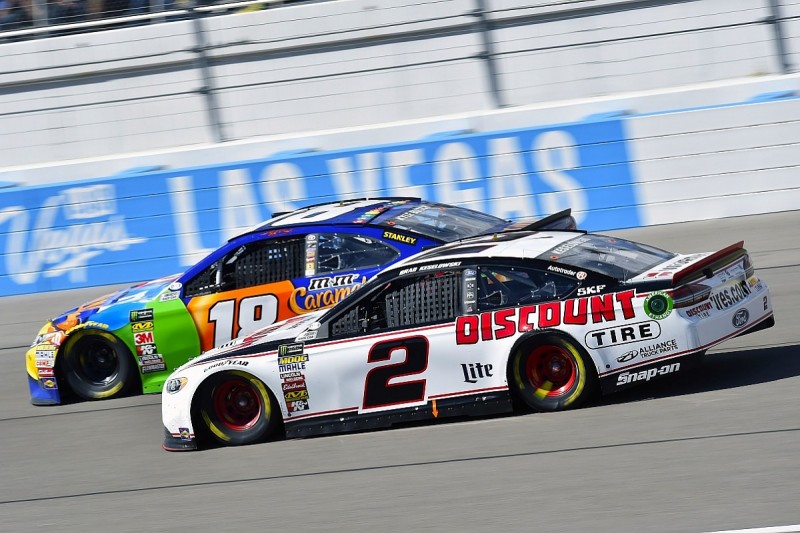 Keselowski was the first frontrunner to make his final stop, initially undercutting his rivals to take second. But his strategy backfired when the race stayed under green flag until the finish, leaving him to settle for sixth as those who had pitted later benefited from their newer tyres.

Penske's third driver Joey Logano took a gamble of his own with tyres following a caution caused by Jamie McMurray crashing at the exit of Turn 2 soon after the third stage began.

Taking right side tyres only, he went from being consistently at the front to fighting to stay in the top five, eventually finishing seventh.

Erik Jones, Paul Menard and Aric Almirola rounded out the top 10, with Jones and Almirola electing to stay out during the McMurray-induced caution and instead stop a few laps later after the other major incident of the race.

Both Chase Elliott and Kurt Busch were running strongly inside the top 10, but restarting after the caution period caused by McMurray's crash, Busch's Stewart-Haas car became loose, sending him up the track into the path of Elliott and putting both into the Turn 4 wall and out of the race.