Keselowski was caught up in a 20-car pile-up triggered by Ricky Stenhouse Jr in a dramatic attrition-filled race won by Erik Jones.

But the crash began when Byron blocked Keselowski, forcing him to check up before Stenhouse spun the Penske driver out.

Keselowski, who has yet to win a race in 2018, refused to blame Stenhouse for the incident, despite several other drivers criticising the Roush Fenway Racing man post-race.

"Ricky was doing the best he could to give me a good push and he had a great run to take the lead and the car in front of me [Byron] just threw a late, bad block," Keselowski said.

"I made the mistake of lifting instead of just driving through him and that's my fault. I know better than that.

"I've got to wreck more people and then they'll stop blocking me late and behind like that. That's my fault.

"I'll take the credit for my team and we'll go to Talladega and we'll wreck everybody that throws a bad block like that."

Keselowski took a further swipe at Byron for his inexperience, with the Hendrick driver joining the series as reigning second-tier Xfinity series champion for 2018. 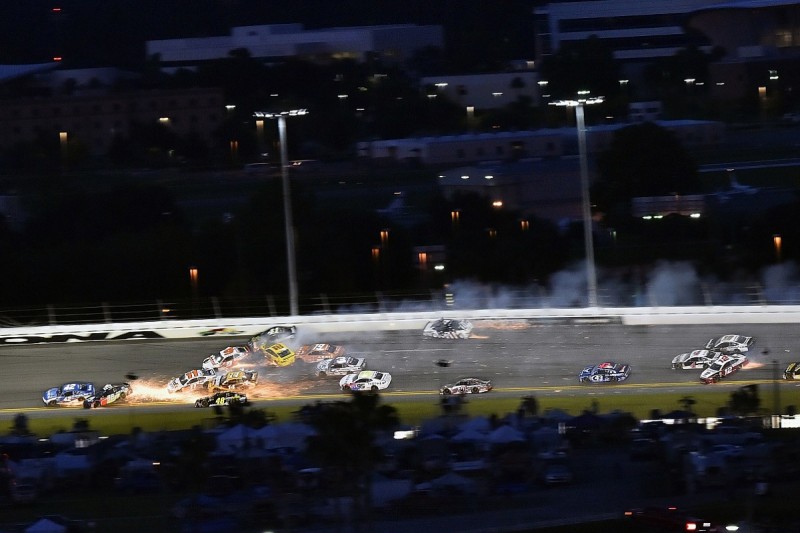 "You got a list of drivers that are making moves that are unqualified to make and it causes big wrecks," said Keselowski.

"That was one of those. It was my fault because I lifted. I should have wrecked him and sent a message to the whole field."

Keselowski's comments were put to Byron after he was cleared from the medical centre following the second crash of the race 11 laps after the first.

Byron placed the blame on Stenhouse.

"He [Keselowski] got hit from behind, so I didn't get hit anywhere," said Byron.

"If he would've hit me, I would've tried to move or save it, but I never got hit. "He just [got] hit from behind me [by Stenhouse].

"Everybody blocks as much as that, so I don't see any difference in it. He got hit from behind."