His third 2017 victory had looked like it would be even more comfortable as he had a 14-second lead over Kyle Busch, the polesitter and also winner of the Xfinity race earlier on Saturday.

Busch and Truex traded the lead through stages one and two but Busch slowed in stage three with oversteer and Truex pulled away.

The overtime period was triggered as Kurt Busch's Stewart-Haas Racing Ford suffered an engine failure and the yellow flag was flown with three laps remaining but Truex hung on to win as Kyle Busch slowed to finish fifth.

Kyle Larson was in contention for the lead having worked his way from the rear - having failed to make it through the pre-qualifying technical inspection - to third in stage one but a pitlane speeding penalty forced him into another recovery drive for the remaining two segments.

The Chip Ganassi racer had the pace to take most of the field, making it to fifth place within 70 laps from 40th place, but he had no answer for the dominant Truex. As a result Larson finished second, having pipped Kyle Busch on the final restart.

Chase Elliott was the highest-finishing Hendrick Motorsports racer in third, never gunning for the lead but taking his chances through his rivals' mistakes on new tyres in the closing stages, while Joe Gibbs' Denny Hamlin finished fourth. 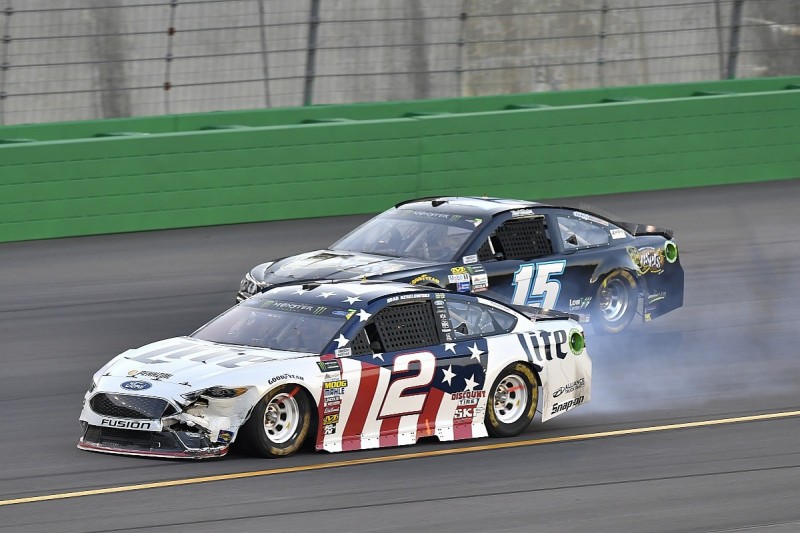 Team Penske struggled throughout, with Brad Keselowski retiring during the second 80-lap stage due to a collision with Jimmie Johnson and Clint Bowyer; Johnson's Chevrolet also sustained terminal damage. Logano is still without the crucial victory that would put him in the play-offs.

In what could be his final role as Aric Almirola's substitute, Richard Petty Motorsports' Darrell Wallace Jr finished 11th ahead of Dale Earnhardt Jr.

Matt Kenseth, doubtful for another season with JGR after his recent announcement, was on form for a top three finish but a crash on the final lap with JGR rookie Suarez classified him in 17th place.

Almirola to test at Charlotte to assess NASCAR return after injury